Today we will try to shed some light on one of the most mysterious german paper panzers, an assault gun based on the E-75 chassis.
A project with such little detail that is often dismissed as modeler kit bash, the stug E-75 is possibly the most elusive E-series project discussed by Ernst Kniepkamp’s team.

This gives a very ambitious project with a hefty engineering challenge.
For comparison, the Jagdtiger had a 12.8cm L/55, a gun just above 7m at 704cm.

Below, Krupp’s rejected proposal of arming Jagdtiger with a 12.8cm L/66:

At almost 8.5m long, the project was deemed unpractical as it would severely reduce maneuverability and likely gun traverse, changing it from a tank destroyer to armored artillery in Wa Pruef 6′s words.
At 7.8m, a 150mm L/52 would be halfway between the two guns in length although likely close to the latter in weight.

Assuming a relatively low recoil cannon (at this stage of the war HEAT would have been the preferred piercing warhead rather than hypervelocity APCR, especially at such high caliber) firing at no more than 600-700 m/s it’s likely casemate size requirements wouldn’t change from what would have been needed to house the 12.8cm Pak 44 and given that size would be very similar to the Jagdtiger (even the marginally longer Weserhütte plans gave out just enough room to allow rear transmission), meaning anything larger would be highly unpractical.

Assuming minimal engineering and base chassis modification efforts would be allowed (this is the E-series we’re talking about, so anything hampering ease of production would be likely avoided), this leaves us two possible possible configurations, one based on the aborted Jagdpanther mit 12.8 Pak 44 and the other being the classical Jagdtiger.

Using Doyle’s designs from Panzer Tracts 20-1 we obtain mixed drawings that might look a bit closer to what german engineers had imagined: 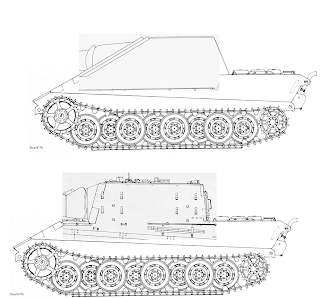 The former has the advantage of being closer to the original goals involving rear transmission, although a front casemate design with a long gun would present a large gun overhang, something that was considered undesirable with the long 128mm Jagdtiger proposal, although in this case the rear transmission pack would possibly provide more balance and avoid making the vehicle too nose heavy.

The Jagdtiger-like casemate closer to the center would instead provide better balance as advantage and be closer to historical production reality as it would require relatively less production changes from the design already in the assembly lines.

All in all, given the war ended before even the early suspension tests on a Tiger II hull could be completed this represents mostly an exercise in speculation, although one extremely interesting for the historically minded war-game fan.