With the upcoming line of British tank destroyers on the way, we can all expect some well known and exciting vehicles to take into battle, notably the Challenger, a heavily modified Cromwell mounting the near-legendary QF 17-pounder tank gun; faster, nimbler and lower than the Sherman Firefly, the A30/Cruiser Mark VIII “Challenger”, while hampered by delays was introduced just in time to see service in the final months of the Second World War. That is not the whole story though, the A30 Challenger, designed by Birmingham Carriage & Wagon Company, was not Britain’s only response to the increasingly larger and more sophisticated armour being produced by Germany during the war, but one of several designs, that emerged in the early 1940s. In late November/early December 1941, the British General Staff issued specifications for an ‘Assault’ tank and allocated the General Staff number A29 and was handed over to Rolls-Royce to design while Birmingham Carriage & Wagon Company was allocated the General Staff number A30. 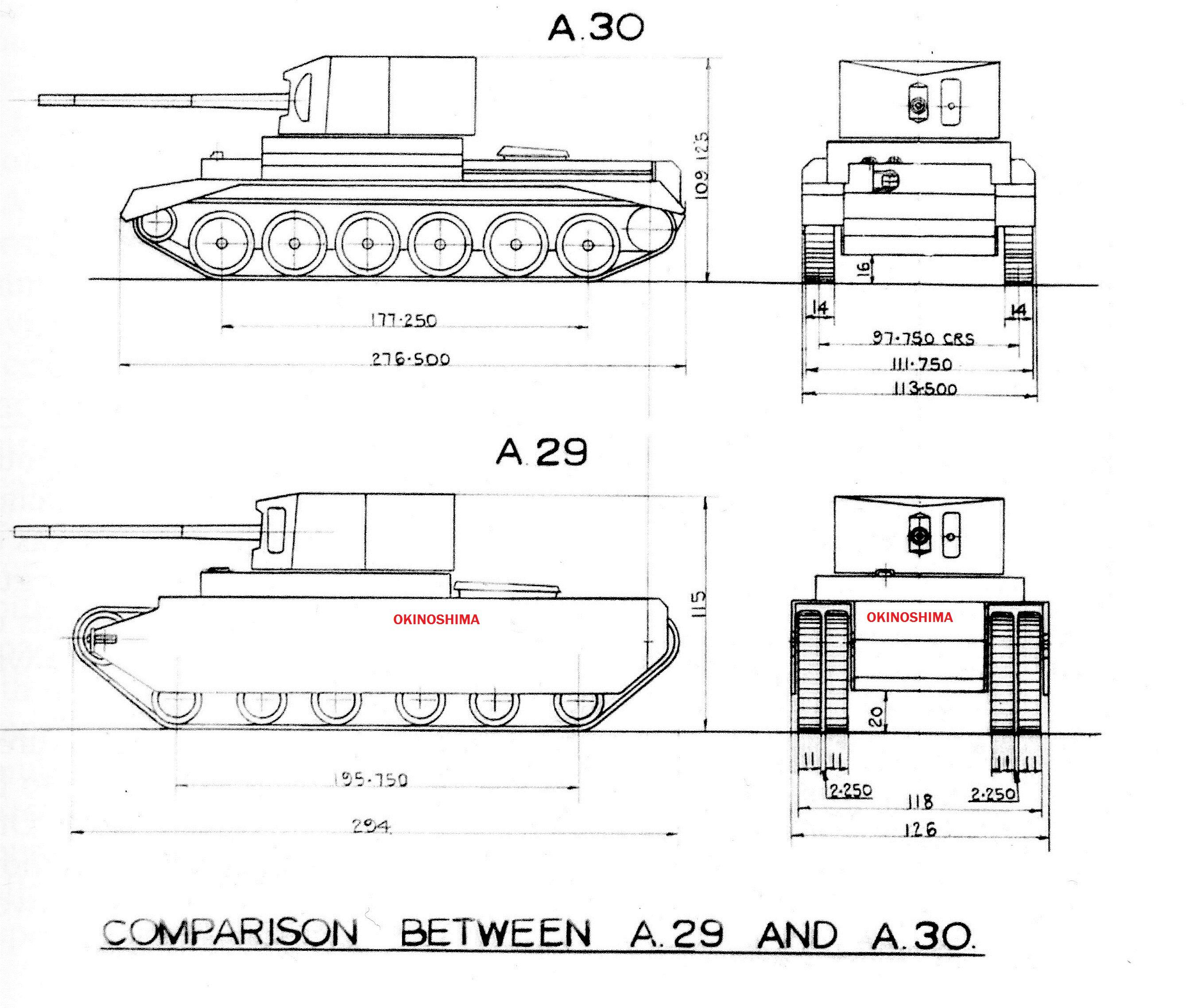 Rolls-Royce, although not as renown as Nuffield (Crusader) or Vauxhall (Churchill) was no stranger to tank design. Other than developing the Meteor engine, which powered many British tank designs, Rolls-Royce’s Clan Foundry in Belper also was involved in the redesign of the Cromwell Mark III tank. Clan Foundry used this experience to concieve the A29, which they had christened as ‘Clan’ after the foundry, where it was made.

The tank, developed by Rolls-Royce – although based on the Cromwell – was a behemoth, at 9’ 7” tall (2.92 m) and an estimated 43 long tons 5cwts (50.65 tons), of which 16 long tons was armour (the side by side sketch for the A29 and A30 are to two different scales). The front of both the hull and turret were 5” (127 mm) thick, and the side hull, including armour skirt, was 3½” (88.9 mm) thick. Like its rival design, the Challenger, it also was armed with a 76,2 mm QF 17-pounder gun, mounted in a turret similar to (but not exactly the same as) the one of Challenger (once again, it is worth noting the difference in scale of the two drawings). Although it is not mentioned in the written material, it is safe to assume that the Clan would invariably have an internal mantlet, adding to the frontal turret’s overall thickness like other contemporary British mantletess tanks. 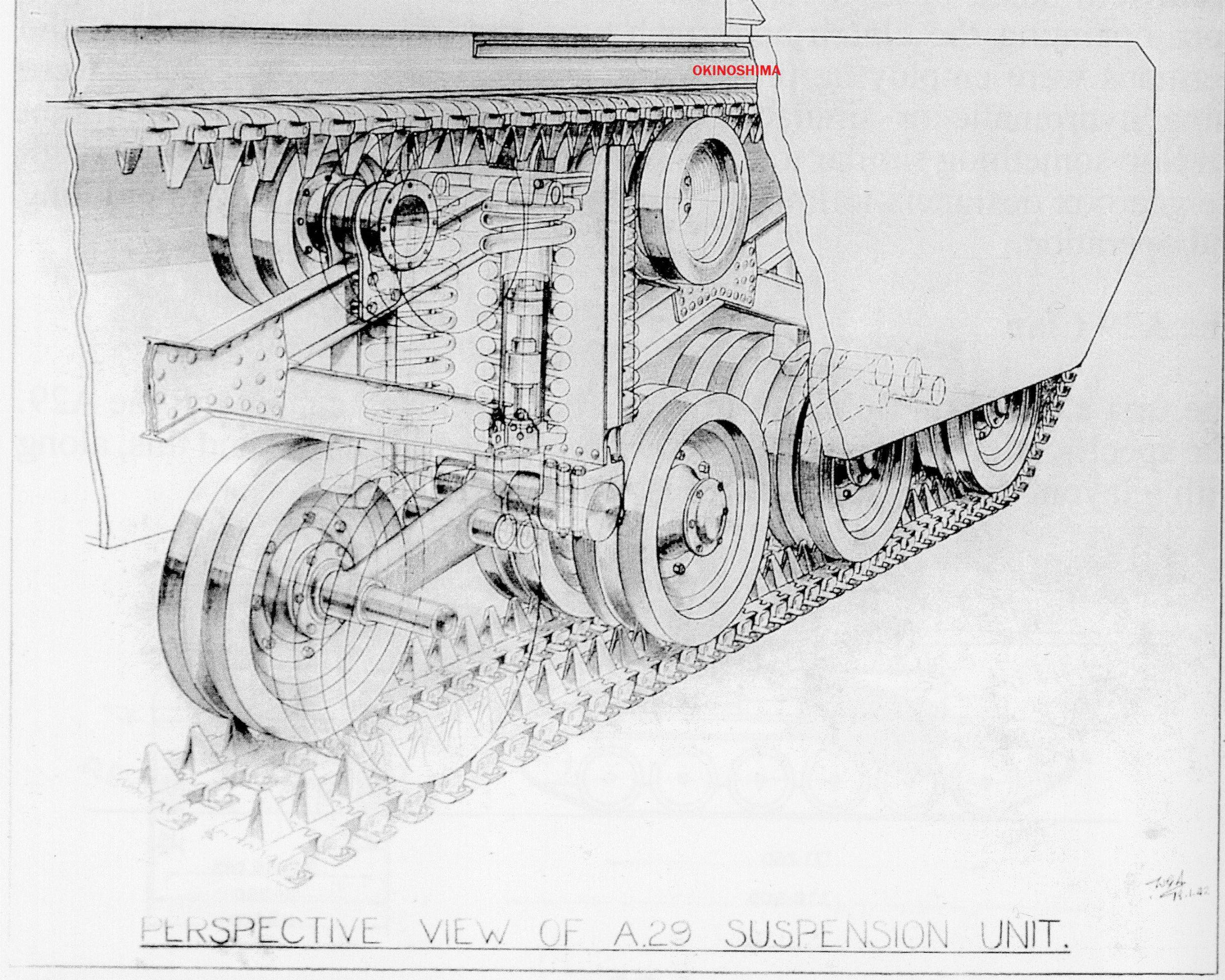 The A29 Clan was to be propelled by a Rolls-Royce Meteor engine, up-rated to 700 bhp, which would give the Clan a top speed of 30 mph (48.3 kph) and power to weight ratio of 13.82 hp/tons. All this added armour and a heavier gun and turret of course came at cost, the weight was far higher than the existing Cromwell suspension could bear. Rolls-Royce’s solution was a new separate twin track suspension design, each track was 11” (279.4 mm) thick for a total of 22” wide tracks (558.8 mm), which would give the Clan excellent terrain passability. Inevitably, issues arose with the new, complicated suspension system, which caused delays in the programme, pushing the expected development finish all the way past February 1943. This proved to be the A29 Clan’s undoing and the project was cancelled in favour of the simpler A30 Challenger design. Rolls-Royce attempted to address these suspension issues with yet another design, the A31, but it too was cancelled.

In game, the A29 Clan would prove to be an interesting and probably unusual tank. Given its 17-pounder armament, it really can’t be tiered anywhere below tier 6, so likely tier 6 or 7. As for its classification it is called an ‘Assault tank’ and a ‘Heavy Cromwell’ in different documents, this would fall under the category of heavy tank in my opinion, especially given its 50 ton weight. While 127 mm of armour is no slouch, it is also fairly flat but then again so is the the 100 mm hull of the Tiger I and the 120 mm vertical plate of the IS and KV-3. Probably the most interesting armour feature of the A29 Clan are the sides. While you’re definitely not going to get 558 mm of side armour from your tracks (they will likely get a nominal 40 mm of armour value like the similarly double tracked American T95) they will definitely ruin somebody firing HEAT’s day. The combination of a heavy armour skirt the large distance between it and the actual tank hull will pretty much nullify anybody trying to fire HEAT or HE directly into your tracks.

Another excellent feature is the Clan’s speed, while the p/w ratio is on the lower side (13.82 hp/tons) a top speed of 48.3 kph is rather good for such a heavy tank and its double tracks should provide excellent terrain resistance in-game which would make it a very mobile heavy tank (also probably very fun to ram light tanks with!).

I hope you enjoyed the article, hopefully I piqued your interest with the A31 because that will liekly be subject of my next article!

The Rolls-Royce Meteor: Cromwell and other applications by Evans, McWilliams, Whitworth and Birch
WO 291/1439 British tank data