today’s the 28th of September, one of Czech Republic’s most important holidays (the “Day of Czech Statehood”, an anniversary of our patron saint, St.Wenceslas’ murder) and so, we will talk about one rather important Czechoslovak project, that started the long road towards the Vz.38 light tank. Its name is TNH and it was built for one of the most exotic customers: the Shah of Iran. 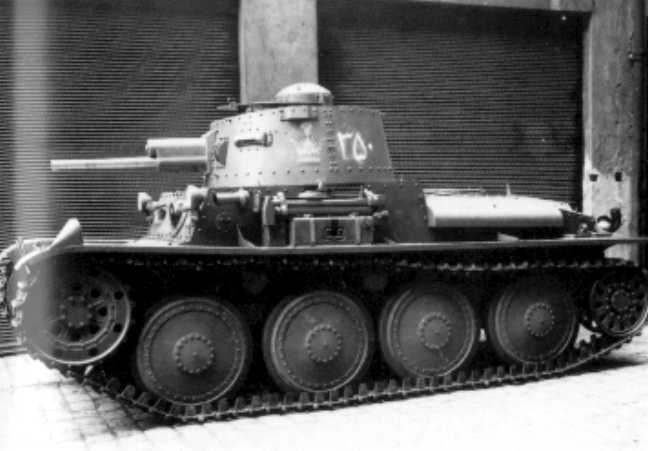 A little bit of history first. The early 30′s in Czechoslovakia were marked by Škoda and ČKD competing for the Czechoslovak army contracts. As a sort of by-product, large amounts of various proposals and designs were developed and seeing their potential, both companies tried to (with various degrees of success) sell them to various exports markets. Both companies had a sort of uneasy relationship – on one hand, they were the dominant market force (a cartel, which, at that point, was not illegal) and when it came to making money, they could set their differences aside. On the other hands, their history is full of stabs and unkept promises.

In the case of export however, both companies got somewhat along. ČKD achieved a breakthrough in its export attempts, when it was contacted by the representatives of royal Persia (Iran) in early January, 1935. ČKD responded by offering their newest developments: the TNH light tank and the AH-IV tankette. In order to win his favour, ČKD sent the Shah of Iran a personal gift: the P-I tankette prototype. The gift apparently worked – on 14.5.1935, ČKD recieved an order for 30 tanks and 26 tankettes. Their guns were to be manufactured by Škoda and Zbrojovka Brno (ZB). This was even before the TNH prototypes were actually ready. At first, Škoda was reluctant and there was some bickering, but both companies quickly found common ground, when the Iranians threatened to order the guns in Britain instead. The consensus was also based on the fact that ČKD managed to incorporate the obligation, that ČKD tanks would only ever be delivered with Czechoslovak guns into the contract proposal.

With the promise of a (relatively) large contract, ČKD focused its efforts on building the prototypes. This was achieved by September 1935, by which time a Persian delegation, led by General Ismail Khan (head of the equipment procurement committee in Paris. The committee witnessed the prototype trials and despite the vehicle was still missing its gun and machineguns, it impressed the Persians so much that the order was increased as early as 10.9.1935 to 50 tankettes and 50 TNH tanks. At that point, ČKD ordered 60 37mm guns and 160 heavy machineguns from Škoda and ZB. The deal was on.

The prototype was quite advanced for its time and well built. It was riveted – the armor plates were 15mm thick at frontal parts, 12mm thick on the sides and 10mm thick on the rear, quite sufficient armor for 1935. The turret had a cone shape with thicknesses corresponding to the hull. There were two types of turret front design – they differed by the shape of the turret machinegun mount (one had a sort of “bulge” in front for better operation).

The vehicle dimensions were as such:

The suspension was quite original and new for its time. Four large roadwheels (775mm diameter) with rubber bands (120mm wide). The wheels were connected in pairs to a band of leaf springs and were manufactured from 6mm thick armor plate in order to provide partial protection to the suspension mechanism. The track was 293mm wide. The vehicle drive sprockets were in front (637mm in diameter), the rear sprockets had a diameter of 537mm.

The vehicle prototype was powered by the Praga TN (3rd Series) 7,793 liter gasoline engine, producing 92 horsepower at 1700 RPM, which would (in mass-produced vehicles) be later upgraded to Praga TN 100, an advanced version of this engine, re-bored to 7,942 liters, producing 104 horsepower at 2000 RPM. The vehicle weighed 8,2 tons (12,68 hp/t with the advanced engine) and was able to go as fast as 37,8 km/h. The transmission was semi-automatic, planetary, Praga-Wilson type with 5 gears forward and 1 gear back. The entire transmission and steering setup was highly valued for being very rugged and allowing very smooth ride. The vehicle was armed with one Škoda 37,2mm A4 Beta (modified A4 AT gun) and two BT-53 7,92mm heavy machineguns.

The name of the tank, as you guessed probably, was derived from the engine, the H at the end means “housenkový” (tracked). The vehicle was mass-produced at the ČKD factory branch in Slaný. In the meanwhile, two prototypes built were rigorously tested by the engineers and Iranian observers, who demanded series of practical improvements, that were incorporated into the mass-produced version. These improvements included specifically the tropicalization demand (to make the vehicle suitable for hot climate areas) by increasing the efficiency of engine and combat compartment cooling. Furthermore, higher engine power was required (leading to the TN 100 upgrade) as well as better visibility from the tank, new transmissions and diffent type of bow machinegun mount. The original vehicles came without radios, they were however upgraded in 1940 with German Telefunken sets.

Because of these demands, the production of the vehicle, while steady, was slow. The first 12 TNH tanks were shipped from the German port of Bremen to the Abadan port in Iran (and from there by rail to Teheran) in August 1936, 11 more vehicles followed them by the end of the year. The remaining vehicles arrived in Teheran only in May 1937. The armament was sent in a separate shipment – the vehicles had to be assembled in Iran and to that end, a group of ČKD technicians was sent to assist with the task. All the vehicles were thus ready for service in November 1937. Altogether, 50 tanks plus one prototype (as a training tank) were sent to Iran. The price of one piece was 3570 GBP. At that point, Praga designated the mass-produced version TNH-P (P for “perský” – Iranian), Iran itself called them simply TNH. 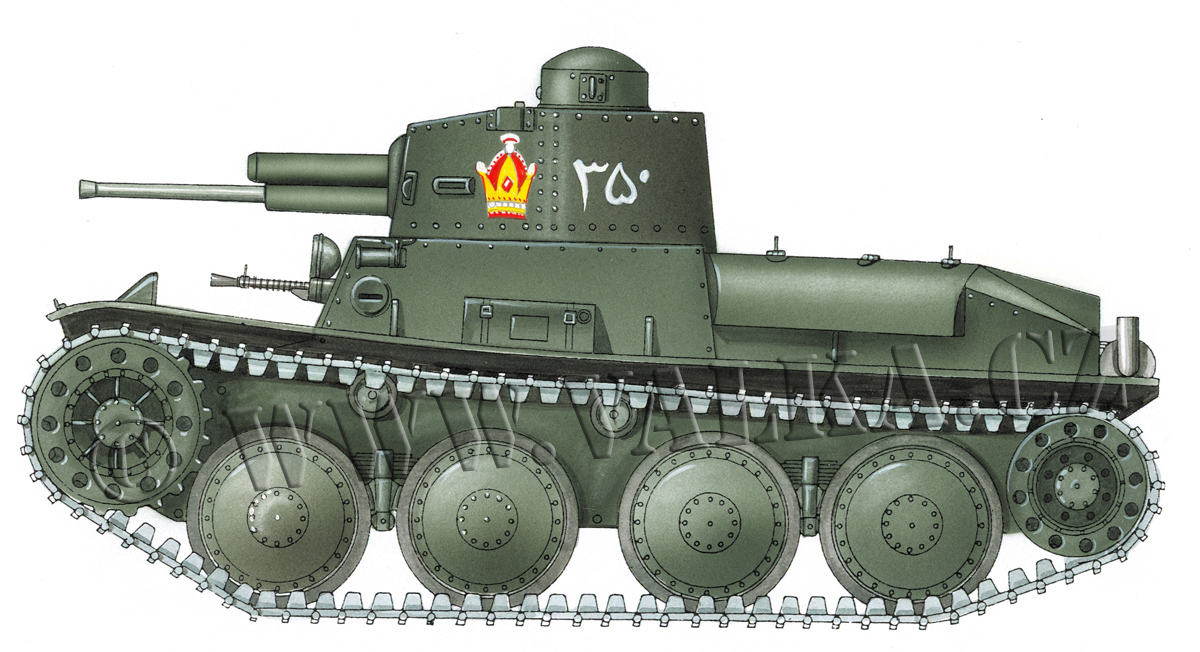 Along with the technicians, Czechoslovak advisors were sent to Iran to assist with the re-organization of the Iranian army armored units and with their training. A ČKD representative, Ing. John Wasgestian, was the ČKD representative in Iran for technical and business matters until 1943. He was tasked by the Iranian Ministry of Defense with overseeing the vehicle repairs in both the central and field repair shops, he also participated in the creation of plans for full motorization of the army of Iran and the organization of its repair capacities. This all was required due to the unwillingness of the “old guard” of Iranian officers to work with tanks and the low level of training (at times, illiteracy) of Iranian soldiers themselves, as well as lacking technical capacities of Iran.

The TNH tanks were assigned to the 1st and 2nd Division of the Iranian Army (25 vehicles each) along with the AH-IV tankettes. In 1940, an entire mechanized brigade was formed in Teheran, armed with two batallions of Czechoslovak tanks and tankettes, one batallion of British armored cars, one motorized infantry regiment, one motorized artillery regiment and a few more heavy weapons units. The tanks proved to be resilient and sturdy in the rough, dry and sandy Iranian environment, the only problems they had were of non-critical nature.

The Iranian army was quite happy with the tanks. There were plans and proposals to buy 100-300 more (of both types – AH-IV and TNH) in late 30′s, but unfortunately, war interfered. Nevertheless, the tanks served until 1957.

In WoT, this is an alternative candidate for the tier 3 light tank (with sufficient upgrades of course, the TN platform was used for several vehicles – consider the vehicle described above as “stock” tier 3). Under normal circumstances, it would be quite okay as it was, but there is a better candidate for tier 3 (another TNH derivate), the famous LT Vz.38 (possibly the best tank ever produced by Czechoslovakia). As such, the TNH could find a place in the second “light” branch of Czechoslovak tanks. It has some options of upgrading (for example the Iranian proposal to incorporate the British guns, which, after some consultation with Listy, seems to have been the Vickers QF 47mm, which is already in the game, in Chinese tree strangely enough).

23 thoughts on “Praga TNH – Where It All Began”