with “Winter mode” soon to hit EU servers I wonder if you would like to read/post some heads up information. I have an account on RU cluster and took the opportunity to test this mode for a while.

This is what I have learned so far:

- The one and only thing you are interested in is damage. You get 0 XP/credits for winning, frags or cap/defense. In fact, the best way to screw the game for everyone, including yourself, is to smash your way to the flag and win by capping. XP, crew XP and credits are awarded only for completing special missions. In LTs player needs to do over 1700 damage, HTs – over 2500, TDs – over 3300. That’s it. Win or loose you get exactly the same reward as long as you do required amount of damage. Needless to say, results of these matches do not reflect on the overall account statistics. One more reason not to care for anything else but damage. Unlike regular matches though, you get the same reward whether you do 1700/2500/3000 or 7000 damage. After some time when “fun” part is no longer fun you can just rush the enemy as soon as you do required damage without playing to the end. I did not try leaving match while my tank was still intact. I can’t tell if “deserting” penalties apply in this mode.

- Speaking of the reward. It was slightly “nerfed” and now is 10.000 credits, 1500 XP and 1500 crew XP. Looks like usual special events like “double crew XP” apply if there are any at that moment. Every match where you do over 500 damage adds towards another special mission. When you complete it 25 times, you get awarded 250.000 credits, 25.000 XP and 25.000 crew XP. Repeatable 5 times for all duration of the event. This XP is awarded to the tank that completes 25th mission so if you want to boost certain crew’s training it’s worth to plan ahead a bit. Even with lowered rewards it took me 54 matches (including the ones where i failed to do required amount of damage) in LT to get first skill to 100% (you get tanks with 100% crew). I’m sure skilled players can achieve this even faster.

- Healing is completely useless feature. First, healing rounds cost 400 credits each and heal 200 hit points. Second, you only get a fraction of XP and credits compared to what you get for doing required amount of damage. Following screenshots illustrate what I mean:

It was a victory, I healed over 5K hitpoints but did no damage. My reward was only 2000 credits but I spent over 10.000 on healing rounds: 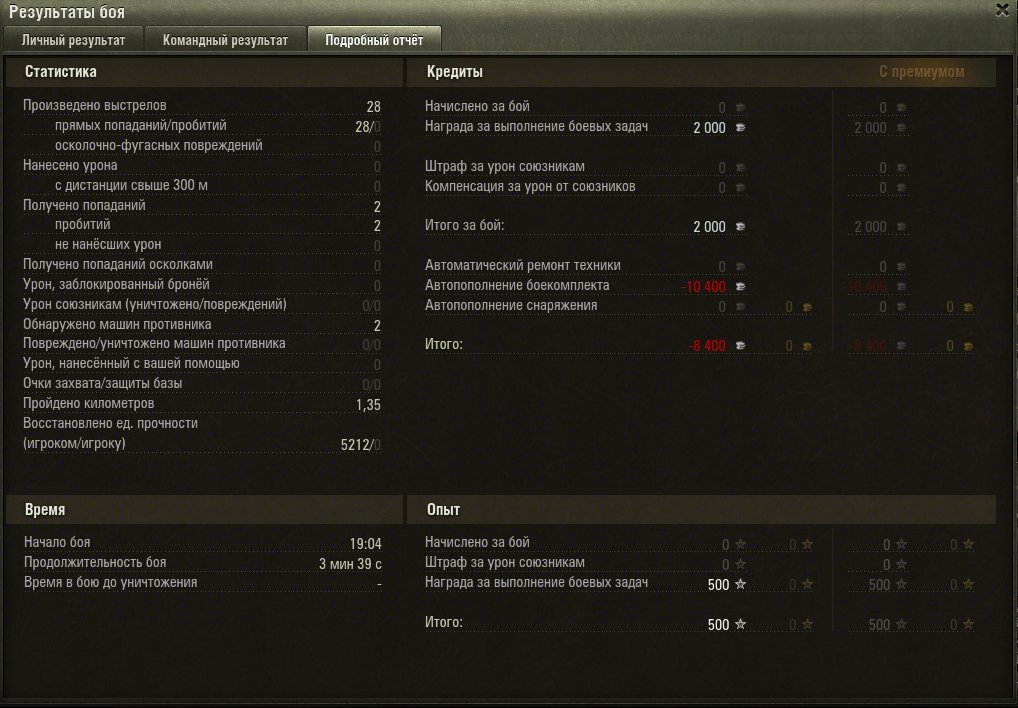 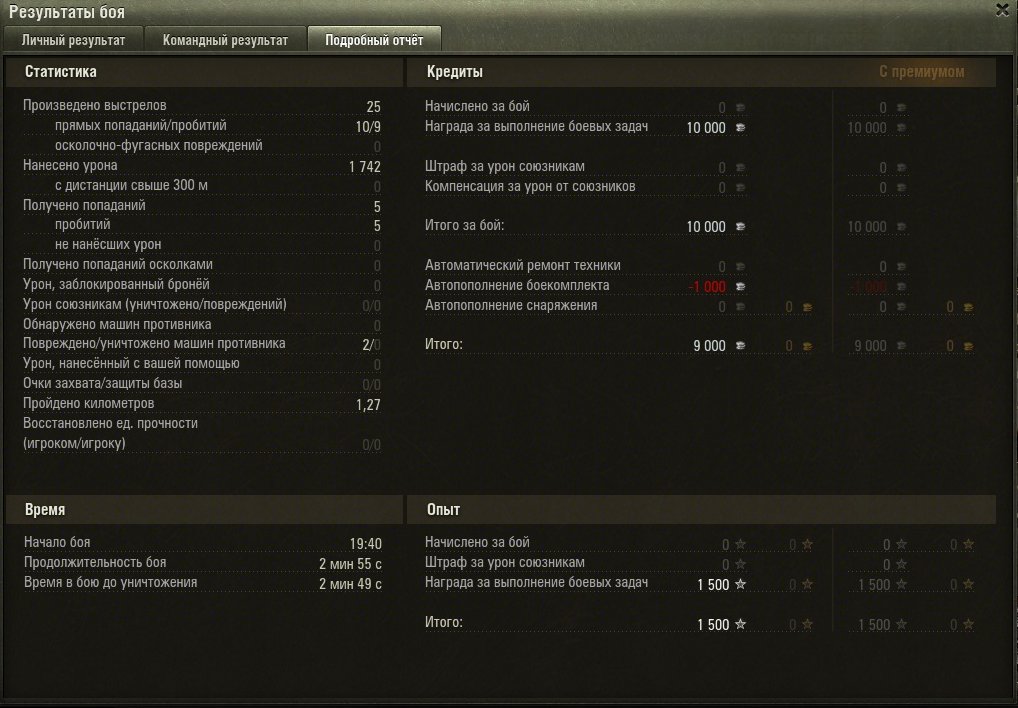 So, unless you’re really god and can both do damage and heal your allies, it is a rather prohibitive activity. Even if you succeed you’d spend most of the reward credits on ammunition resuply. Once again – winning counts for nothing. So there is really not much point in keeping your allies alive. Unless you are a really nice person. Doesn’t look like devs thought this one through.

- I get the feeling that LT is the trickiest vehicle of the three. The map is only 500x500m and every vehicle can scout for itself (not that you get any reward for scouting anyway). It only has 1500 hitpoints and the speed is not that usefull in maze-like map. The first enounter with TD can leave you with barely a third of hitpoints. Even if you go one-on-one with another LT and emerge victorious, you’ll only do 1500 damage of the required 1700 and most likely will be low on HP yourself. For comparison HT has 5000 hitpoints. You can simply facehug another HT and shoot at each other merrily until you do required 2500 damage – still only half of your own HP. The best way to play LT is stick to the group (behind it rather) and try firing sneaky shots every time enemy tanks are reloading after shooting your bigger allies. Then quickly fall back into cover. Or wait for the opportunity when enemy turns towards your team mate. Not much different from the regular LT tactics, sans the scouting part, i guess. And not unlike regular LTs, if you have a bit of room to maneuver, running away in a zig-zag makes it much harder to hit. Especially for HT with it’s painfully slow rounds. Although frags are not rewarded easy pray is still on most players minds. So LTs do get more attention if they join the fray.

- Angling* your tank is not much use as there is no armour to speak of. Although I did have some non-penetrating hits (to the gun most likely) these is rare. You need to keep in mind that hit to any part of the tank, including tracks, takes hit points away. Angling is only helpful as it shows small portion of your tank making you a smaller target and also lets duck into cover faster.

- Never go alone, especially in LT, stick to the group of at least 3-4 tanks. After the countdown wait for a few seconds and observe how other tanks disperse. You’ll not be late to the fray anyway because both teams start separated by destructible walls and will take a while to peck their way through.

- Destruction of a wall section has effect of “bricks” flying into the air. You can zoom out to see if there is such effect (and tunnel forming) from the enemy side ahead of you. If not it may indicate that the other team focuses their attack somewhere else.

- Two main directions of attack are 4 and 7 lines. Flanking attempts through 1 and 0 are also common. I’ve seen people trying to get to the base via the thickest wall in the middle. But then, in random battles there always are players who shoot aimlessly as soon as countdown ends… More common way to get to the base is through 4 line and then cut through thinner walls at E/F. 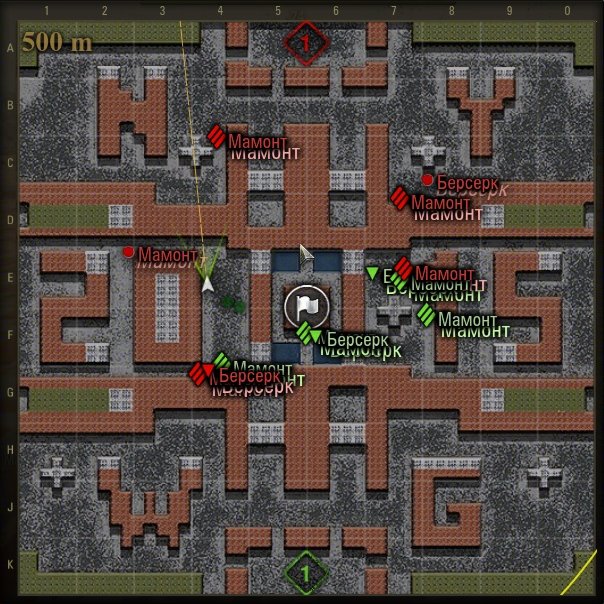 - If you suddenly encounter large group of enemy tanks, retreat to a position from where you can run away if needed. Again, armour does not work here. You can’t “tank” a bunch of enemies the way you probably could in regular T110E5 or Foch 155. Luring enemy in blind pursuit of the damage to the larger group of you allies does work surprisingly often.

- You have to be mindful about the nature of the map. It’s all straight corners. If you bump into one you get stopped immediately. Players often shoot only one block wide tunnels through the walls. They are barely enough to fit one tank and can be hard to make it through if you’re retreating in a hurry (i.e panicking). That’s where high speed of LTs can be a disadvantage.

- No module or crew gets damaged/injured – no need to equip consumables. I see no reason to use any equipment either.

- LT and HT fire shells that do 200 average damage. The shells however travel very slow and have high arc. Pretty much like HE of regular tanks. TD has faster shell that does 1000 average damage so it’s better suited for long range engagements. For some reason HT fires bursts of three rounds.

- As mentioned above, capping is not recomended as means to get the reward. But it can be used to lure enemy tanks to feed on their hitpoints. Be warned though. Cap circle is quite cramped with walls (sure, you can shoot them but enemy can shoot you while you’re at it) and is surrounded by four small ponds of water. They basically are square boxes, there is no way out once you stumble in. For some reason both teams can cap at the same time. I.e. it does not pause caping like it would in the Encounter match.

- As FTR readers already know, “Winter mode” caused compatibility problem for mods. Russian modmakers responded quickly. But if you encounter strange glitches (e.g. UI in garage messed up) try removing the mods. In this mode the only tool needed is hit log. I tested PROTanki (yes, the guy responsible for whiny bitchy disclaimer about other modmakers using his mods without asking permission) modpack and it worked fine. It has acceptable English localisation and preview during installation. I don’t like his attitude but the modpack is OK.

I think that covers the basics of “Winter mode”. I hope this guide is helpful enough to have more fun (or farm crews and credits more efficiently) once “Winter mode” arrives to EU servers.