today we will have a look at one of the armored forces, that gets often neglected by literature and usually deserves no more than small articles behind the Axis section: the armor of Bulgaria.

After World War I, in which the Bulgarian kingdom fought on Central Powers’ side and lost, its army was severely weakened and – as with other former Central Powers – forced by the Allies to accept certain conditions, limiting the number of men and weapons, while other types of weapons (including armored vehicles) being banned outright. The Allied committee, that oversaw the disarming of Bulgaria, openly favoured Yugoslavia and Greece and the terms were very strict. This, combined with the regional specifics (Balkan peninsula always was a powderkeg of sorts), planted a part of the seeds, that would eventually grow into the most destructive conflict in human history.

At first, the treaties were kept, but the situation changed in early 30′s, as clouds started to gather over Europe once again. The dawn of the nazi regime in Germany, Hungarian slow re-arming and Romania’s attempts to revisit the Trianon system did influence the Bulgarian armed forces also and from that point, active effort was conducted to “catch up” with the world trends. And the “flavour of the year” in early 30′s was the tankette.

Those tankettes were only lightweight vehicles however, armed with machineguns and by no means proper tanks. Bulgarian army requested something a bit heavier – and in 1937, Buglaria managed to purchase 8 Vickers Type E Mod.B tanks in Britain. These were armed with 47mm Vickers guns – and finally brought some firepower.

However, tanks are just the beginning. No fighting force could be effective without logistics and support. As the other armies of the region at that time, Bulgarian army was largely relying on horses, which was by no means sufficient. Therefore, in order to improve the logistics situation (at least in some units, including the armored ones), Buglaria also ordered 100 additional Opel trucks from Germany and 50 Italian Pavesi artillery tractors. Thus, by 1938, the Bulgarian army 338 trucks, 100 special vehicles, 160 ambulance vehicles, 50 tractors and 22 tanks. All the tracks and special vehicles were allocated to infantry and artillery units, while the tanks were split into two companies, called First (Second) company with armored vehicles.

In addition to improving the general arms situation, Bulgarian army did attept to improve their armored vehicles further. For mostly political, but also historical reasons, Bulgarians did turn to Germany for help with that undertaking. Of course, the Germans were happy to help – for two reasons actually:

- first, the Germans counted on increasing their influence on Bulgarian leadership (a gamble which later failed, but we’ll get to that)
- second, the Germans didn’t have to give out “their” vehicles at all, for it was late 1938 already and the Wehrmacht had the whole stock of former Czechoslovak army to pick from.

The Buglarians were no strangers to Czechoslovak tech. The first time they actually showed interest in it was as early as 1928, when they tried (unsuccessfully) to purchase the PA-II armored cars. They showed interest again in 1936 (this time to buy tanks), but at that time Czechoslovakia decided to tread carefully and to keep the WW1 treaties, not allowing Bulgarians to have their own armored forces. In 1937, the Czechoslovak army command agreed to sell only the Š-I, Š-I-D and Praga Ah-IV tankettes, but the LT-35, which the Bulgarians liked the most, was not cleared for export. Same thing happened a year later with the LTH tanks, produced for Switzerland.

But at that point the times changed already. As one of the last acts of still “free” (but maimed) Czechoslovakia, in February 1939, a number of light tanks (including the LT-35) were shown to the Buglarian delegation. Bulgarians at that point considered buying 50 Š-I (the infamous Vzor 33) tankettes and 40 LT-35 tanks. In March 1939, Czechoslovakia was occupied and it was now the Germans, who called the shots. This delayed the Bulgarian purchases significantly.

In June 1939, Bulgarian general Rusi Rusev negotiated the sale of former Czechoslovak tanks in Berlin, arguing that Bulgaria was threatened by Turkey in the south, asking for at least 26 armored vehicles. A month later, Bulgarian prime minister Georgi Kyoseivanov demanded 30 to 40 tanks already. After some negotiations, Hitler decided on 22.7.1939 to allow “friendly” countries to purchase German-owned armor. Details were hammered out in August 1939 and the Germans agreed to transfer 26 LT-35 tanks (at that point, called Panzerkampfwagen L.T.M.35 – a direct translation of the Czech name) from the elite 11th Panzer regiment in Paderborn. These were first transferred to Pilsen for checkup, however the repairs on German vehicles, damaged in Poland, slowed that process significantly and the first 21 LT-35 tanks arrived in Sofia only in February 1940, the other 5 in April. 13 of these vehicles were renamed to “Lek Tank Škoda Š-35” (“Light tank Škoda Š-35L) and then transferred to (or rather forming) the 3rd Armored Company (under the command of captain Bosilkov). All three companies were formed into an Armored batallion (Bronirana druzhina), commanded from Sofia.

However, by March 1940, Bulgarians started demanding even more vehicles, specifically 40 more LT-35′s. Needless to say, the Germans were not happy (they were building their own forces for the assault on Russia) and Škoda Pilsen thus had none to spare. Instead, they offered the Bulgarians 10 pieces of the T-11 tank. 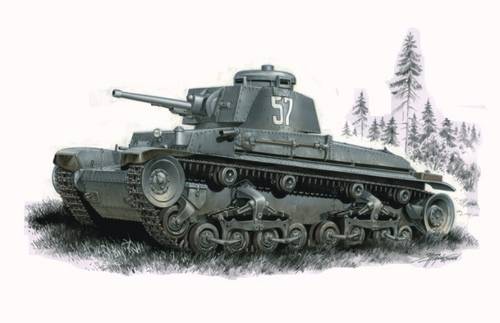 Škoda T-11 was based on the famous LT-35 (or Panzer 35t, as it is known in World of Tanks) light tank. What happened was that after this vehicle was accepted for service in Czechoslovak army between 1935 and 1936, a number of bugs and flaws (mostly of maintenance procedure character) was discovered on these vehicles. A lot of them were “fixed” in the field by the crewmen, but the vehicle was still judged as complicated to repair and fragile. These flaws showed especially when the vehicle was operated in winter, requiring often the moving of the entire tank away from the unit to army repair centers, or even to the factory.

Needless to say, the army was not happy about that and when Škoda took part in 1937 comparative tank trials for the new cavalry tank with the improved Š-IIa (LT-35), they failed miserably. Škoda reacted on the failure with a reconstructed version of the LT-35, the development of which started in November 1938. The new tank was based on the LT-35 hull, but had a bigger 140hp engine and improved transmission, increasing its maximum speed to 40km/h. Further improvements included a more powerful gun, the 37mm Škoda A7. The prototype was designated LT vzor 40 at first, but after the occupation in 1939, the development of it was stopped (only to appear later, but that goes beyond this article).

Some improvements from it however were made on the basic LT-35 vehicle itself. This version caught the eye of a rather exotic customer: Afghanistan. A special version (designated Š-IIa-A) was made and in February 1939, Afghanistan signed a contract for 10 pieces of this tank. The vehicles were manufactured in 1939 under German supervision already – Germans had nothing against the deal and in February 1940, all the vehicles were ready. An Afghan committee officially accepted them in March 1940, but by that time, it was impossible to transport them to Afghanistan because of the war, and so Škoda was forced to look for a different customer. Along came Bulgaria, which was interested – a contract was signed on 20.6.1940 (or late May, sources differ), with all ten vehicles being delivered from September 1940 to early January 1941. Interestingly enough, BOTH the classic LT-35 and the T-11 were named Lek tank Škoda Š-35.

Compared to the serial LT-35, the T-11 tanks had some improvements, including improved transmission and German Telefunken radio – but the most important change was the new modern gun, the 37mm Škoda A8 cannon (vzor 1939). This gun used the same ammo as the earlier 37mm A3 (vzor 1934), but the recoil mechanism was completely reworked – the gun now had short recoil, semi-automatic breech and improved shell ejection system. A T-11 can instantly be recognized from the LT-35 by the missing hydraulic recoil cylinder above the gun. Armor and engine properties however remained pretty much the same as on the LT-35.

Back to Bulgaria – Bulgarian armor saw first “action” in South Dobrudja, a region annexed by Romania after WW1, in June 1940 (the region was later “awarded” to Bulgaria in September). 1st Company took part in the operation. Still in 1940, both companies were moved to the Koren polygon (near the city of Lyubimec) close to the border with Turkey and took part in training.

With Poland and France defeated and the war with Russia coming, Bulgaria decided finally to throw their lot in with the Germans. This decision was influenced by the fact that after the failure of Italians in Greece, Bulgaria was basically bullied by the threat of German invasion. The pre-war Bulgarian dreams of easily acquiring some land while not having to actually JOIN the Axis forces disappeared.

On 1st March of 1941, Bulgaria joined the Axis powers formally and on 2nd March, German 12th Army entered Bulgarian territory. After that, a series of military excercises was conducted between the Germans and the Bulgarian army, some with the presence of Bulgarian tsar Boris III.

At some point in 1941 (sources differ as to when), Germans also supplied the Bulgarian army with 40 French Renault R-35 light tanks. These were captured in June 1940 in France and – much to Bulgarian dismay – they were in very poor shape. Their combat value also was quite dubious and some of them were immediately transferred to training units.

4th Armored Company was formed from the rest. In the meanwhile, on 25.6.1941, all 4 companies (with 2 more added were united into Bulgaria’s first Armored Regiment (“Broniran Polk”). This regiment was situated in Sofia and consisted of 6 companies. The armored force of the regiment consisted of the Vickers tanks (still in service), the R-35′s and the LT-35′s, as well as 24 Opel Blitz 3-ton trucks, 16 BMW and 2 Praga motorbikes. The regiment was commanded by general Genov. By 15.8.1941, the regiment had 3809 servicemen and its command staff undertook special training in Germany.

From 7.9.1941 to 21.9.1941, the regiment went to train near the town of Jambol. During this excercise, the Š-35 tanks proved to be reliable and to have good terrain passability despite heavy rain during the march from Nova Zagora – unlike the R-35, which broke down all over the place and was generally hated by its crews.

25 thoughts on “Bulgarian Armor – part I”