so it happened that Mao89 from EU server sent me a guest article about the Romanian TR-580 project a few days ago. At first, I was skeptical, because this project has two major flaws. First, it is “too new” (the vehicle was designed in 1974) and second, Mao89 proposed a massive frontal hull armor (200mm with an additional plate, with its angle it’s 300mm+, that would never work in WoT).

So, what I did was a bit of research myself. Obviously I can’t speak Romanian, so I will rely on Russian sources (which – when it comes to Soviet bloc tech – are quite accurate). This post is based on a combination of my own and Mao’s text. Most credit goes to him, I will only add some corrections. 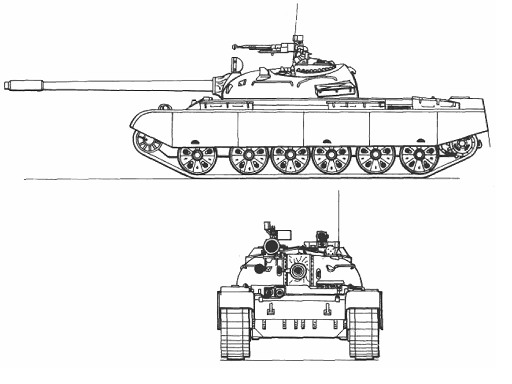 The TR-580 is a second generation MBT. This tank is a variant of the Soviet T-55 design and was built entirely in Romania. The Romanian army built almost 400 of these tanks, 140 of which were exported.

After the events of Prague Spring (Czech: Pražské jaro, Slovak: Pražská jar was a period of political liberalization in Czechoslovakia during the era of its domination by the Soviet Union after World War II. It began on 5 January 1968, when reformist Alexander Dubček was elected First Secretary of the Communist Party of Czechoslovakia, and continued until 21 August when the Soviet Union and all members of the Warsaw Pact, with the notable exception of Romania, invaded the country to halt the reforms), Romania adopted a new defense doctrine, fearing a possible incursion of the Warsaw Pact troops. On May 13, 1974, a program of building their own tank begins in Romania. The vehicle specifications demands were: Approximately 40 tons, 100 mm gun and an 800 hp engine.

The easiest way to produce it was by modifying the existing T-55 design. The license to build T-55 was not obtained from the Soviet Union, so the engineers had to figure out how to build it from scratch.

The 800 hp engine, similar to the Leopard 1 engine was not obtained either, so the Romanians used a “homemade” version of the old T-55 V12 engine with 580 hp, that was well known at that time.

The first prototype is ready in 1974, and in October, same year, it underwent trials. The trials lasted for 6 months and after several modifications, the second prototype was trialed. Overall, there were no less than 11 prototypes! Because of this, the serial production started in 1977.

The TR-580 used modified T-55 chassis with six roadwheels (unlike the original T-55 that had only five). Between the first and the second roadwheel, there was an empty space, that was similar to the T-54/55 Soviet vehicles. These modifications were made to allow for a bigger engine (the 800 hp one), that however never came.

The gun of this tank was the 100 mm A308. This gun was a variant of the A407 100mm anti-tank gun M1977. The A407 100mm anti-tank gun was the first artillery piece designed in Romania after World War II. The first variant of the gun, the M1975 (M stands for Model) had a semi-automatic horizontal sliding wedge type breech lock. The second variant, M1977, had a more practical vertical sliding wedge breech block. This gun used more types of projectiles, of which I will only mention three (because that’s the maximum we can have in game):

Silentstalker: I ran thru some sources and the gun seems to be roughly equal to the Soviet D-10. 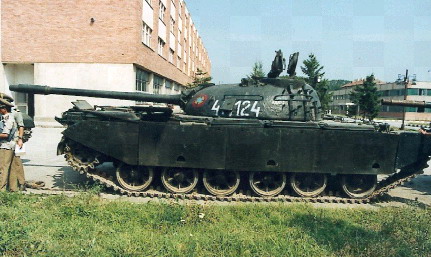 Some interesting facts from the production process:

- When Romania decided to build its own tank, the relations with Soviet Union and other Warsaw Pact “allies” were so cold no help from them on “how to build a tank” could be obtained. Therefore, Romanian government sent their engineers to another communist ally on a different continent: People’s Republic of China. China immediately saw the opportunity to tease the Soviets once again and happily provided all the help and expertise needed

- The biggest problem during the building process were the cast turrets. Their quality was low and first pieces were cracking. The technology of casting the turrets had to be switched and the metalic composition had to be upgraded as well. The end result was worth it: 320 mm of armor + 20 mm additional plates

- The gun had no bore evacuator, termal protection or laser telemetry

The TR-580 was produced from 1974 till 1985, when the 800 hp engine finally became available and the tank with it was redesigned TR-800. Then, after several substantial modifications, another redesignation took place (TR-85M1), but that is well beyond the scope of World of Tanks.

The TR-77 was the export variant with small modifications. It was exported mostly to Egypt in unknown quantities (later it was found out Egypt sold them further to Iraw). Some sources claim that Egypt bought 200 units, other sources say there were only 100. I’ll go with 140 because that’s generally considered to be the correct amount.

Silentstalker: Mao89 suggested the entire characteristics of the vehicle. As I mentioned before, I find them a bit controversial. The main problem is the frontal armor. The upgraded versions had massive 200mm frontal plate (100+100mm additional plate) and with the turret, it would be a monster. Of course, there are options. One would be to simply turn it into a heavy tank. Yes, that’s not historical, but if you have a look at the Soviet Object 430U, that’s a medium tank too, yet SerB wrote in the past that if it was ever in the game, it would probably be a heavy tank. This could be the same case. Still, the armor would be way too much even that.

Russian wikipedia shows radically different data on it and I have a lingering suspicion they are wrong, but obviously the additional frontal plate could be removed and the vehicle would turn into a T-55 hull-wise (100mm frontal plate), which would in turn make it much more viable. I am not sure however how much that would influence the weight (3 tons?).

Here’s where we have a bit of a hiccup. Sources radically differ on what armor the vehicle would have.

Without the additional frontal plate, I believe it’s:

All in all, it could be a great tier 10 tank, somewhat resembling the T-55, but of course with its additional twists and turns. Generally it would be slower, but the invulnerable turret would allow for some very interesting tactics.