While trying to keep the articles faithful to history some room for inaccuracy is allowed within these rules:

1) No tank or tank part will be 100% made up, at least a mention about tank role and vague specs are needed

2) Components not planned for the tank are allowed, provided it wouldn’t create grotesque inaccuracies like putting a gun that would obviously cripple a tank under its weight

3) This will be limited to WWII plans, anything post war risks to be too arbitrary to properly balance

No serious expectation of anything listed to appear in WOT as described is applied, but as we’re discussing about implementing history into an arcade game some items will be controversial.
This is unavoidable as WOT tech tree rules need a tank to be better than the previous one and ergonomics are not exactly cared about, meaning that most designs are over-performing their real counterparts.

After the recent general german tank rebalance made by WG which left some players rather disappointed, I think it’s a good time to look at historical developments and how they could fit in WOT.
As the Henschel line is slightly better researched this will be more of a rebalance and less of a revolution than the Porsche rebalance proposal, although again the focus will be on bringing better armor for tier, although I’m sure the proposed changes will stir controversy as they touch many community favourites.
The historical sources as usual are Spielberger, Jentz & Doyle with a few lines from Hahn.

Henschel heavy tank development can be traced back to January 1937, when Wa Pruef 6 asked Henschel to develop designs for a 30 ton tank armed with a 7,5cm cannon.
Although not the first development for an heavier design (Großtraktor and Neubaufahrzeug were produced in early 1930s but could be regarded more as parade tanks than battlefield ready designs), Henschel focused on the breakthrough tank role, with focus on all-around armor and guns intended to deal with machine gun nests and small fortifications rather than tank to tank combat, although the experience of France first and Russia later on radically changed this.

Seen by many players as a rather mediocre tier IV tank, D.W. II would greatly benefit from being brought down a tier.
Facing tier II-V enemies would mean having an armor nearly immune to auto-cannon fire and pretty effective versus most guns of the same tier with angling.
Removing the top 5cm, toning down HP and ROF would make the tank a pretty good defensive machine without becoming overkill.

A tank to be feared in its own tier, it would suffer against tank destroyers and 50mm aren’t anything special versus tiers above, let alone if facing tier V tanks.
All in all, it would be a slightly better AMX 38 with similar armor, slightly better guns and similar mobility.

Under-armored and over-gunned at tier V, let alone tier VI where it was placed earlier, VK 30.01 (H) would be a lot more balanced at tier IV.
Sporting the same armor as the previous tier, protection would be rather mediocre for an heavy tank and at roughly the same level as Panzer III, but this would be compensated by fairly good mobility (for an heavy tank) and either the 75mm L/43 or L/48 as top gun. Historically longer guns were considered but the required turret redesign basically meant the tank itself was discarded as becoming inadequate.

Most soft stats could be picked from the current tier IV DW (after all the two tanks were very close relatives) although the improved firepower would mean no preferential match-making.
Strong against the same tier but also only moderately well-protected, it would set the tune for the rest of the line.

Although pretty balanced as tier VI heavy, the VK 36.01 (H) is yet another over-gunned design as historically it was unable to carry the 88mm cannon.

At tier V it would bring great armor for its tier (on par with the feared KV), still excellent firepower as the current VK 30.01 (H) gun selection plus were its historical guns.
Mobility-wise we could expect similar performance as the KV tank (which isn’t too bad for an heavy) to which it would be an excellent counterpart, with less damaging guns but better penetration and better frontal armor but worse sides.

All in all, it would be a good breakthrough tank, able to take some punishment to the front but also punishing for reckless players as mediums of the same tier would easily exploit the weak sides. 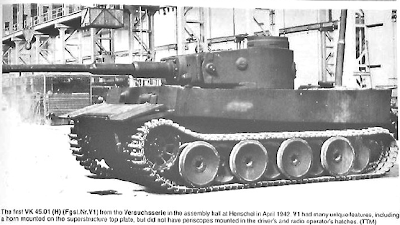 Great gun, good mobility but paper armor was pretty much the Tiger’s description.In recent patches this has been brought to the extremes, to the point that the tank resembles very little its historical counterpart except in looks.
Bringing down the tank to tier VI could give armor that lower tiers would find difficult to penetrate with a bit of angling, while HP and soft stats would suffer.

While keeping the current top gun would be somewhat historically accurate, I’m not sure it would be a good idea.
Being able to mount the long 88 means sacrificing a lot in other places, leading to a play style not unlike the french ARL 44, which is not exactly regarded as a great tank, although personally I find it adequate.
As alternative, Rheinmetall’s improved 88mm L/56 prototype could also be brought to play, giving +10/15mm penetration over the standard short 88 and allowing decent soft stats so that brawling as top tier wouldn’t be a suicidal option.

After tier VI, two options are available, one following closely battlefield specs, with another being closer to the current WOT.
Let’s review them both, starting with the more extreme variant: 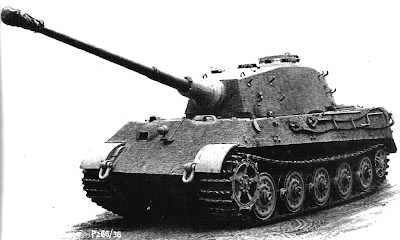 While Tiger II is currently regarded as well balanced at tier VIII, it doesn’t mean it couldn’t work one tier down.
Lower front plate is now weaker than it used to be and engine power toned down, so that the tank works best in a partial hull-down position and on flat terrain.
At the same time, what we have in game is Krupp’s Tiger II rejected proposal, adding yet again a gun that would barely fit and that would have had an horrid reload time historically.

Using the 88mm L/71 as top gun and reducing mobility (Tiger II never was an agile beast anyway) with a somewhat lower DPM we could have a tier VII with great armor and gun, able to troll lower tiers and stand up to quite a bit of punishment although lacking the agility to be a true brawler.

As strange as it may seem, we have no data on planned armor thickness for E-50 and E-75 other than one had stronger armor than the other.
This, connected to the fact the design was never planned to use anything larger than the 10.5cm L/68, would make the tank rather underpowered at tier IX but very possible to be balanced at tier VIII.

The main complaint in WOT would be that the tank is too well protected for tier VIII, and it would be true keeping the current armor. At the same time, that layout is not very realistic for a 75 ton tank.

IMHO armor would have been only marginally better than Tiger II (I’d say 150mm UFP, 120mm LFP, 100mm sides) and most weight would have gone into a larger turret, able to properly house the 10.5cm L/68 and a 2nd loader. A 5 tons margin is not that much considering this factor, even with the promised lighter suspension and optimized layout within the E-series.

The mighty E-100 was born initially as a Krupp project for a cheaper Maus using production components from the Tiger and Tiger II.
The first draft called for a prototype using an early Maus turret design and either a MB HL230 design or an optimized version boosted to 1000HP using high octane fuel.

Luckily we also have the turret design available:

Trouble is that it was quite a bit heavier than E-100 turret, pushing the total weight nearly 150 tons.
Even with a 1000HP engine we can expect Maus-like mobility but great armor and good firepower at tier IX.

This concludes the “radical” variant.
The other option involves leaving alone tier VIII and IX, while introducing a new tank at tier VII.

The “demi Tiger II” was initally called Tiger II in itself, while the production Tiger II was the “Tiger III” project.
The initial plans for an improved Tiger called for a sloped armor version of VK 45.01 using essentially the same components and the 88mm L/71, with a frontal armor rated either 100 or 120mm and 80mm sides.

The project in itself was rather short lived as it was ultimately decided to uniform production as much as possible with Panther components, leading to the “Tiger III” project which ended up in the Tiger B we all know.

Performance wise we could expect a tank slightly lighter than a Tiger II using the same engines as Tiger I, so not stellar mobility, balanced by slightly better frontal armor (imagine ARL44 hull with Tiger turret) and the Porsche Tiger II turret as top.

No introduction is really needed, E-100 is unlikely to change much.
Possible buffs are covered in the “Buff my tank! – E-100″ article.

I’m sure this article will raise controversy but given the constant WOT rebalancing I wouldn’t consider it completely impossible.

Hope you enjoyed reading this article and I will see you in the next one!