Hello and welcome to “Buff my tank!”

The “Buff my tank!” articles are meant as an historical way to look at some tanks considered underpowered in game and ways to improve their combat abilities discussed by the original german engineers.
Beware that while being sometimes ironic in tone, the article treats about both costs and benefits of every choice and it most likely will never be listened by WG as suggestion.

A true workhorse of the Wehrmacht, the Panzer II was initially conceived as an interim design until the heavier and more capable Panzer III and IV were ready but its development was still very long, with plenty of proposed upgrades.
To properly explore this, we will draw our information from Spielberger’s “Panzers I and II and their variants” and “Gepard”, while also using ” Panzer Tacts 20-1” and “Panzer Tracts 20-2” from Jentz & Doyle.

First series: ausf A to G

A design for a 10 ton class vehicle was requested and in 1935 the first prototypes were shown, with the 7.6 ton MAN design winning the competition.

The initial model carried a 2cm KWK 30 and a MG 34, good enough versus similar light tanks but quite lacking against anything heavier.
Some tanks were upgraded later on to the slightly better 2cm KWK 38, while an ausf F “Flamingo” variant was equipped with a flame thrower.

The initial design called for all-around 14.5mm armor, useful against MG fire but pretty vulnerable against everything else.
Ausf C brought frontal protection to a decent 30mm, enough to stop similar auto-cannons from distance and some AT rifles, although still pretty light protection in tank terms.

Later versions added bolt-on plates of 14.5 to 20mm tickness frontally, while ausf F used solid plates of 30mm for turret front, 20-35mm for hull front and 20mm sides, increasing vehicle weight to 9.5 tons.
In 1941 Hitler proposed to give Panzer II spaced armor plates, in a similar layout to ausf F, with extra plates varying from 14.5 to 20mm thickness, although at likely quite a price in mobility.

The initial Maybach HL  57 TR engine was rated 130 HP, giving a pretty respectable power to weight ratio of around 17 HP/ton and a top speed of 40 KM/H.
Ausf B introduced the Maybach HL 62 TR rated at 140 HP, not a big upgrade but much needed for later versions as the ausf C brought the weight up to 8.9 tons.

Between 1938 and 1941 a new 10 ton class panzer with increased speed and protection was planned, with an initial design of a 10.5 ton Panzer II with a new engine and armor layout, called VK 901 or Panzer II Neuer Art.

Initially the standard 2cm KWK 38 and MG 34 design was kept, although by then it was clear it was insufficient against armor.
In 1941 it was proposed to mount the Czech 4.7cm cannon in a Panzer II turret but the project wasn’t pursued.
Later series of the VK 13.01 Luchs mounted a 5cm L/60 in an open-top turret, produced until 1943: 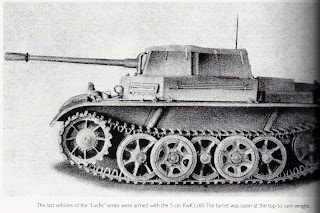 A third turret was also developed by Daimler-Benz, posing the basis for later designs:

The first chassis was finished with a 145 HP Maybach HL 45 engine for a top speed of 50 km/h, but soon a new 180P Maybach HL 66P engine was designed to propel the vehicle up to a quite fast 65 km/husing new suspensions derived from the Panzer 38(t).

In 1941MIAG received a contract to develop along with MAN the VK 1602 design, also called the Leopard, while Daimler-Benz designed the turret.
It was designed into a 21 ton light variant and a 26 ton heavy one and planned to be developed into an entire design family (wooden mock-ups of a Leopard Waffentrager existed), but ultimately canceled by Speer himself in favor a recon variant of the Panther tank. 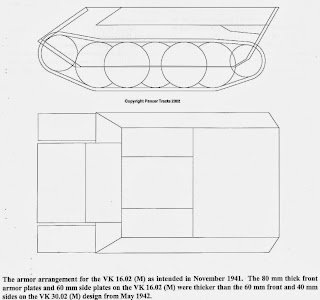 In 1943 a new heavy reconnaissance tank was proposed under the VK28.01designation.
It was planned to be a multi-purpose tank with an air-cooled rear engines, with Daimler-Benz in charge of the project.
Several drafts were made to accommodate different engines, until the project was cancelled in May 1944 in favor of a design using Panzer III components.

Just like VK 16.02 it was designed into a lighter 28 ton design and an heavier 33 ton variant, although no differences are stated aside from engine power.

The only planned gun for the tank was the 75mm L/48 in a turret derived from that of the Panzer IV ausf G, while an open top variant was proposed with a quadruple 20mm FLAK 38 mount or with a similar armament as the Leopard.

The armor scheme was generally in line with that of the Leopard, again using 50mm sloped frontal armor and 30mm sides plus planned use of side skirts against AT rifles.

Initially the tank was planned to have a newly designed525HP Diesel engine, but since it didn’t go further an alternative 450 HP DB 819 engine was planned.
A final choice was made into the Argus 12LD330H 550 HP engine, reaching 19 HP/ton.

The heavier variant was born out of the need of a larger engine, due to the fact that the MB 819 ended up giving reliably only 400 HP, thus the larger MB 507 rated at around 600 HP was proposed.
The changes brought the weight up to 33 tons, for which at this point the 700 HP Maybach HL 230 was proposed.

Most variants are already present in WOT, some components might be brought to fine-tune the grind.
Some possibility of having stronger firepower is present but the cost would be invariably an open turret and likely some mobility.