the following post deals with the history and possible implementation (viability) of the Hungarian Nimród tank destroyer in detail. It was written by Károly “Karika” Németh and after seeing it, I specifically asked for his permission to publish it on For the Record – the reason for that is that I haven’t seen the info on 80mm Nimród project anywhere else on the web (at least in English) and it might be new to many of you, dear readers. 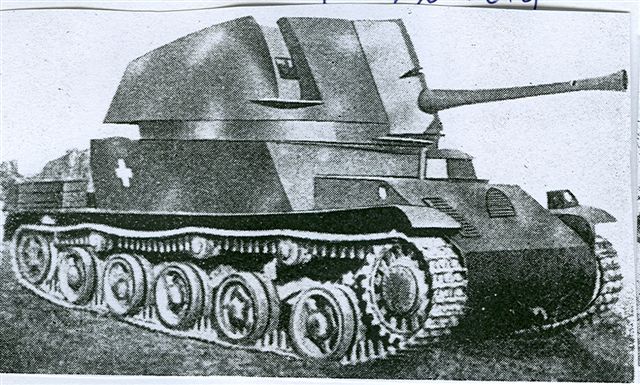 One yeat after the first L-60 light tank were purchased, in 1937 the Swedish Landsverk factory presented the L-62 anti-tank and anti-air self-propelled machingun to the Hungarian Army. The HM (Hungarian Ministry of Defense) was interested, and ordered a prototype. After the first trials in Sweden, in 1939, and the hungarian MÁVAG factory bought a prototype and the production rights.
The main reason why the hungarians bought the L-62 was that their military leaders thought that the freshly equipped troops could use some fast, all-terrain, mechanized anti-air support (and anti-tank support in the conditions of the late 1930’s) vehicle, and its 40mm Bofors gun was already manufactured in Hungary and and resembled in many ways to the already bought L-60/Toldi. 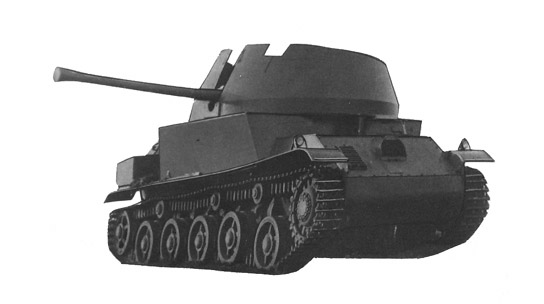 After the long trials, the hungarian experts suggested some additional changes to the L-62 before it could be used in hungarian service:

- a plus crew member, to organize the fire control
- because of this additional crew member, it was needed to enlarge the turret, so the so far round turret has been stretched backwards,
- and to protect the operating personel, the frontal armor of the turret has been made higher
- install a metal grid on the engine cover
- an additional submachinegun against the infantry
- and some minor ergonomical, practical changes were made too.

After these changes has been made, in 1940 the HM ordered the first 46 vehicles of the 40M. Nimród páncélvadász és légvédelmi gépágyú (=Nimród tank destroyer and anti-air machinegun) from MÁVAG. The second series of the Nimróds (89) were ordered in 1941 with the licenced-hungarian Ganz VIII. VGT 107 type engines. The first Nimróds were finished in October 1941, but the production was slow, because the Turán medium tanks had the main priority.

Nimrod on the eastern front: 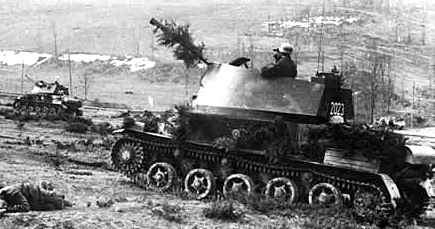 At first, the Nimróds were used in tank destroyer role too with variable success, they were quite effective against non- or lightly armoured vehicles, armoured cars or light tanks. But after the battles on the eastern front in 1941-42 it became clear, that the Nimród’s firepower is insufficient against the heavier soviet AFVs, such as the T-34 or KV-1 and KV-2. Even its tall silhouette make it very easy to spot. After 1942 the remaining Nimróds were renamed to 40mm 36/40 M Nimród páncélos gépágyú (= armoured machinegun), they were transfered from the Armoured Corps. to the Anti-Air Battalion. After that, the Nimróds were only used as a mobile anti-air vehicle and rarely fought against ground forces. 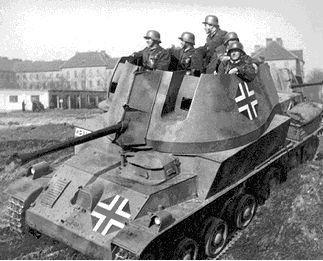 In World of Tanks (a quite unique vehicle)

The Nimród is a rather odd vehicle, but in World of Tanks it will be something like the Tier V german tank destroyer Pz. Sfl. IVc, a tier lower, in Tier IV.

It has no armor, even a little less than the Tier III Toldi light tank. It has large silhouette, plenty of crew members, good mobility, and designed for anti-air role. The main difference will be its gun, the Nimród won’t get a high tier gun with relatively high alpha damage, its 40mm 36. M Bofors is on the other side, low damage with very high rate of fire in a rotating turret. It could be balanced with high accuracy (as an AA gun, it was good enough). Unfortunately I don’t think there are any other historical options for the gun (or anything other), only if the original Bofors gun or its L/70 version could be mounted. 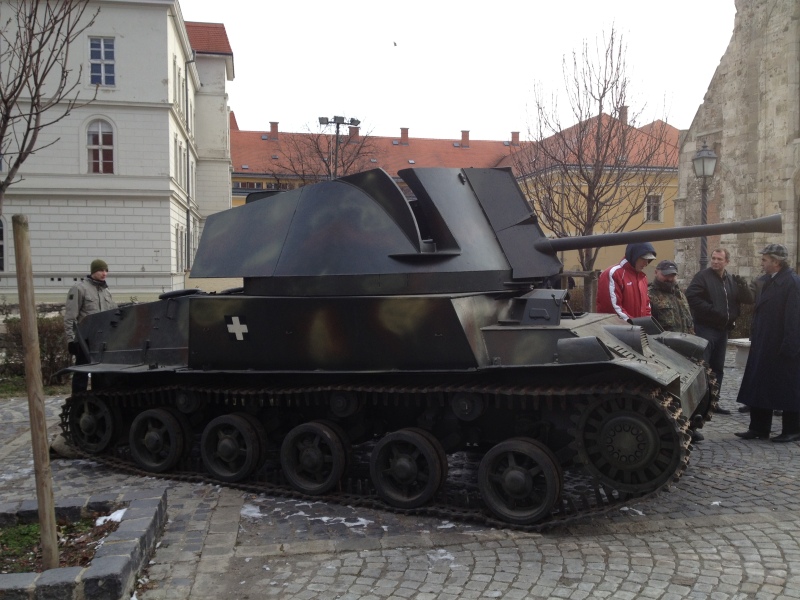 First of all, not much known about this project, because most of its documentation were lost during the war. No (known) pictures/plans can be found about it, because no vehicle were produced, and all of the plans are missing. The only historically accurate drawns were made by Attila Bonhardt(?), hungarian historian, but that only represent the size of the planned 80mm gun compared to the Nimród and its original 40mm Bofors gun. Nothing known about the exterior of this TD yet.
Secondly: there were no official name for this project, in the hungarian history books it can be found as „Szebeny-féle kísérleti harckocsivadász” (after the main constructor’s name) which literally means „Szebeny made experimental tank destroyer”. Sometimes its also referred as Nimród 80 or Nimród 80mm.

Szebeny’s TD, this picture represent the size of the 80mm gun, planned to mount on the Nimród’s chassis

I’ll translate here everything, that known about it right now:

In 1940 a hungarian engineer named György Szebeny (pronounce: /sɛbɛni/) submitted an early plan to the HM about creating a „moving fortress” with an 8 cm cannon and thicker armor than the Toldi series. However, this plan was rejected by the HTI, because according to the experts, the difficulty and cost of production was not proportionate to the combat value of the vehicle. It was way too heavy, and 5-6 times more expensive than a regular AFV (e.g. a Toldi tank or a Csaba armoured car).

Despite this, Károly Bartha, the Hungarian Minister of Defence ordered lieutenant-colonel Károly Bézler to evaluate the possibility of creating a tank destroyer with 8 cm cannon (eighter the 29.M 80mm AA gun, or the 18.M 80mm field gun) on a Nimród chassis, further thinking Sebeny’s plan.
In September, 1940 Bézler stated in his report, that the muzzle velocity and the recoil of the AA gun is too high to mount on that chassis, and the only viable option could be the field gun. He also stated that it has to go without a fully rotating turet, the maximal lateral deviation will be 15-15°. This whole process would cost 33 000-44 000 pengő (hungarian currency). Even though the experts still said that this plan is too expensive and impractical, Bartha has commissioned Sebeny to create a semi-automatic loading mechanism (a similar pattern of the AA gun) to the 18.M field gun, and a plan to mount it on the chassis of the Nimród.
According to Bartha’s orders this TD would have to deal with more than 50mm armor and only planned to used against ground forces. In this order this TD still wouldn’t have rotating turret, only 30-30° horizontal and -10° +30° vertical deflection, but for the more protection of the crew, it would have armoured roof (unlike the Nimród).

In April 1941, on a meeting with the experts of the HTI, Szebeny presented the plans of the new cannon and its carrier:

The experts complained (again..) about the increasing costs of the modifications (~100 000 pengő); the too high gravity center; and the increasing weight of the supersturcture and armament, because the original carrying capacity of the Toldi’s suspension (8 t) was already overloaded with the Nimród (11 t), and the planned vehicle would have been weighted 13-14 t. So the military leaderboard rejected the plan (again..).

But Bartha isisted to continue the project, so he gave free hand and 45 000 pengő to Szebeny to carry-on. In November 1941, Szebeny finished, and he made the vehicle capable to fight against air forces with +100° gun elevation (even though no one asked him to do it..). After the comperative tests between the new 80mm gun and the Turán’s 75mm gun, the Hadiműszaki Tanács (Military Technical Board) rejected the plan (again…) because:

- the same reasons as before, plus:
- the new gun only meets the minimum requirements,
- the modification of the new gun and to mount it on a Nimród would have cost 276 500 pengő,
- there are no room inside the tank to mount the anti-air sighting devices,
- the new gun’s muzzle velocity (580 m/s) is not high enough against air forces,
- because of the enclosed superstructure, the anti-air monitoring would be bad,
- because of the steering-gear system of the Toldi and the Nimród, the planned vehicle could not turn „on its heels”, or in one place. Without the rotating turret, it would make the fight against aerial targets very difficult,
- the first, mass produced series of vehicle would only been produced by the end of 1944.

After that, in February 1942, defence minister Károly Bartha cancelled the project.

In World of Tanks (a mysterious vehicle)

Not much known about this tank destroyer’s exterior, so the artists of Wargaming would have plenty of work to came up something usefull for this vehicle. But I think that won’t be a problem, just look at the american TD line, especially the T28 Prototype or the german E-100’s TD and SPG variants. As I’ve read the sources I imagined its supestructure something box shaped, like the SU-85’s or the ISU-152’s superstructure, maybe not that sloped, but it’s just me.

If it will be implemented to the game, I picture it as a Tier V tank destroyer, or maybe a Tier IV or V premium TD (depending on the fate of the two Zrínyi TDs). It could be a Nimród on steroids: gun with relatively high ROF (and probably two times higher alpha damage than the Nimród), weak armour, just like its predecessor, but it’ll be much slower, thanks to its increased weight with the same engine.
It was just a project, so on one hand it doesn’t have many historical modules, but on the other hand, it could get many slightly unhistorical ones instead (a stronger engine, a more powerful gun, etc.), like what would have been implemented if the project were finished…