Russian server had this nice article about the Super Pershing tank and its development by a Russian historian Andrey Upanov. Thought it might be a good idea to actually translate it. By the way, the article is partially based on Belton Cooper’s Death Traps, an infamous book, responsible for several of the nastiest American tank myths (“Shermans burned all the time”, “You needed 5 Shermans to kill one Panther”, “Sherman was a really bad tank” and others), so… I hope the author took this into account.

In December 1942, the Americans, who fought the Afrika Korps in Tunisia, first encountered the new German armored “beast” by the name of Tiger. After examining the holes that the 88mm gun of the German tank left in the Shermans and Stuarts and finding out about the practical effectiveness of such a gun, the Americans requested their command to give them a vehicle with similiar characteristics.

Ever since 1942, the American tank designers worked on a line of prospective medium tanks T20, T22 and T23 with a 76mm gun. When they learned about the new German Tigers and Panthers, the designers increased the caliber of the gun and in the beginning of 1944, they released the new tank T26 with a 90mm gun and 102mm thick frontal armor for testing.

Even as the T26 development continued, people in the American command structure argued, whether the US Army actually needs such a tank. Some generals, including the outstanding George Patton considered it pointlessly powerful. Their opinion was that tanks do not fight other tanks, that is the task of anti-tank guns and self-propelled guns and in order to fight the lightly armored targets and infantry, the 75mm gun of the Sherman medium tank is sufficient. On the other hand, other high ranking officers, such as general Jacob Devers, believed that the creation of a tank with a powerful gun and thick armor is an important and urgent matter.

The arguing about the T26 continued until the 6.6.1944 European D-Day invasion. And here it turned out that the “good old Sherman” is insufficient against the Tigers, Panthers and German AT guns. The work on the T26 tank had to be accelerated. In February 1945, the tank was accepted in service, it was named M26 Pershing and in the same month, first pieces of this vehicle were shipped to Europe.

However, the M26, even though it surprassed the Sherman in most characteristics, still did not reach the power of the German tanks. It was needed to create a heavy tank and even in the USA with their vast industrial potential it was not possible to do that quickly. As a compromise, it was decided to upgun the M26 by installing a more powerful 90mm cannon. After the trials at Aberdeen proving grounds, this tank was shipped to Europe and attached to the 3rd Armored Division.

In the beginning of 1945, major Harrington, the chief of the tank repair service of the 3rd Armored Division, summoned one of his subordinates – lieutenant Belton Cooper, telling him that he is the only person for such a project and to show him what he can do.

(SS: there was a direct quote of Belton Cooper from Death Traps, translated into Russian – it would be stupid to translate it back to English and I don’t have the book, so I will transfer the direct speech into indirect by keeping the meaning).

Harrington definitely did not want to lose the new M26 in first battles. He ordered Lt.Cooper to somehow improve the armor of the tank. The favourite American solution to hang whatever they could get their hands on on the frontal armor and when meeting a Panther and Tiger, to pretend that it’s just a bunch of sandbags didn’t work in this case: the gun was simply too telling. And so Lt. Cooper had to do something else.

He recounts that in the well-stocked German repair shops, they found several huge plates of 38mm thick boiler steel and they decided to make the frontal hull armor as multi-layered. They did cut the two boiler plates into the V-shape, resembling the shape of the frontal armor. That’s how the tank was protected not by the basic 102mm cast armor, but also by two 38mm boiler plates with a gap between them. The Americans believed that despite the relative mildness of the boiler steel, the fact the armor is now multilayered and the angle of armor will force the German shells to ricochet.

The improved armor added cca 5 tons to the weight of the tank, which wasn’t predicted by the original design. The rugged American torsion bars and roadwheels groaned and squeaked, but they held.

Protective “helmet” for the tank

But that wasn’t all! In America, they love the sport clashes with a prolonged ball, which they call “football” for some reason. One of the rules of the game is to protect your head by wearing a helmet. However, there were no helmets available to put on a tank turret. On the other hand, the Americans found a damaged Panther along with the aforementioned workshop. Cooper in his book described the modernization of the M26 turret – they did cut out a piece of the 88mm thick frontal armor from the damaged German Panther and they did cut it to the size of 150 x 60 cm. In the center, they made a hole for the gun barrel and two smaller holes next to it for the aiming device and the coaxial machinegun. This plate was then attached to the gun barrel and welded close to the frontal turret armor.

Now, the M26 was well protected from the German shells in the frontal arc. It’s true that another problem arose: the mechanism, that was supposed to elevate and depress the gun barrel was not designed to move additional 650 kg of armor. As a result, only a memory remained of the elevation angle after installing this ad hoc spaced armor. The tank could drive and shoot, but only the ground in front of it.

Belton Cooper remembers how they fixed this issue as well by balancing the gun by cutting a pair of counterweights from the 38mm boiler plate. This was not sufficient, additional counterweight was needed, so they did cut more 30 x 60 cm plates from the boiler steel and kept attaching them to the rear of the counterweight with clamps. By using trial and error method, they thus managed to balance the gun.

As a result of these “fixes”, the weight of the vehicle was increased by 7 tons and the return wheels sunk 5 centimeters in comparison to the regular vehicle. It was obvious that the new vehicle wouldn’t have good dynamics. But at least the American tankers were happy that they finally recieved a tank with a powerful gun (even though it had a slow two-piece reloading process) and with good frontal protection.

In the 3rd Armored Division, they called the improved tank the “Super Pershing”. According to Belton Cooper, this tank fought twice. For the first time, it was in the beginning of 1945 in Germany between Weser and Nordheim. The tank destroyed an unidentified armored target with its gun. In the second battle, the Super Pershing allegedly destroyed a King Tiger by hitting its bottom and causing an ammo rack explosion.

Did you know that…

- M26 was developed by the Americans as a vehicle equal to the German King Tiger
- there was a plan to produce 1000 Super Pershings, but in the end only 25 were produced
- the vehicle recieved its official designation T26E4 in March 1945
- the thickness of the frontal armor without the additional spaced armor was 102mm, which was twice as much than the one of the Sherman, the most numerous tank of the Allies
- the 90mm T15E1 gun was so powerful that during the testing, its shell penetrated the German Jagdpanzer IV tank destroyer from the front, went right through it, penetrated the rear and exited the vehicle, ending in the ground 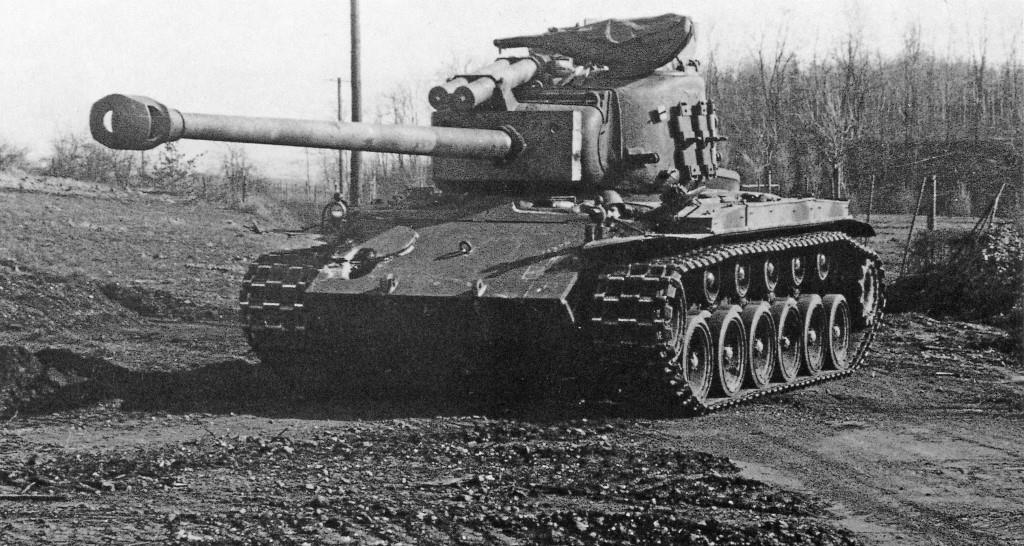 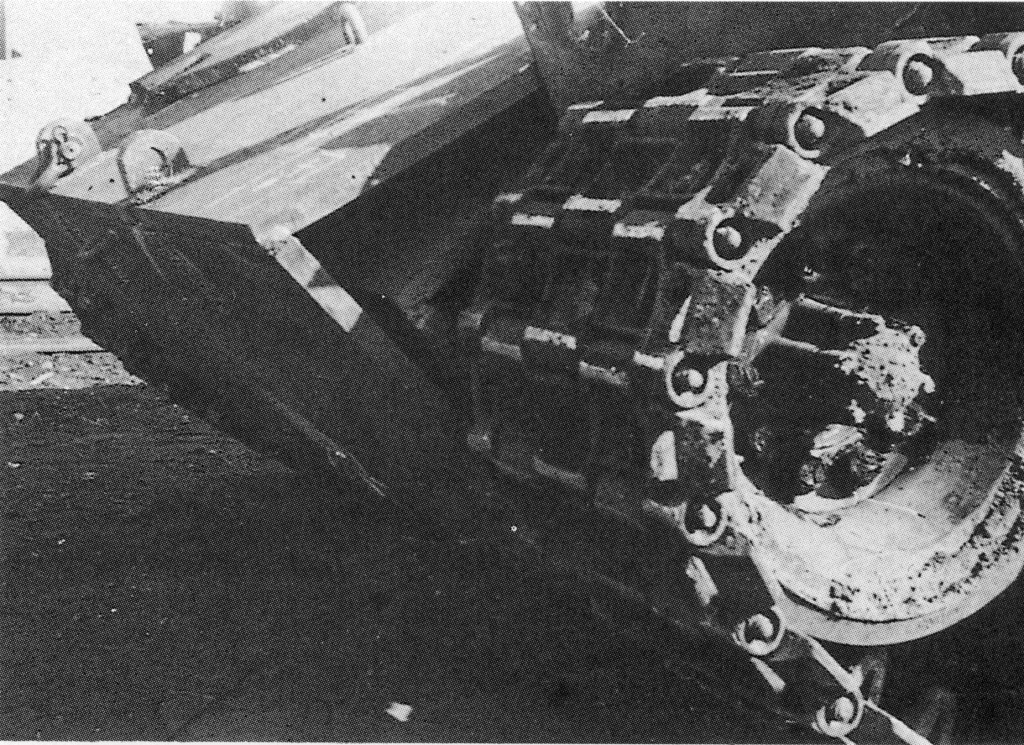 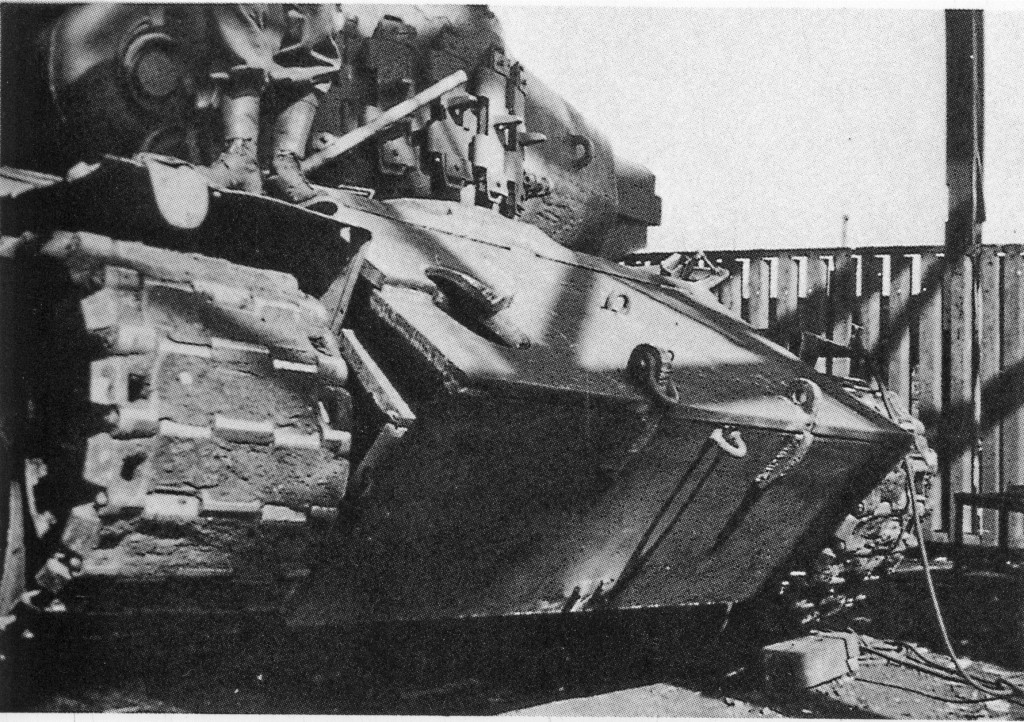 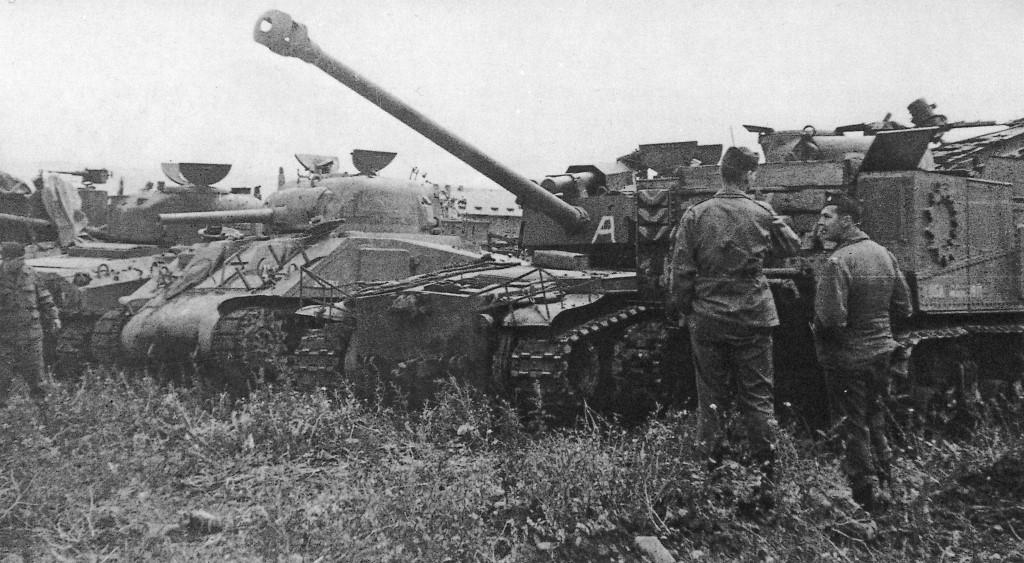 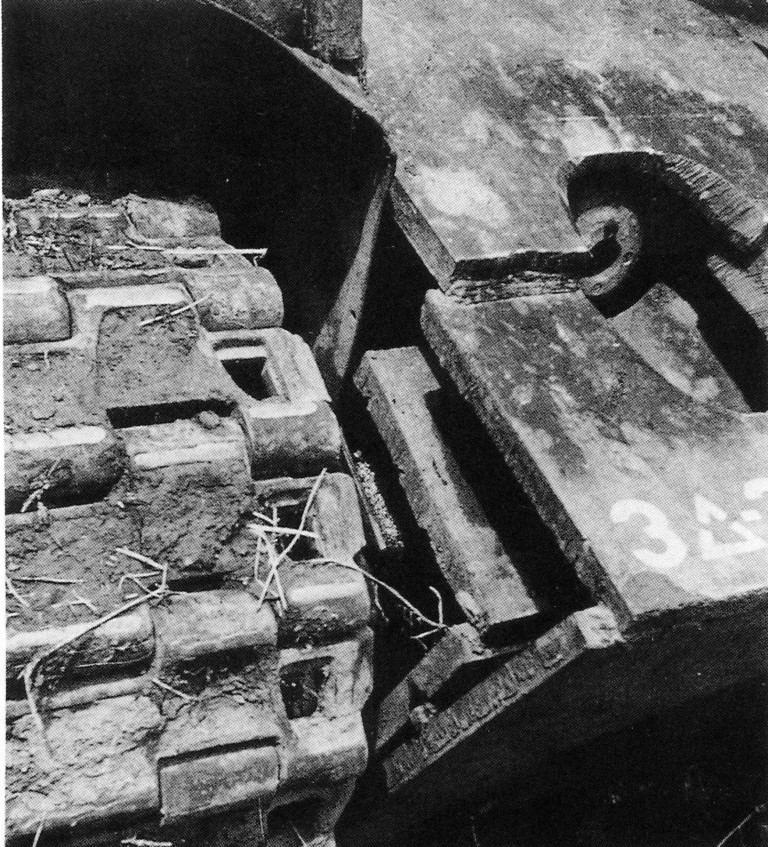 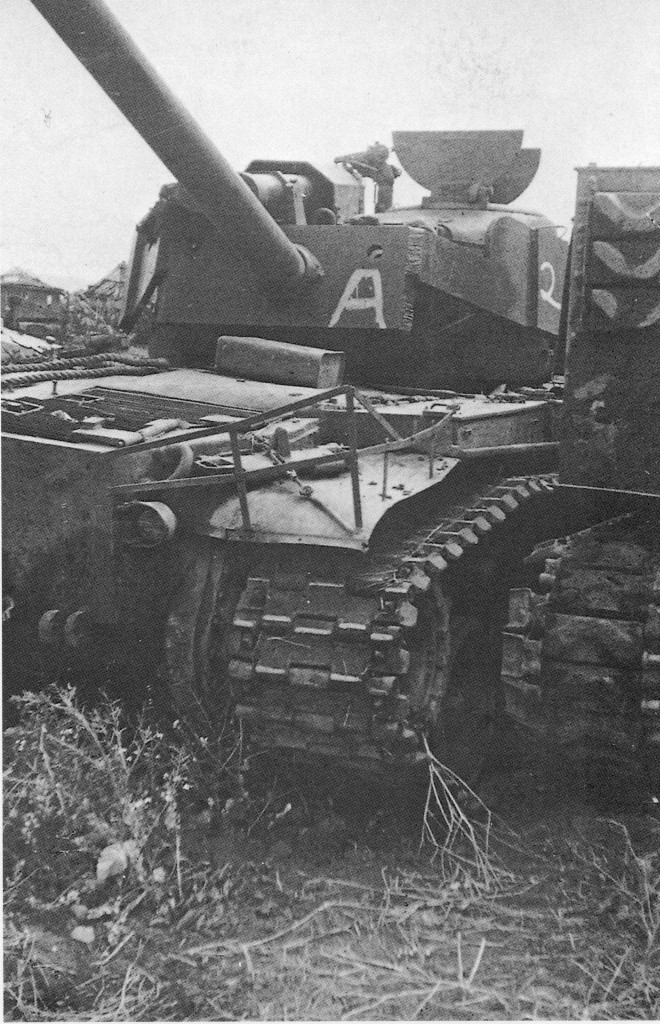 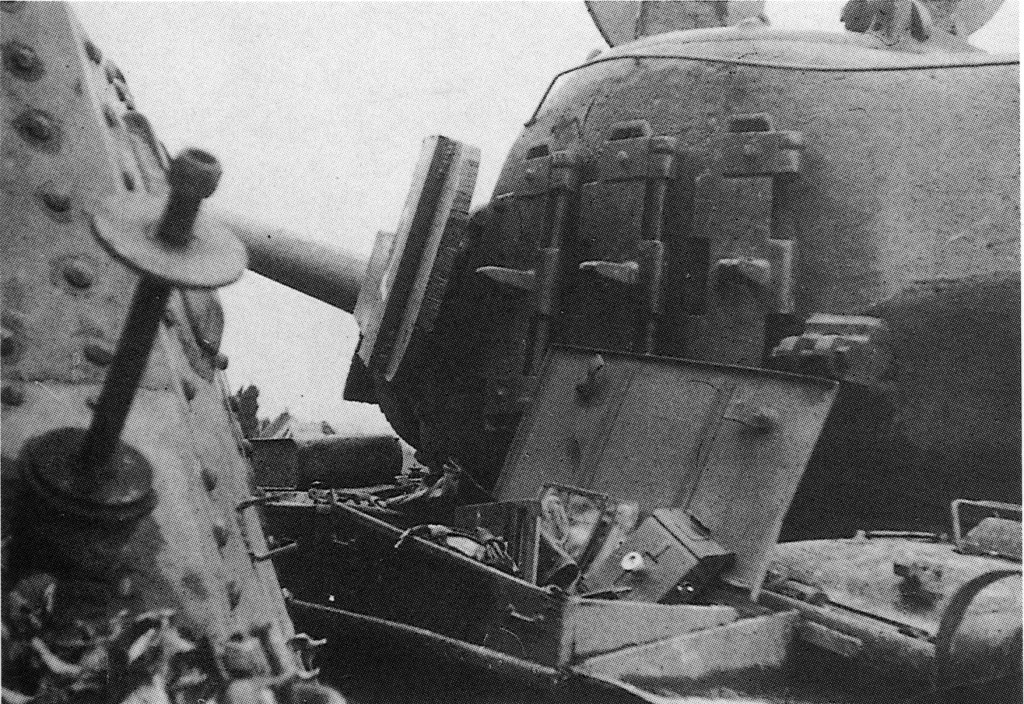 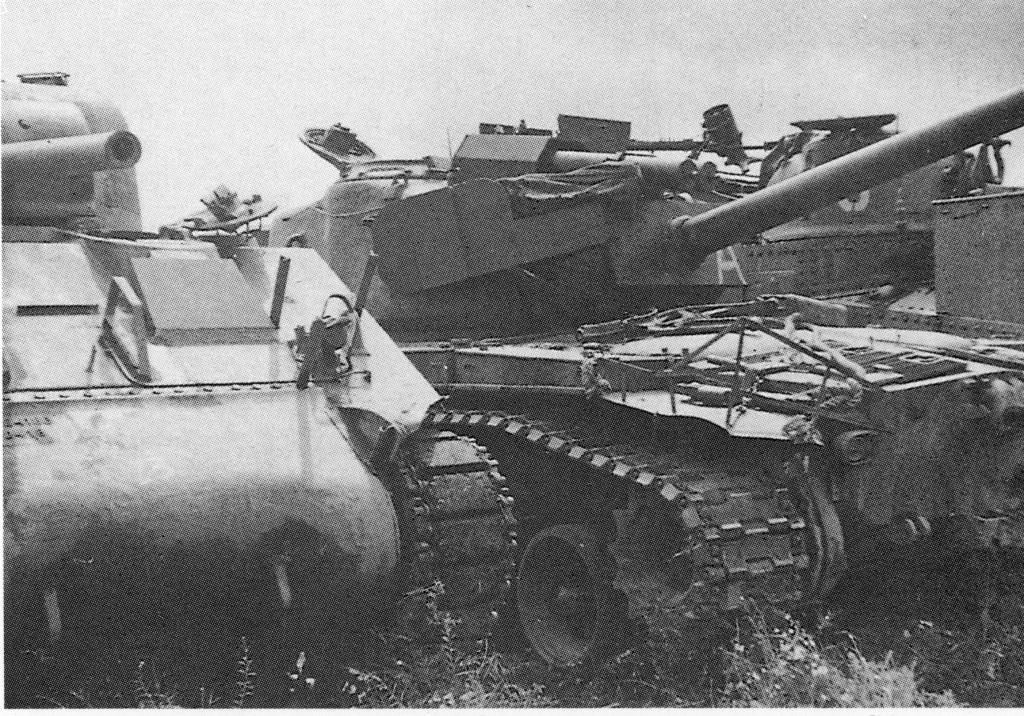