after a night’s sleep and a coffee, I decided to write a bit about my meeting with Yuri Pasholok and his colleagues (they are not publicly active, so I think giving out their names and positions would do them disservice) yesterday afternoon in Prague. Along with me were two of our historians, Jiří Tintěra and Vladimír Francev – both are well known in the Czech community, but V.Francev is a living legend, one of the few “old guard” historians left like H.Doyle for example.

The meeting was cordial and I had actually a lot of fun and learned some interesting things of how Wargaming operates – and of tanks, of course (like the WT E-100 replacement, but who knows when that’s going to happen). Despite our reputations, we did put aside our differences with Yuri Pasholok (who is actually a pretty okay guy in real life) to work on the Czechoslovak tree, specifically to start proper cooperation between the two gentlemen and Wargaming.

Now, before I jump to the Czechoslovak tree stuff (very interesting by itself), a little bit of Wargaming first. You see, I learned some things how Wargaming operates – and no, that’s not some stuff I want to publish, I have no reason to as the guys from WG were very honest and open. Some of the things made me laugh, some made me facepalm or shake my head in disbelief. But the biggest surprise was… Richard “Challenger” Cutland, or rather his activities. If half of what the WG RU guys said was true… that’s not even incompetence. That’s borderline sabotage. I really thought better of you, Richard. Oh well, I guess I shouldn’t be surprised. But – as fun as it is to throw dirt on WG EU, at this point, I won’t do it. It’s pointless, because knowing what’s going to happen with (to) WG EU… yes, very very amusing (well, to me, not to WG EU I am sure).

But we talked about other things too of course, like tanks. And more tanks. Specifically the Czechoslovak branch. It gets a bit convoluted here.

You see, J.Tintěra found a new tank in the archives… or, so we thought. I only saw the drawings AFTER the meeting (I got them on flash drive and didn’t have a laptop with me), so I couldn’t react. The matter is made more complicated by the fact I can’t just dump it here, it’s his find and his full right to publish them in any manner he sees fit. It’s completely possible that the vehicle will appear in a featured article on WG EU and WG RU portal, despite WG EU having (in best case) nothing to do with it, and (in worst case) sabotaging the Czechoslovak tree effort. Oh well.

Basically, the tank documents found belong to a tank called T 40 (do NOT mistake it with the T-40/75, which is a refitted Panzer IV). It’s one of the very early TVP series variants, of somewhat mediocre armor and average mobility, fitted with short 88mm gun (the one from Tiger I, or rather its equivalent). Apparently there are two versions (one with different suspension) and it’s a pretty solid tier 6 premium medium tank candidate, so that’s what’s going to happen apparently.

Now, it gets interesting. When I came home and opened the files, it immediately struck me that I saw this design before. Yes, Martin Dubánek wrote about it! It’s this (Dubánek’s reconstruction, compared to the drawing it looks a bit off, so just for illustration): 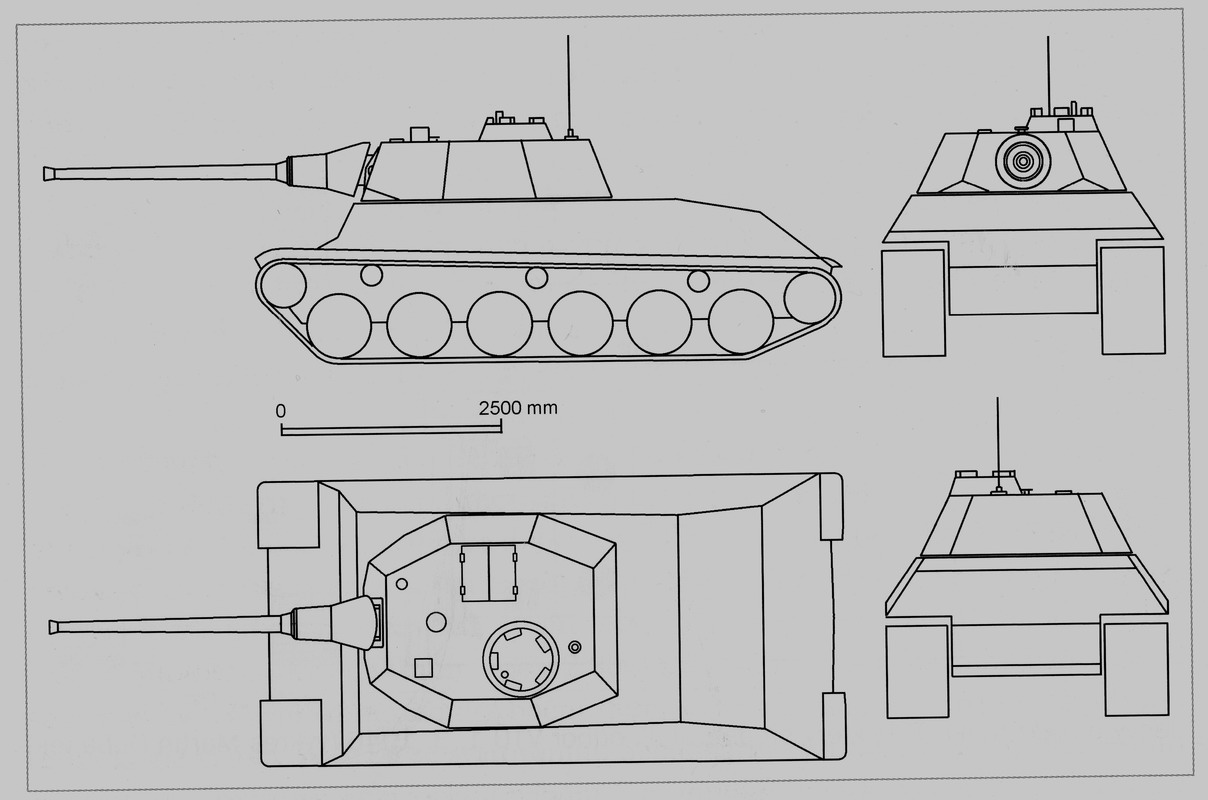 But Dubánek fucked it up. He never mentioned that the vehicle had one specific gun (or rather two, but they are practically identical) and that it was called T 40 (there were other details different as well, so consider what I wrote in the past based on Dubánek’s work invalid). It’s obviously a part of the TVP program, but previously, I called it T 50 (because that’s how later on the Škoda TVP proposal was designated). It was a reaction of Škoda to the VTU TVP concept proposal and it is actually worse than the VTU stuff. And so, my branch proposal changed from:

Well, it’s something. Plus, as a bonus, the TVP Concept original report comes with two slightly different hulls and two slightly different turrets. So that’s a plus as well. Of course, the old issue remains with the tier 9, but that’s okay, there’s a way around it: basically, with “Pejčoch’s TVP”, we know the dimensions of the hull and the turret can be used from the Concept (or even from T 40) with the T 50/51 as the top on, or the oversized T-17 turret… meh, getting too technical now, sorry.

I wish I could tell you all the details and the backstory, but as I wrote, that’s reserved to Mr.Tintěra. The main point however is, a major issue (whether Czechoslovakia can have an original premium tank) was settled I think. In the future, the research will actually continue – there are more files to be uncovered, more drawings to be scanned and more things to be done, either with me, or without me. Normally, this sort of contact would be the area where WG EU comes in, but after yesterday, there is no way in HELL anyone from there is coming near Czechoslovak tanks in the future.

So that was it. The rest were some various tidbits and chatter. I had actually a lot of fun and I do think it went well. Now… back to FTR.

60 thoughts on “Meeting Yuri Pasholok: of WG, Czechoslovak Tree and Other Stuff…”