since today in the 8.8 info it was uncovered that the new German tier 6 medium tank (to replace the VK3001H, which is blatantly unhistorical) will be the VK3002M, let’s have a look at it, shall we? 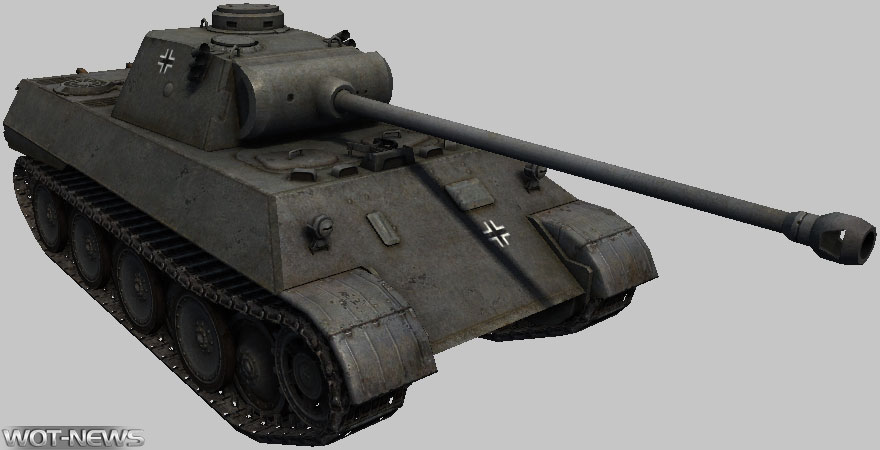 As you can see, VK3002M can be identified as a Panther at first glance. It’s a Panther prototype, that’s why. In game, it will most likely be designated as VK 30.02 (M) or something like that, but I will refer to it as VK3002M, it’s easier.

In November 1941, special Panzerkomission representatives met with Generaloberst Guderian to discuss the future of armored warfare in the East. If you’re wondering what a Panzerkomission is, it’s a committee consisting of members of the military industry (not soldiers, civillians), estabilished to discuss and propose tank ideas to the army. 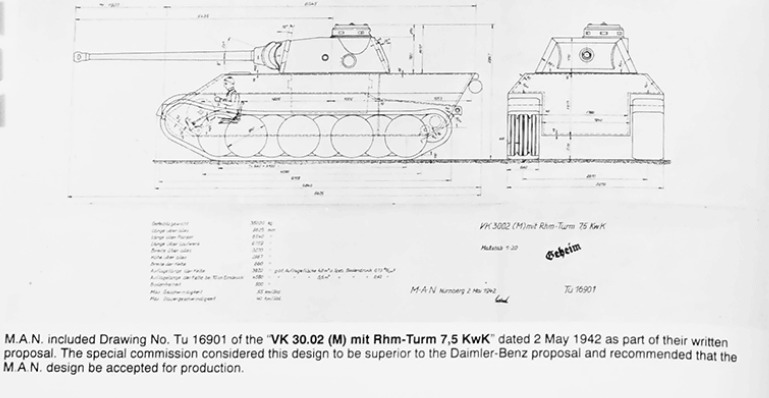 Guderian complained to them that the German tanks are encountering more and more heavy Soviet vehicles such as the T-34 and KV-1, which are hard to defeat with contemporary weapons and he demanded a new tank to be developed, that would estabilish the German dominance on the field of battle once again. He specifically demanded

As a result of this discussion, Waffenprüfamt quickly tasked both Daimler-Benz and MAN with developing a new 30t vehicle for the German army. We all know the results: DB came up with the VK3001DB and VK3002DB, while MAN came first with the VK3002MAN and then with the Panther, heavily based on it.

First report about VK3002MAN is dated to 22.1.1942, with MAN representatives reporting that the VK3002M weight increased from original 32,5 tons to 36 tons, the armament considered is the newly-developed Rheinmetall 75mm L/70. A small model was made and was to be presented to Hitler, while MAN promised to make a prototype until May 1942.

The DB and MAN models were indeed presented to Hitler in January (he preferred the MAN version), but Reichsminister Todt insisted that he should meet with the designers first.These meetings took place by the end of January and numerous remarks were made during them, including:

- the army prefers torsion bars over leaf springs
- MAN tracks are wider, which was seen by the army as an advantage
- the earlier cooperation between DB and MAN is not effective and should cease

As a result of these discussion, the MAN proposal was slightly favoured, but DB was still not without its chances, but in the meanwhile, Todt was killed in a plane crash and was replaced by Albert Speer, which somewhat tipped the scale in MAN’s favour. While initially Hitler preferred the DB “Panther” proposal, during the final design evaluation by a committee in 11.5.1942, MAN was declared the winner for following reasons:

- the DB design was not considered completed and the vehicles wouldn’t be read for production by December 1942
- the Rheinmetall-developed turret could not be fitted on the DB design, because its turret ring was too small and no other turret was readily available
- MAN suspension proved to be more stable firing platform
- MAN engine had longer cruising durability

As such, the committee verdict was passed to Hitler on 13.5.1942. Hitler studied it overnight and in the morning, he stated that he agrees with the committee position and approved the MAN design. First steps towards the Panther were taken and there was no going back.

This tank will be roughly on par with the VK3001DB. Expect a bit more accurate gun, roughly equal mobility. It looks better though :)