Hello everyone, today, we are going to try something new. We have an article here from CaptainNemo about USS Alaska. Now, I am not into ships that much, but I think it’s really cool and I am looking forward to trying World of Warships, so – why the hell not. Enjoy!

Before we begin, further articles will cover: “The Guns”, “Operational History” and “Comparison between other similar ships of the time.” And in the guns and comparison section I hope to discuss more of World of Warships. ~ CaptianNemo

The Alaska class of “Large Cruisers” was originally conceived back in 1938 when the Bureau of Construction and Repair (BuC&R) conducted a comprehensive study of cruiser designs was conducted ranging from 6,000 ton to 38,000 ton cruisers. The Alaska Class would come to be termed as “cruiser-killers” by the Navy. As “cruiser-killers”, the Alaska Class was also designed protect carrier task groups (TG) and to operate independently and alone against enemy surface forces, namely they were designed to counter the threat of German and Japanese long range cruiser forces in both of these roles, that were built, were being built, or planned to be built and armed with 8 inch (203mm) guns which were the maximum allowed on Heavy Cruisers by the London Naval Treaty of 1930. 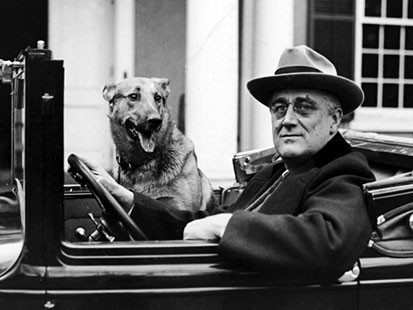 President Franklin Delano Roosevelt (F.D.R.) himself influenced the creation and development of the Alaska Class which he felt was needed to counter the threat of German cruisers. F.D.R. had been previously the Assistant Secretary of the Navy between 1913-1920 and put his experience in that position from seeing political roadblocks on shipbuilding, political infighting and bureaucratic nonsense to streamline (speed up) the Navy’s procurement of new ships by, at times, acting as the “de facto” Secretary of the Navy or by personally getting involved with the design process and specification of new ship designs during his presidency. To cite the more extreme examples (Iowa Class) of involvement F.D.R. went to outside designers (BuC&R typically did all of the design work in-house) to draw up ship plans and then issued requests for such a ship with specifications that matched his personal designs. To help cover his tracks he had plans drawn up of ships not matching his specifications so that his design would be chosen after a careful review of the designs presented to the Navy. (Guns will be covered in another article) 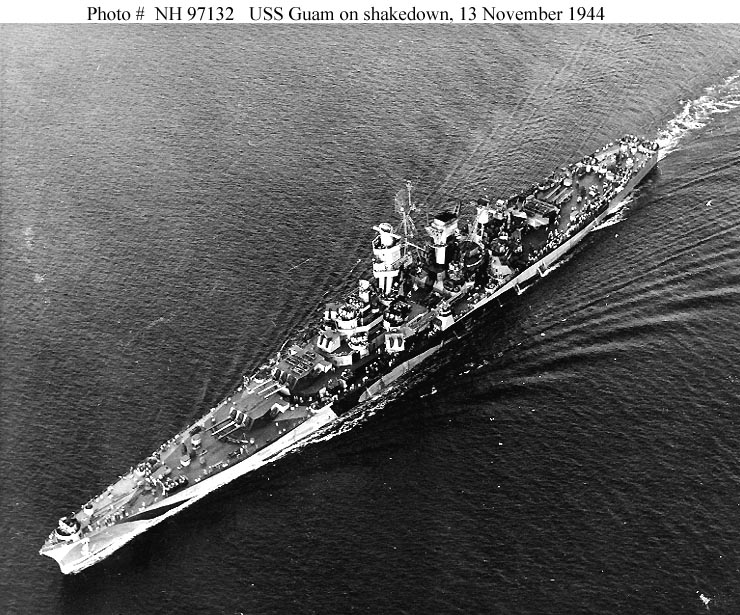 To do this the Alaska Class were given the ability to cruise up to 10,000 nautical miles at a speed of 15 knots @ Standard Displacement, and at Full Load, this cut 1 knot off their speed to obtain the same, 10,000nm, range. Engine efficiency for the Alaska Class was the result of nearly 10 years of steady development in metallurgy and naval designing. The Alaska Class used higher pressures, up to 634 psi, then previous designs which had been limited to 400 psi and 700° F in Mahan Class destroyers in 1933 due to concerns by engineers and by captains with increasing the operating temperatures and pressures. The Mahan Class were also the first to have reliable double-reduction gears on the steam turbines which helped to improve efficiency and reduce the overall total weight of the machinery needed to propel the ship to a given speed. The Navy standard, ~1935-36, by the time the Alaska Class was designed was 600 psi at 850° F with the boilers being capable of producing 634 psi and over speeding the turbines to produce 180,000 horsepower (versus a normal 150,000 horsepower) although damage would occur to the turbines if this was done for an extended length of time. As a result of this horsepower the Alaska Class could do 31-33 kts and when overloading the turbines do 35 kts for short periods. A common complaint was that the Class did not have the maximum amount of power (speed) then available as the ships could have been equipped with the same engineering setup as the Battleships and had 200,000 horsepower on tap all the time. This would have allowed the Alaska Class the ability to chase down nearly any other ship but at the time the Class, as designed, was to be used against ships that were believed to be slower than the Alaska’s so the additional weight in machinery was not considered to be sufficiently needed nor the additional cost expended when the designers were already trimming weight where they could without extremely sacrificing the protection of the ship.

The armor for the Alaska Class is a compromise from several early design studies for a “Large Cruiser” showcasing the overall design of the ship and several variations of that design which shifted arms and armor and speed around into several designs. The final design chosen was to protect the ship from 8 inch guns fired from Heavy Cruisers and use the 12 inch (305mm) guns longer effective range to take the Heavy Cruisers out. Armor on the Alaska class was 9 inches thick tapering at the bottom to 5 inches thick (228.6 down to 127mm), inclined at 10°, and covered more of the waterline then was typical for a standard cruiser. The area protected by armor was designated as an percentage (%) base of the length of the waterline, which was standard practice during and before WW1. Deck armor varied as well and could be 1-3 inches thick (16mm to 76mm) depending upon the deck with the conning tower being armored as well 10.6 inches sides (269mm) and 5 inches (127mm) on the roof. The Alaska Class were designed to resist a 700lb TNT* warhead from a torpedo although variations of early designs were designed with resistance to a 500lb charge of TNT which was considered the minimum charge a capital ship should be designed to resist for and this was done as a proposed way to reduce the weight of the ship. At the time of the design it was not known that the Japanese Type-93 “Long Lance” Torpedo carried a 480 kg (1,100lb of Type 97 explosive**) warhead. The torpedo itself would not be noticed until intact examples would be found in 1943 and the full realization of the threat it posed noticed. Effectively the Alaska’s underwater defense was better than the standard Cruiser due to increased stiffening longitudinally and increased coverage of the main armor over a larger part of the ship but noticeably worse than that of a Battleship and the design for the Alaska did included a double bottom which was improved by careful design to give the ship similar protection to that of a previous sketch which had included a triple bottom. The end result was a double bottom design that was reinforced by the ammunition magazines. This produced a much stronger double bottom design then a standard double bottom hull without the increased weight or strength of a triple bottom design and was one of many such compromises to go into the ship.
*All information I found was counter to William Garzke who said TNT (which I used here) which is interesting since many navy’s were using Torpex (US and UK Torpedoes) which is a much more powerful explosive per pound. Torpex is a secondary explosive 50% more powerful than TNT by mass. Torpex is composed of 42% RDX, 40% TNT and 18% powdered aluminum.

** Type 97 Explosive: The standard explosive charge was 60% TNT and 40% hexanitrodiphenylamine in blocks. This had first been developed by the Germans in 1907 and was very resistant to shock. This explosive was classified as Type 97 by the Japanese and was about 7% more powerful than 100% TNT. 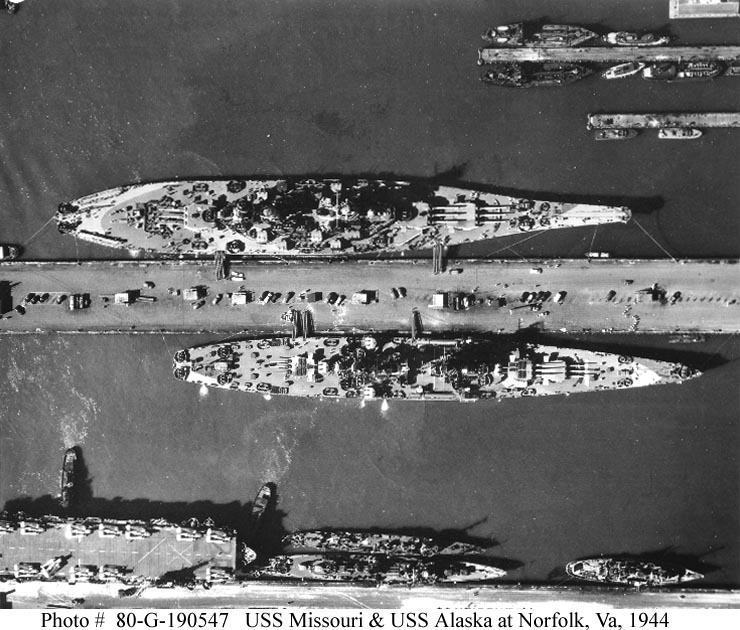 Also coming from Cruiser design, to the Alaska, was the implementation of a single rudder in the middle of the stern compared to the more usual design at the time of implementing a twin-rudder design for Battleships. As a result the operational tactical diameter of the Alaska Class was 870 yards and the Iowa Class Battleship with their twin-rudders could out turn, I.E. turn inside, the Alaska Class. That being said they were designed with much better damage control, compared to Cruisers, in that there was more subdivision in their construction to limit flooding of compartments and to limit damage from underwater explosions. From cruisers there was the general subdivision of the Alternating-Current (AC) electrical generating plants into four separate rooms, two rooms were for diesel generators and two for electrical generation by steam. Each plant could be sealed off from the others and independently provide almost 25% of the ships electrical power on its own. 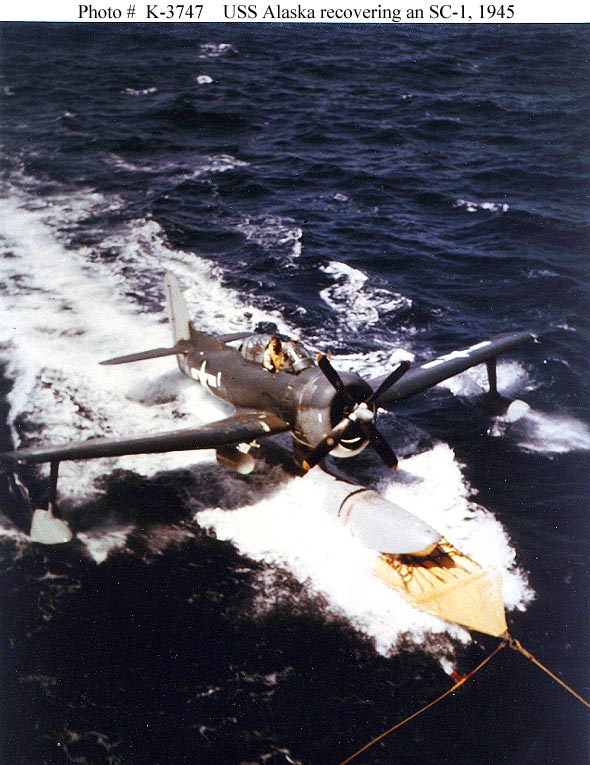 One of two optional sea planes for this ship, (Historically) the other is the earlier and more common Vought OS2U Kingfisher(Below). Although most photos showing the Alaska Class show the Curtiss SC Seahawk since the Kingfisher was being phased out and scrapped before the war was over even though it was a capable aircraft. Being a new ship the Alaska Class was equipped with the best the Navy could give it. (More details in operational history article) 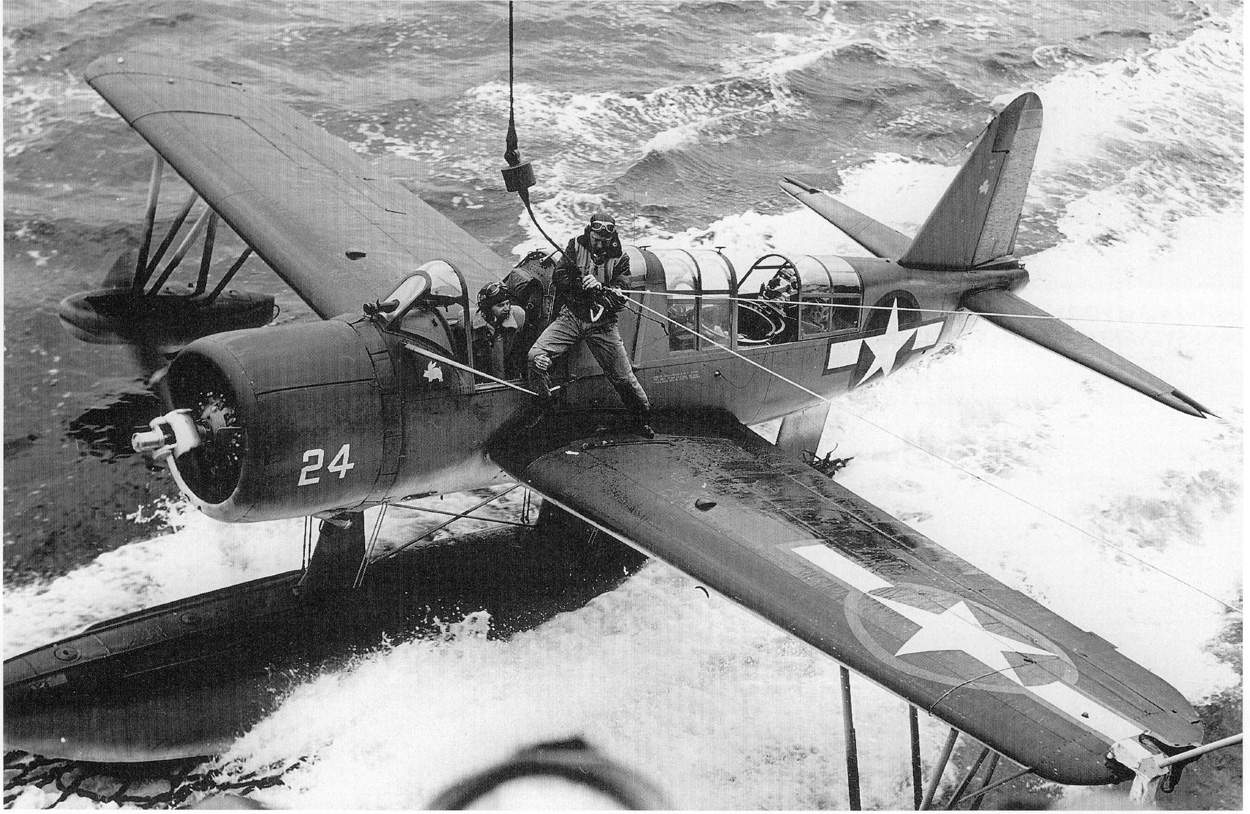 Less than a Battleship

-Less protection against shell falling short and passing through the water and impacting and piercing the hull below the main armor belt.
-Less Torpedo protection since there is less dispersion of the impact and explosion.
-Less Maneuverability due to a single rudder

Not a Battlecruiser. Why?

More than your Standard Cruiser

-Main armor extends over a much greater number of decks and over a greater length of the ship between the armored bulkheads.
-Additional longitudinal bulkheads compared to Standard Cruiser to help control damage from flooding (fore-and-aft) as a result of torpedo hits by stiffening the structure of the hull.
-Duplication of director leads (Gun Director)
-Better guns to take on anything the size of a Heavy Cruiser and smaller.
(German Pocket Battleships included) 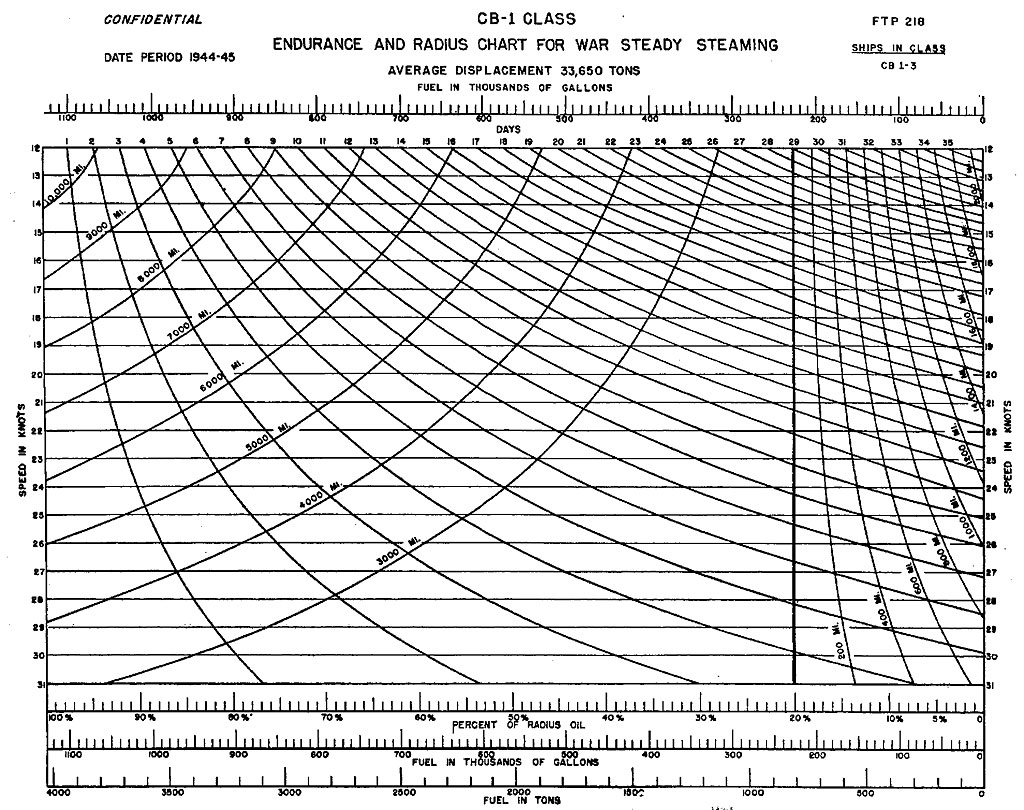 Armor (This kept it simple)