an interesting file found its way to me. The source is legitimate, but asked me not to reveal any identity. Basically, as you know, World of Tanks has a Chinese server too. This server, however, is not managed by Wargaming, but by a Chinese partner, called Kong Zhang Wang. Amongst other things, while Wargaming provides all the content, KZW also decides, what goes in which patch apparently.

The document I mentioned before are Chinese 8.8 patchnotes, leaked by a KZW employee (in form of KZW internal e-mail). 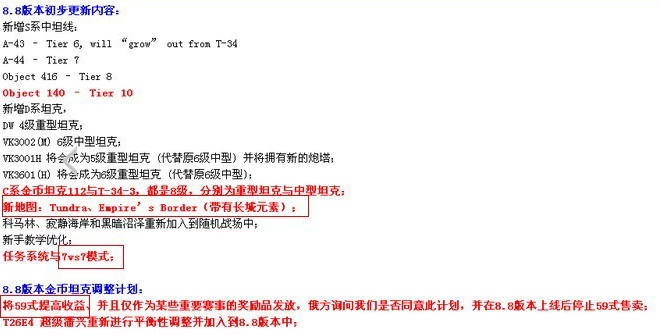 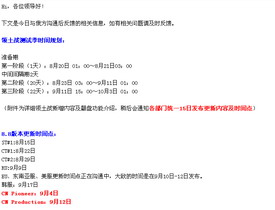 If you read Chinese, you might be able to glean something more out of it, but I’ll just describe the differences:

- first, there is a new map being introduced in Chine, called “Empire’s Border”, you might remember some screenies being leaked a while ago, it’s basically a Great Wall map. Is it China-exclusive? No idea.
- 8.8 is introducing 7×7 (7/42) companies on Chinese server (that means the mechanism is ready)
- in 8.8, the Type 59 won’t be sold anymore. Just for comparison: on EU server (and that’s including the “flood” vehicles), there are roughly 78 thousand Type 59′s. Chinese server (while cca two times bigger than EU server) has 410 thousand and it’s expected to rise to 450k until this patch is out. The Chinese partner clearly doesn’t care that much about that.
- finally, the 8.8 is scheduled to come on Chinese server (and worldwide) on 10th or 11st of September (Russian server: either 3.9. or 8.9., allegedly it’s unclear from the e-mail)
- VK3001H gets new turret

I don’t think the date is relevant to any EU/US release, but still, it’s kinda interesting to know there are such differences.