today, we’re going to have a look at one of the lesser known episodes from the tragic Warsaw Uprising. 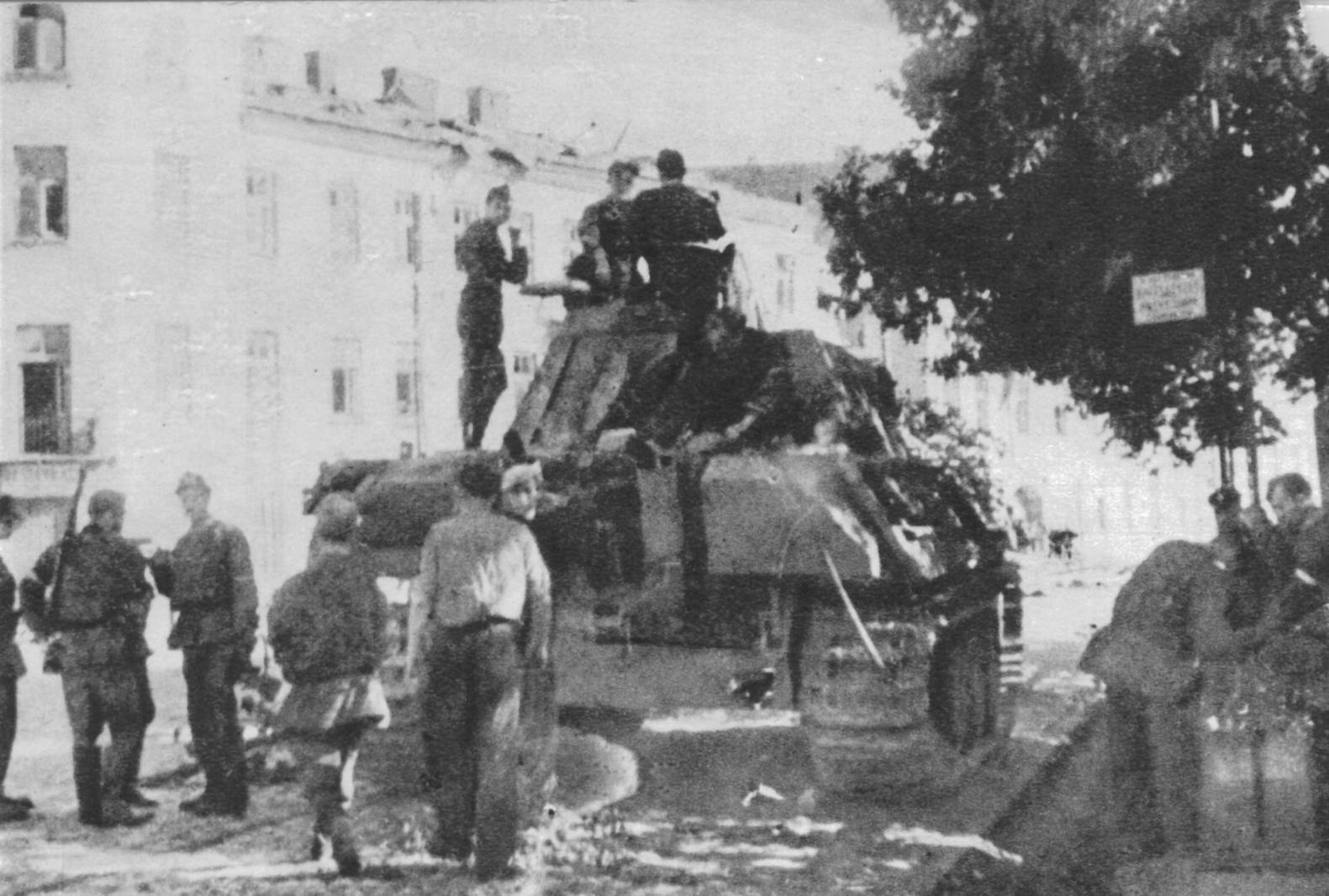 The Uprising started on 1.8.1944 at 17:00 and caught some of the Panther-equipped German units, stationed in the western part of the city off their guard. Amongst them were the brand new Panther G’s of the 27th Panzer Regiment of the 19th Panzer-Division. This unit was moved to Warsaw from the western front for some reast and to rearm with the new Panther Ausf.G tanks, getting rid of the older Ausf.A’s, that were transferred in turn to the 11th Panzer-Division.

Apparently, on 2.8.1944 in early morning hours, a few Panthers from the abovementioned unit were making their way thru Warsaw (the route took them thru following streets: Górczewska-Mlynarska-Smetna-Powazkowska-Okopowa). At Okopowa street (near the old Jewish cemetery), the Panthers were ambushed by Polish rebel soldiers with firebombs (molotovs) and one tank burned out. The crew got out in time, mounted the second Panther and they made a run for it. It didn’t get too far however. It turned to the Mireckiego street, where it was first hit by handgrenades and then with a Gammon bomb (British made grenade, usable against armor), that damaged the turret, making the tank swerve violently off the street, crashing into a nearby wooden house and getting stuck. The crew was then taken prisoner. Third Panther (back at Okopowa street) was also damaged by handgrenades and immobilized, its crew bailed out and it was captured practically intact.

Since two out of three vehicles were captured almost undamaged, the Polish soldiers decided to repair them and use them in combat. They didn’t get to do it on the second day (2.8.) and the tanks just stood there, but on the third day, the Polish actually started working on putting both vehicles in action. Two 6-man crews were formed to operate captured Panthers as a an “armored platoon”, formally under the “Zoska” batallion. These crews (like other soldiers during the Uprising) actually didn’t use names, they used nicknames (in brackets)

The ranks are in Polish, Ppor equals to 2ndLt, Pchor is some form of NCO if I read it correctly, Kpr. roughly equals corporal and I have no idea what “Dca por.” is. Either way, at the same time these crews were formed (6 crewmembers were selected because the tank commanders had other tasks too – they were local rebel commanders and ranking officers after all and when needed elsewhere, the tank had to have full compliment.

At the same time the crews were selected, one captured German tried to actually make the Panthers work. It was discovered that first Panther’s fuel pump is damaged. The Polish struggled with the tank whole day, until skilled repairman Jan Luniewski (who worked earlier in German tank repair plant apparently) arrived and managed to get the first Panther going by fixing the air filter and tweaking the ignition. The tank was either in the evening on 3.8. or early on 4.8. moved to a nearby street the test its gun: the target was a German machinegun nest, which was knocked out by two shots.

Meanwhile, the second tank was still stuck in the wooden house it crashed into and the Polish were trying to break it out. They tried to tow it out using the first Panther, but this failed – the Polish soldiers then had to manually dismantle the house the Panther crashed into, only then could they get the second Panther out.

After that, an inspection was carried out. It was found out that the first Panther had only minor damages and it was decided to use it in combat. The tank was named “Pudel” in honor of one fallen Polish officer, but the crew called it informally “Magda”. The second tank had to be repaired further, but recieved the nickname “Felek”. Little is known of the extent of its exact damage, the confirmed is the destroyed rear turret plate (by the Gammon bomb), that was repaired at some point during next two days.

The first tank went the action for the first time during the St.Sofia hospital liberation, the destruction of local concentration camp and the assault on Police school on 5.8.1944. It proved especially useful during the concentration camp assault (contributing to the fact only one Polish soldier died during the operation), but the two other actions were paid by many more casualties. “Felek” was ordered to support the assault on the Police School, but because of an operational screw-up, the crew didn’t recieve the permission to open fire before the entire attack was underway. The building was heavily fortified and machinegun fire killed many Polish soldiers, before the Panther arrived and turned the tide. In the end, the Polish did succeed in taking both objectives (school and hospital), but the price was high. 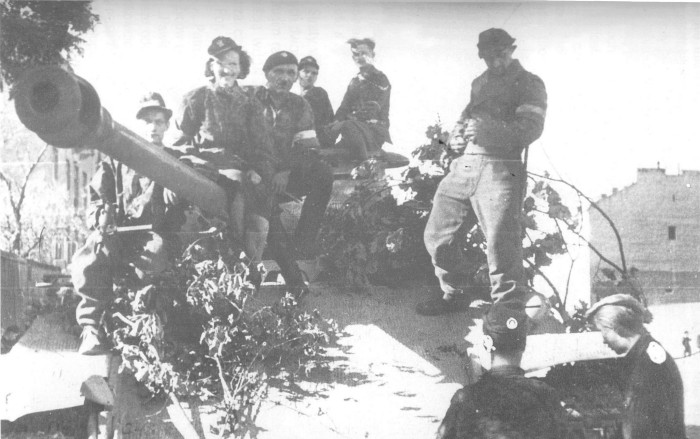 The tanks went to action again on 8.8 to support the Polish troops fighting the Germans on Karolkowa street. However, as the “Magda”/”Pudel” arrived and turned from Mireckiego to Karolkowa, it was hit by three German 75mm tank shells, either from a Panzer IV Ausf.H, or from a Jagdpanzer 38t (unclear). A part of the crew was wounded, but the vehicle recieved only minor damage and was repaired on 9.8. – on 10.8. the “Magda” crew managed to knock out a German SPG and a heavy armored car (SdkFz 263 8-Rad) and in the afternoon a machinegun nest in Sv. Karol Boromeusz church.

However, by that time the Polish situation on the Old Town was critical. Furthermore, “Felek” suffered from battery malfunctions (deemed irrepairable). It was decided to destroy the “Felek” – its ammo was transferred to “Magda”. “Magda” fought the next day too (11.8.) in support of the rebel counterattack, but it was damaged and abandoned by the Polish.

The Warsaw Uprising is one of the saddest episodes of World War II history and ended with tens of thousands of dead civillians and thousands of troops on both sides. After the war, Poland did apparently recieve, salvage or capture several Panthers (just like Czechoslovakia). Apparently, those few pieces that survived the war were used for training: 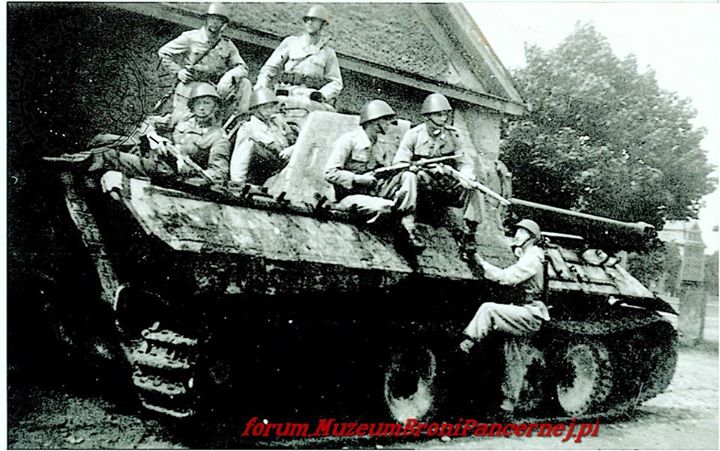