Disclaimer: this is an highly speculative article which tries to find a logical link to a tank design between secondary sources. The following has to be taken as author’s interpretation.

Late war Germany found itself lacking capable light recon tanks amongst its many shortages. There were a few obsolete light tanks pressed into the role but by 1945 they were mostly worn out, with the few working remains hopelessly outmatched by Soviet and Allied fast medium tanks. One answer to this was the usual flurry of paper projects, which however proved to be too complex and expensive (VK 16.02), using precious chassis and making little sense (Recon Panther) or being underpowered from inception for the role (early turreted Jagdpanzer 38 (t) with Panzer IV turret and to a lesser extent the Panzer 38D). Spielberger briefly mentions that the E-25 proposal included a recon tank version but gives no further details, leaving us still into obscurity. There is however one further, unlikely source that might bring us further details, although usually regarded as something very different altogether: Hahn’s “Klein-Tiger”.

The project as described by Hahn might seem a fantasy nonsense and indeed it doesn’t seem to match anything Tiger related, as very well described in this article. That is, as long as we consider the Klein-Tiger as a Tiger related project, however what if it was something entirely different in design and purpose?

We should start with the assumption that Hahn isn’t a tank specialist at all (he worked on Penemunde and V-2 related projects), while having excellent access to  raw data thanks both to war experience and undoubtedly good personal connections or his very own secret document cache.

On this base, it’s reasonable to assume Hahn found very scant data about a tank project and tried to reconstruct it with limited technical knowledge. Given this, we can trust Hahn on raw data but we should be careful on his reconstructions as he commits some grave mistakes on details like abbreviations ( for example, PWK may mean high pressure or high performance) so that we get nonsense description like a planned 10,5cm L/68 cannon for the E-25, where in reality the 10H64/PAW 1000 was meant.

So, what can we extrapolate from his tank description? 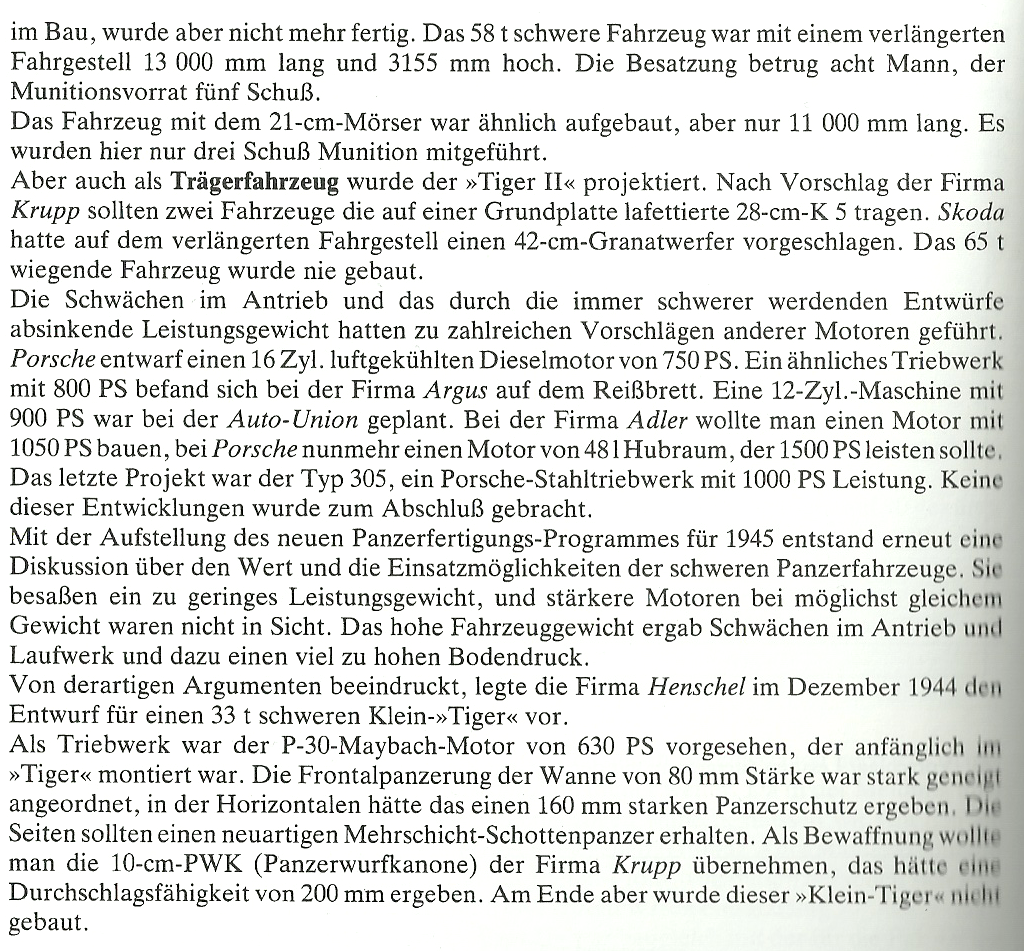 - He was talking about the Panzer program for 1945, which should exclude anything Tiger I related, while we know Tiger II proposals were made by Krupp and rejected.
- He did find a 33 ton project with 80mm armor heavily sloped (to be effective 160mm but a 60° slope is very rare in contemporary designs and we should assume it was just steeply sloped)
- A 600 HP engine was to be installed
- A 10cm cannon  was to be used and the description matches the 10H64.
- The tank was likely dubbed somewhere as “Klein-Tiger”.

Every single other detail has to be discarded as his reconstruction as specifications cannot match a 33 ton tank. One platform by one particular plant would however provide a pretty fitting match, if we rule out some sources of confusion.

I will now quote Spielberger on the E-25:

- “Argus was not unknown in tank building, for many brake aggregates, especially for the Tiger, were developed by this firm”.
- “The specifications of the tank required a 25 ton platform for recon and pursuit”.
- A 600HP Argus engine was planned, however in the end Tiger’s Maybach HL 230 was installed
- Both the 75mm L/70 and the 10.5cm PWK were planned as main weapons.

Panzer tracts 20-1 mentions the E-25 as a 25 ton tank destroyer armed with the 75mm L/70 with a 50mm frontal plate sloped at 50-55°, while Spielberger mentions the tank was planned to have both engine and transmission at the rear to allow for the heaviest armor and weapons at the front. No specifications for the recon role emerges from either Spielberger or Doyle but the tank hull matches quite closely the E-25, which Hahn rates as a 26.3 ton heavy tank in his description of the E-series.

Let’s now do some dirty calculations:

Removing the 75mm L/70 would allow for a pretty much unbroken glacis plate, bringing the hull weight back to 25 tons.

We now need a suitable turret to match the tank profile and as no major redesigns would be allowed it’s likely they would recycle the simplified Panzer IV turret used in 38D proposals: 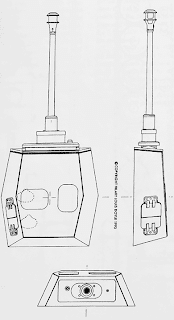 The turret design has no cupola (but welding one wouldn’t have been a huge production issue) but it as the advantage of being easy to produce and offer great protection: 80mm frontal armor plus a large, flat 80mm mantlet, all sloped at 10°. Such a turret would weigh roughly 5-6 tons, leaving us with 2-3 tons to be distributed, of which the 10H64 woud roughly take one ton of weight. What’s left can be given to protection. A bolted or welded extra 30mm glacis plate would take most of the weight, while it’s very likely that Hahn’s “multi-layered armor” wouldn’t be anything else than the common side-skirts already used on Panzer IV. Not exactly 160mm effective front or Tiger sides but more than adequate for a light tank.

What we get from assembling all of this is a pretty compact tank (hull height 2m, turret is also pretty short), with great mobility (power to weight ratio of 18 to 21 HP/ton and a suspension rated 65 km/h), reasonable frontal armor (same as the Panther, enough to duke it out with Sherman and T-34) and a gun ideal for ambushes, short ranged but with excellent armor penetration and a good HE round. Perhaps a tank not as impressive as the bigger felines but still the peak of WWII German engineering.

SilentStalker kindly prepared a draft drawing, however let me stress this out:

This is an extremely speculative draft, take it with a pinch of salt.

Could this tank really be Hahn’s klein-Tiger? Perhaps, we will likely never know.
Would it be feasible at the time? This would require more measurements and a mechanical engineer, however Ernst Kniepkamp (Head of Wa Pruef 6 and the man behind E-series and most German tank suspensions) was behind a later tank which used suspensions and transmission very similar to the E-series.