Special thanks to Zarax for tracking down the source of Klein Tiger.

today we I address one of the most notorious garbage “tanks”, that keeps popping up occasionally even on “respectable” forums and sites, the Klein Tiger. So, what is the Klein Tiger and what does it do?

The Klein Tiger (“Little Tiger”) tank proposal popped up some time ago on Achtungpanzer site, know to contain some made up stuff. I suspect it is from there that it got popular, but the original source is a book, called “Waffen und Geheimwaffen des deutschen Heeres 1933-1945” (Weapons and secret weapons of the German Army 1933-1945) by Fritz Hahn. From what I can tell, this book contains a lot of… let’s say dubious pieces of information and I suspect it might be a source of more than one German army hoax.

The author himself – Fritz Hahn – is actually quite old, he was born in 1922 and according to the book he still lives. During the war, he was active in the army testing department and was one of the guys, who actually shot the V2 rockets from Peenemünde and later allegedly saved some secret files from destruction. After the war he lived in the USA. From his biography, he had nothing to do with tank development and it’s my personal opinion that what we have here is the German version of Belton Cooper. Here’s his bio (in German of course): 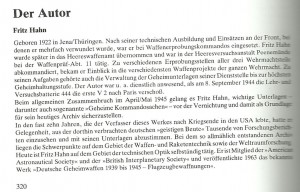 For those, who don’t know, Belton Cooper was a US technician, who worked on the Shermans and later wrote a book about them, called Death Traps. While he did live during the war and his personal insights into the things he did are valuable, the book became the source of the notorious Sherman tank myths, some of which survive till today and are repeated by people ad nauseam (like the “Shermans burned like hell” myth). For example, Jingles – who otherwise probably knows better – recently did a spoof about that book, repeating some of the Belton Cooper’s garbage (by which he even drew the attention of The_Chieftain). So once again, if you run into the Death Traps book, do NOT take all of it seriously. Especially the parts that were “above his paygrade”. As I wrote earlier, I suspect Fritz Hahn to be something like that. Back to the Klein Tiger though.

From what I can tell, the only publication source of the Klein Tiger is this book. Here’s what it says about it: 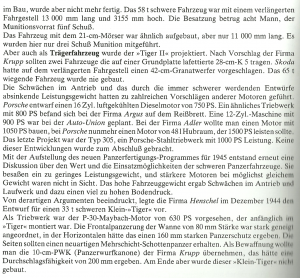 “….in 1944, the company Henschel laid down in December 1944 a proposal for 33ton heavy Klein Tiger. As the powerplant, the 630hp P30 Maybach engine was envisaged, the same engine that was installed from the beginning in the Tiger. Frontal armor of the hull was 80mm heavily sloped armor, which gave 160mm of horizontal protection. The sides of the hull were to use the multilayered armor of new type. As a weapon, Krupp 10cm PWK was to be used, which had the penetration of 200mm. In the end, this Klein Tiger was not built.”

So, we have a “smaller” Tiger, weighting half of the weight of the original Tiger, with better frontal protection, running with the same engine. Sounds impossible? Well, that’s because it is.

There are so many issues with this concept, that I don’t even know where to begin. The most obvious issue is that it’s simply TOO LIGHT. There is no way such a vehicle would weight 33 tons.

Take the frontal plate for example.

I’ve made some calculations, based on the Tiger frontal armor. I disregarded the Kugelblende (MG shield) and viewports volume. Also, check this out, the Tiger internal schematics: 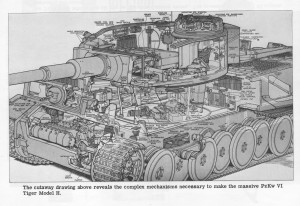 What does it all mean? If you look at the schematics closely, you’ll notice that the Tiger was constructed the way it was for a reason. Due to its complex suspension system, it was basically not possible to make the Tiger any lower. Furthermore, if you check the engine layout of the Tiger, you’ll notice that it was probably not possible to make the Tiger any less wide, the engine itself was quite big. Therefore, I assume that the Klein Tiger hull would be shorter, with a different turret (we’ll get to that), but not any less wide or lower – again, there is a reason the developers used the wheelsize they did, with smaller wheels, the clearance would be compromised.

Where I am aiming with all this? Simple. If the Klein Tiger hull is theoretically just as wide and tall as the Tiger itself, we can roughly calculate the frontal armor volume. In order to reach lower weight, you HAVE to reduce armor volume (thickness). You can’t compromise your side armor too much (remember, Soviet infantry batallions were equipped with large number of AT rifles, that caused casualities), so the way to go is probably sloping the armor (which would make the hull even WIDER, otherwise the proposed engine wouldn’t fit (you can completely disregard the side layered armor, that’s utter crap and it’s also pointless).

So, back to the frontal armor.

VERY roughly calculated from schematics, the volume of frontal armor of the Tiger Ausf.E is cca 420 thousand cm3. This number is not too imporatant, merely the method I acquired it with is, because it allow us to compare, how heavy the Klein Tiger frontal armor would have to be, using the parameters the book proposes.

You see, in order to archieve 160mm protection, using simple mathematics, the 80mm plate impact angle has to be 60 degrees (from vertical, eg. horizontal impact angle). That’s a LOT. Now, let’s say the hull height of the Tiger tank is the same, eg. some 1380mm (again, it doesn’t matter if it’s really so, it’s the method I used that counts).

As you can see, this is pure fantasy, especially when the vehicle itself is supposed to have HALF the weight of the Tiger. And this is just one example. No wonder when presented with this “amazing discovery”, SerB made fan of special ultralight Ahnenerbe steel.

And what about the engine? Would it fit the shorter vehicle? Not really. Have a look at the schematics above, where would you put this beast: 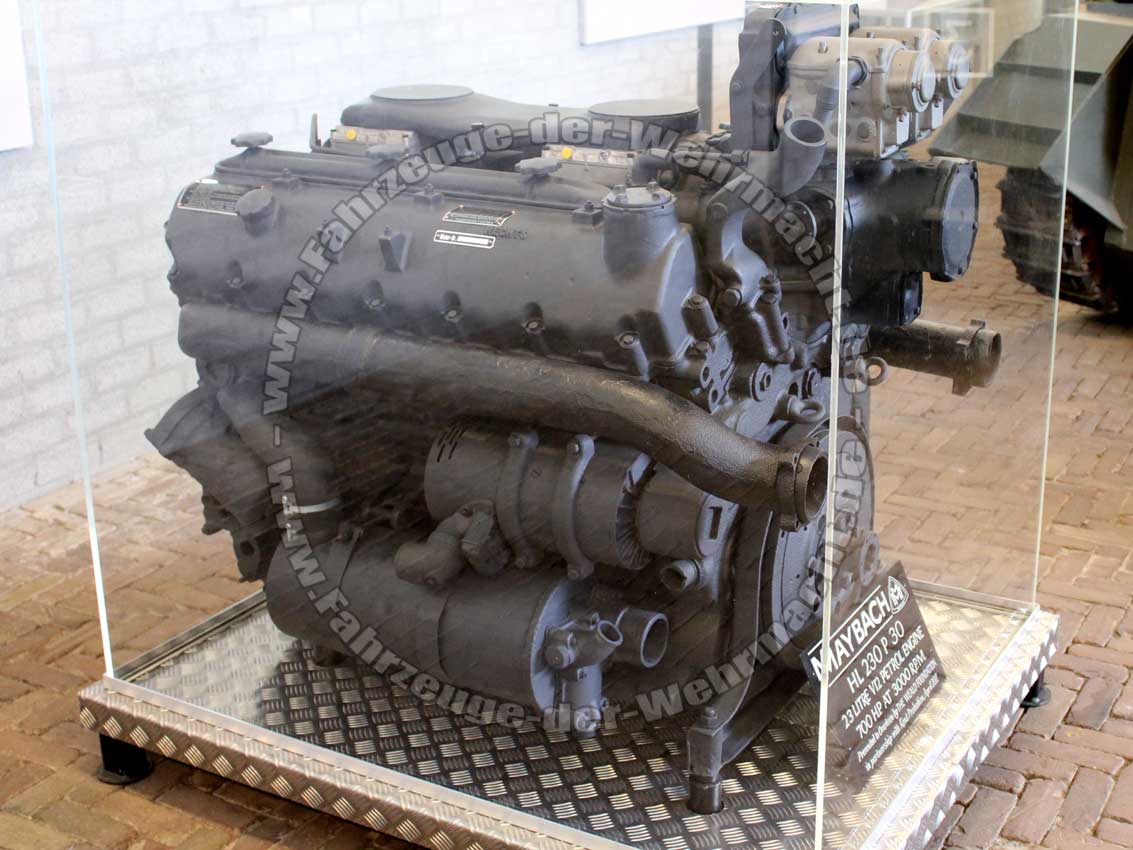 What about the turret? Could you save some weight there? Well, yes and no. You can’t simply put a lighter turret, that would totally compromise the vehicle protection. Besides, the Tiger turret itself is not that heavy (11 tons), compare it to the historical weight of the Schmalturm: 7,5 tons. No big savings there.

Another illogical issue, the gun.

The author claims for the vehicle to be equipped with the 100mm PWK. This most likely refers to the Panzerwurfkanone 10H64. This weapon was basically an low pressure gun, capable of defeating up to 200mm of armor at any distance, because it used cca 6,5kg HEAT warheads. All and all it was quite modern and there were very late war pojects to equip for example the Panzer 38d (various versions thereof), or even the Jagdpanzer 38d (basically a modified Hetzer) with this gun. It was relatively cheap to produce too. Any issues with it? Of course. Effective range: 750m (88mm L/71 effective range: 4000m+) Theoretically it could shoot much further, but you wouldn’t be able to hit anything. Oh yes, and there is also the low muzzle velocity (cca 550m/s, compare it with the 88mm L/71 PaK 43 for example – 1000m/s)

What the hell is the point of equipping a tank with massive effective frontal armor with a gun that can’t hit shit at over 1km? Absolutely pointless. Of course, on closer distances it would be effective, but the vehicle would be pretty tall (big target to shoot at), the turret would be dubious (most likely some form of Schmalturm or Tiger II-Turm) and for close combat, a vehicle with paper flanks is useless.

Klein Tiger is a fake, totally made up vehicle. What were the reasons behind its birth we will probably never know, but for some reason, players still keep suggesting this to SerB for implementation (once per a few months this vehicle “appears” in the Q&A). I blame mostly the Achtungpanzer site, that has some total crap, plus the wehraboos, who promote it. I wish these “superweapons” would stop appearing and more effort was given to real research, like Mr.Doyle and his colleagues do. Oh, and I don’t have to mention that neither Spielberger or Doyle mention this vehicle, do I?

47 thoughts on “The curious case of Klein Tiger”