recently, player Lonigus posted a thread about the alleged bug on the EU forums. According to the pictures in the thread, his turret mechanism got destroyed, preventing its turret rotation. 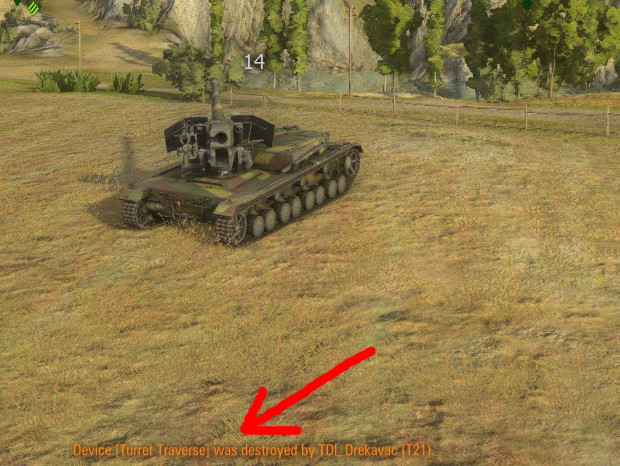 Only… Waffenträger auf Panzer IV has no turret!

It’s like this: while Waffenträger auf Panzer IV (furthermore referred to as WTP4) has no formal researchable turret, it in fact HAS a turret module. Every tank destroyer formally has one. To explain it in a bit more detail:

A “turret module” in some cases is not a module per se. It’s a segment of data, that contains certain variable values, tied to each vehicle. These values include:

- formal turret module tier
- turret module health (this is added to the total health pool of the vehicle)
- viewrange (that usually depends on turret)
- traverse speed (includes gun traverse speed for turretless tanks)
- turret rotator (!) health (this is not the health that is added to the total vehicle healthpool, this is the formal health of the vehicle module)
- observation device health
- price

If we take as an example the Jagdpanzer IV – it actually has a formal string of data called “Jagdpanzer IV turret”, that contains the values written above. However, the important part is: this turret is virtual – you can’t research a “turret” for Jagdpanzer IV and it’s not modelled in the vehicle (unlike on turretted tanks, you can’t knock out Jagdpanzer IV’s gun traverse).

WTP4 has exactly this – only it gets more complicated: it doesn’t have researchable turrets, but it HAS in fact two turrets. One is called “Waffenträger auf Pz.IV für 12,8cm” and the other is called “Waffenträger auf Pz.IV für 15cm”. These turrets are not unlocked by the player, they are bound to the gun. In other words: if you switch the gun from 12,8cm to 15cm, you switch the turret also. In values, both turrets are identical (same viewrange etc.) – this is however NOT always the case.

Panzer Sfl.IVc (despite being turretless) also has two turrets: one for first two guns, the other for the top (long 88mm gun), they are different in the way that the second Sfl.IVc turret provides slightly less (I think, it’s just a value and I don’t have anything to compare it with) camouflage. On the other hand, the “turret rotator” module is missing: you can’t knock out Pz.Sfl.IVc’s “turret”, reducing the gun traverse speed.

Back to WTP4 – in our case, there not only are two turrets tied to the gun as I wrote above, these turrets also have a turret rotator module implemented into the vehicle model. That means you can actually knock out WTP4′s turret and make it rotate slower, like when a regular tank turret is damaged. The same applies for tier 8 (RhB WT) and tier 10 (WTE100) – they both can have their turrets knocked out. So, in our case, it’s not a bug, it’s a design feature.

All that was written above comes from datamining the WoT files, something that’s not exactly encouraged. It serves only for explanation purposes. Hope it helped.