The biggest deployment of the BT tanks abroad was the assault on Poland, when the Soviets did set out to meet their ally, Nazi Germany. Units, that took part in the aggression against Poland were mostly mobilized in the western military districts: Belarus and Kiev special military districts to be exact. Altogether, the Soviets had about 2000 BT tanks at their disposal, 1617 of which were the BT-7 tanks. 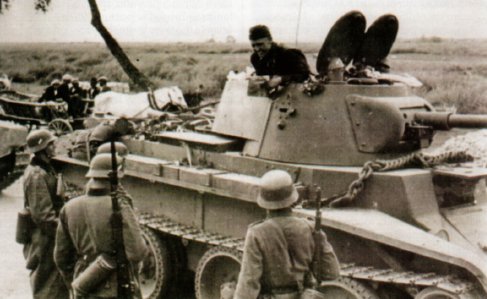 By the time they were attacked by the Germans, the Polish had roughly 880 tanks, 125 of which were the 7TP. Most were committed to fighting the Germans so when the Soviets stabbed the Polish cowardly in the back, the Polish defense definitively crumbled. Furthermore, no Polish tank was an equal match for the BT tanks. The 7TP tanks could match only the Soviet T-26′s – both tanks evolved from the same tank: the British Vickers 6-ton.

Despite their overwhelming superiority, the Soviets did not avoid losses, but compared to the defenders they weren’t high. Most of the BT tanks were – just like before – lost in city fighting, knocked out by Molotov cocktails and by AT grenades. Polish 40mm Bofors also proved to be effective, being able to penetrate the BT frontal armor.

The Polish campaign was barely over when the Soviet Union attacked Finland. The war was supposed to be swift. The Soviet estimate was 14 days – in fact, the Soviets were so sure by their victory they already printed invitations for the military parade in Helsinki, that was supposed to take place on 21.12. as a gift for Stalin’s 60th birthday. In armor, the aggressor outnumbered the defender 75-80 to 1. And those were only the units mobilized in the Leningrad district. The Finnish had only 32 tanks, most of which were leftovers from WW1, so the Soviet optimism was seemingly justified.

However, unlike in the Polish campaign, where the deployed units were mostly active ones, in Finland the Soviets deployed mostly the units activated in rear area districts, armed with mothballed tech from army reserves. The reason for this decision is not exactly known, because the Soviet army did not suffer from the lack of vehicles or armies. Most historians agree that it was supposed to be a mobilization test, with the combat experience gained against seemingly weak enemy being a bonus.

Finland however differed from other Soviet opponents apart from the spirit of the defenders with one more thing the Soviets underestimated: the climate. Transfers over frozen Karelia alone were quite requiring, but the Finnish built a whole bunch of anti-tank obstacles, usually heavily mined and covered by artillery fire. Forest notches proved to be a huge problem, as they were usually used by small anti-tank units for ambushes, retreating after the first strike to sometimes appear on the Soviet flank.

Rear part of the BT-7 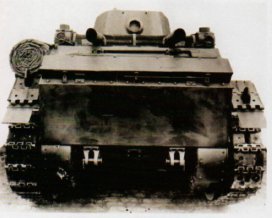 In order to realize the extent of engineering works the defenders managed to set up we can show an example of the Soviet 13th Tank Brigade advancing towards Kiviniemi, that had to in one day overcome five anti-tank trenches and one of its companies lost 8 out of 10 tanks in minefields. This experience has exposed the fact that the units lack the means of tank recovery, so even lightly damaged tanks had to be left on the battlefield and destroyed in order not to fall in enemy hands. For example the 1st Light Tank Brigade only had one Komitern tractor, one Voroshilovets tractor and two STZ tracked tractors.

The assault on the Mannerheim Line also exposed the issue of tanks not communicating properly with the infantry. According to the logs of 91st Mixed Division chief of staff, the infantry, riding on tanks, dismounted at the first signs of enemy fire and scattered. The solution was the sugar and whip method, with generous rewards to those who held on and with penal batallions for those with weak will.

The experience from earlier fights was confirmed: the fast BT tanks – when not using their speed – were vulnerable both to AT gun fire and to improvised AT weapons because of their thin armor. In Finland, mines also took a heavy toll amongst the tank crews. Terrible cold and layers of ice also caused problems to the BT tanks. The fuel was freezing (especially the BT-7 tank diesel), metal parts were cracking and the tracks because of bad (or rather none whatsoever) grousers lost grip easily. The producers were bombarded with demands to rectify this. Another huge issue was the supply. A lot of tanks were not combat capable because they lacked fuel and many wounded froze to death, because noone took care of them. Again, just as an example, here’s a list of the total losses of the 13th Tank brigade (12.3.1940):

All in all, the “winter adventure” did cost the Soviet army the lives of 100 thousand men and the loss of 3500 tanks of all types.

It’s an interesting parallel that just like the Soviets imagined they would win in Finland in 14 days, after the Soviet debacle in the Winter War, the Germans came to the conclusion that the Soviet Union would crumble within a few months. And that’s not all: same was the underestimation of the weather and the defenders’ resolution.

If we are to compare only the comparable tanks, when the assault occured, the Wehrmacht only had 965 Panzer III tanks in 16 tank divisions (mostly Ausf.E and F, partially G and H). German PzIII’s had the advantage of thicker armor, they were also wider, so there was more space inside, where 5 crewmembers could be placed with well distributed functions. The Karl Zeiss German optics were of traditionally good quality and the radios allowed to communicate both with headquarters and with single tanks. BT-7 tanks were more agile and faster, thanks to better power-to-weight ratio 23kw/t (compared to the Panzer III’s 10,5kw/t).

Despite all this, the conflict ended up as a tragedy for the Soviets. Apart from the initial element of surprise, that cannot be underestimated and apart from the well trained cooperation between Wehrmacht and Luftwaffe, there were other factors causing such a failure. First and foremost it was finally revealed that the entire concept of fast tanks is flawed. In usual combat conditions, the tankers almost never had the chance to use their vehicles’ high speed. On the other hand, the lack of armor was felt painfully. The Germans had the same experience with their Panzer III’s in France and Africa. The BT tanks were threatened not only by Panzer III’s and IV’s, but even by Panzer II’s, equipped with a 20mm gun, that could – while using AP ammo – penetrate the frontal armor of the older BT-2 and BT-5 tanks.

But the biggest problem by far was the tactics. Soviet units only rarely trained for defensive combat and the Soviet manuals never even mentioned such things as delaying actions. The worst was the order “never retreat” – it was because of this order that the Germans could take entire armies prisoners. The Winter War lesson about the importance of supply chains was unheard – the proof of that are the reports from the front-line units. For example the 16th Tank Regiment, that was practically wiped out, lost only 12 BT tanks to the enemy, all the others either had technical problems or ran out of fuel.

But despite all the failures, BT tanks laid down the foundation for modern Soviet tanks. Developing the concept gradually via the A-20, A-32 and A-34 prototypes, Soviet engineers reached the balanced T-34 tank concept, that later became the symbol of the Red Army victory. But the price for that, paid by Soviet tank crews, was enormous.