The lack of air superiority became quite a problem for the German army in both World Wars.
Very often you will hear people spouting about “invincible Tigers only defeated by enemy airplanes”, which of course was only somewhat true until the Soviets started fielding 122 and 152mm self propelled guns, not to mention the IS series, while British and Americans also put 76mm high velocity cannons to good use on the other side.

The Germans of course were aware of the consequences of loosing air superiority and developed several solutions, of which we will cover only the ones based on tank hulls, ranging from sensible battlefield modifications to daring paper tanks that never reached the battlefield, using mainly “Gepard” by Spielberger and “Panzer Tracts 20-2” by Jentz & Doyle. 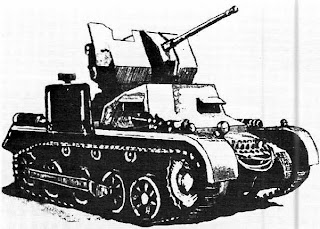 Possibly the very first German attempt at a flak panzer,  in 1941 at least 18 by then obsolete Panzer I ausf A chassis were converted into a flak panzer using the ubiquitous 2cm flak 38 and were used with moderate success of the battlefield until Stalingrad, where the last tanks were lost. 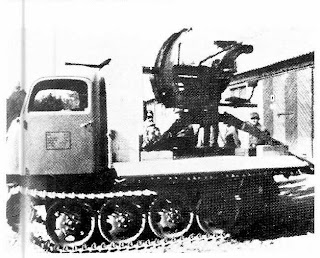 A relatively simple modification of the “Ost” tracktor, it was developed as AA/Ground support vehicle for mountain troops. Given similar experiments with the heavier PAK 40 the design seems reliable enough, especially given the dismountable gun specification.

Developed in 1943, it never entered service.

Early modifications based on Panzer 38(t)

Between 1943 and 1944 over 150 of those tanks were produced, putting yet again the 2cm flak 38 in a Marder-like configuration. By then though, their firepower left a lot to be desired but as in late war everything that could be used was fielded, they ended up serving until the very end. 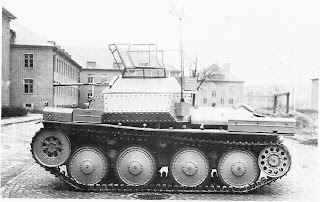 A second attempt was made relatively quickly to make a more flexible configuration, ending up in a recon/AA hybrid armed yet again with the 2cm flak 38 and a MG42, a configuration that would resurface on Paper for the 38D design later on. 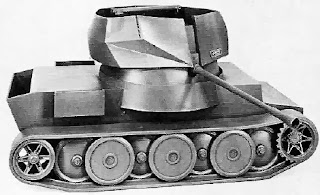 In September 1943 Krupp and Rheinmetall were requested to submit designs for a light flakpaner carrying the 3.7cm flak 36 (then upgraded to flak 43) or quadruple 20mm flak 38.

The proposal was based on the Luchs but later on maximum integration with Leopard components resulting in a 25 ton tank.
Ground support role was also planned for the tank so the turret had a respectable 50mm front and 30mm sides armor, enough to face most light tanks.

Several configurations were proposed, including the use of a single 5cm Flak 41 or Gerat 58 but ultimately the project was aborted due to the cancellation of the Leopard tank by Speer.

The very same studies were conducted on the VK2801, likely as waffentrager as the same hull configuration was planned to carry the 75mm L/70, although limited to an traverse angle of 15° to each side until the chassis development was aborted in 1945. 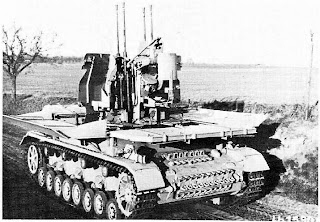 Being disappointed with earlier attempts, in 1943 Krupp was called in to develop a better solution based on Panzer IV chassis.
The very first solution was to still use the 2cm flak 38 but now in a “Vierling” or quadruple configuration.
This gave a much more intense barrage capability although still relatively short ranged.

Unfortunately the tank was not without drawbacks, resulting in very tall sides when enclosed (earning the nickname of “Mobelwagen” or furniture wagon) and in an unprotected crew when in firing position.

Additional requirements such as entrenching tools and a big supply of hand grenades for close defense (imho this was useless, the main guns could mince meat anything the grenades were meant for at much longer ranges and that close the crew would have been dead meat long before exhausting the grenade supply) meant that insufficient ammo was carried and thus the vehicle never left prototype stage. 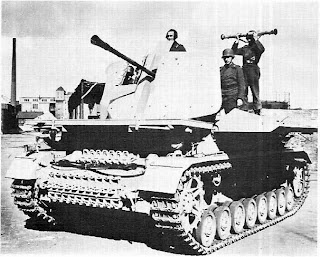 While seemingly puny, the gun was a much stronger advancement from the early 1936 “door knocker” and it could dish out punishment at considerable distances spitting lead up to 250 RPM and also pretty effective against tanks when using special ammunition able to penetrate up to 140mm/0° at 100m.

Both proposals evolved into slightly more compact 22ton turreted designs, called “Ostwind” (east wind, armed with the 3.7cm flak 43), and “Wibelwind” (with the quadruple 20mm) which got over 100 tanks in production.

A derivative prototype was made out of Panzer III chassis but it never reached production.
Another design was an enclosed turret with twin MK 103 cannons using a turret derived from U-boat AA, called the Kugelblitz, or ball lighting with about 80 of those being produced:

Of course, being nice designs with reasonable features wasn’t enough and like everything else it was brought to the extremes late in the war.
In order to gear up the Wibelwind, the “Zerstorer 45″ program was started, bringing a slightly larger turret to mount this: 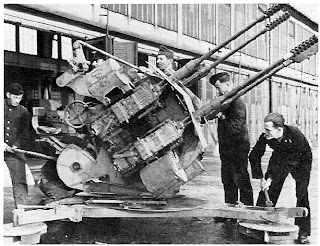 Quadruple 30mm MK 103 cannon, enough to make minced meat of even the vaunted IL-2 and most light tanks on ground. Only two of those prototypes were made but the hail of fire must have been impressive.

At the same time, Ostwind was planned to be upgraded to “zwilling” or twin, 37mm Flak 43, basically going akimbo: 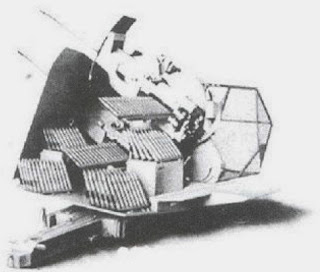 This was later on planned to be upgraded to the slightly more powerful 3.7cm flak 44. 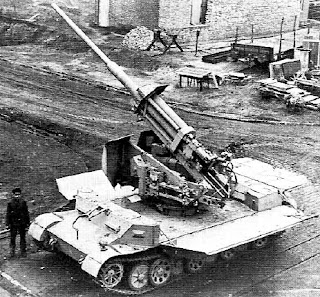 An heavier configuration was developed in 1942 based on a special Panzer IV chassis mounting the 8.8cm Flak 37 or Flak 41 in a fold-able platform that was later on proposed to be integrated first with Leopard components then with Panther ones but was ultimately discarded for more compact solutions using either 3cm MK 103 or the 5.5cm Gerat 58.

Later modifications based on Panzer 38(t) and 38(d)

As the Panzer IV was scheduled to be phased out, design moved on what was supposed to be its closest replacement, the Panzer 38(d) which could be described as looking like a turreted Hetzer redesigned to be produced in Germany.

Although not evident in the drawing, it sported two 20mm MG 151/20 cannons allegedly for ranging and two MK 103 for the kill, an impressive weapon array for such a compact design.
Later on during flak Panther development the 3.7cm flak 44 was also proposed for the Panzer 38(d).

A final modification was made on an enlarged 38(d) chassis in a waffentrager configuration, using the Gerat 58 in a twin mount.

As soon as Panther design started being finalized, flak panzers were being discussed with the very first proposals coming from Luftwaffe in 1942. 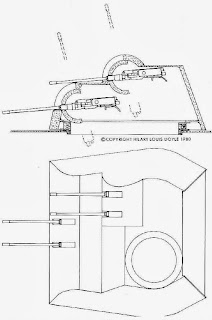 Initially a quadruple 20mm MG 151/20 configuration was proposed and trialled but while delivering an impressive barrage, it was deemed insufficient and discarded for twin 3.7cm flak 43.

This configuration, dubbed the “Coelian”, was later on upgraded to twin 3.7cm flak 44, which benefited from a longer, more powerful cartridge.

This was again upgraded in 1944 to make use of the new 5.5cm Gerat 58 still in a twin configuration.

The heaviest modification however regarded using the 8.8cm Flak 41 in an open turret, proposed in 1943 by Rheinmetall and discarded in 1944 as Panther chassis were direly needed for heavier tasts and 8.8cm cannons in fixed positions were felt more than adequate for the task.

Development of a light flak/ground support chassis by Porsche in collaboration with Rheinmetall started in 1943 as resources for heavier designs were drying up, using the 3cm MK 103, 5.5 cm MK 112 and the 10.5cm LEFH 43.
60mm frontal armor and a top speed of 58 KM/H would have made this tank double wonderfully as light scout and support, although that role would have been better covered by its enclosed turret version.

All in all, the germans developed quite a few interesting designs of varying effectiveness, especially as planes got faster and faster.
As with similar designs from other nations, the germans basically focused on sheer rate of fire for closer ranges, while using heavier guns was rapidly becoming the chosen option in later vehicles.

As analogous designs to the soviet ZSU 37 and 57 they could have lasted as anti helicopter/light ground support tanks even after the war, until being ultimately supplanted by a mix of SAM and Radar-equipped SPAAGs.