today, we are going to have a look at another tank, that is currently not available on the EU server, the A-32 – and we will attempt to answer the question: are we missing something, or it’s not worth thinking over?

A-32 is a medium tier 4 tank. According to World of Tanks wikipedia, it was a part of the light pre-order package, but even though I play the game practically ever since it came live, I don’t remember seeing a single such vehicle in battle. According to WoT Wiki, there are like 8000 of these vehicles on EU server in total, but few of them are played, you’d be very lucky to see one – and there’s a reason for that. It’s worth noting that for a while, A-32 was classified as a light tank, before moved to the medium class. 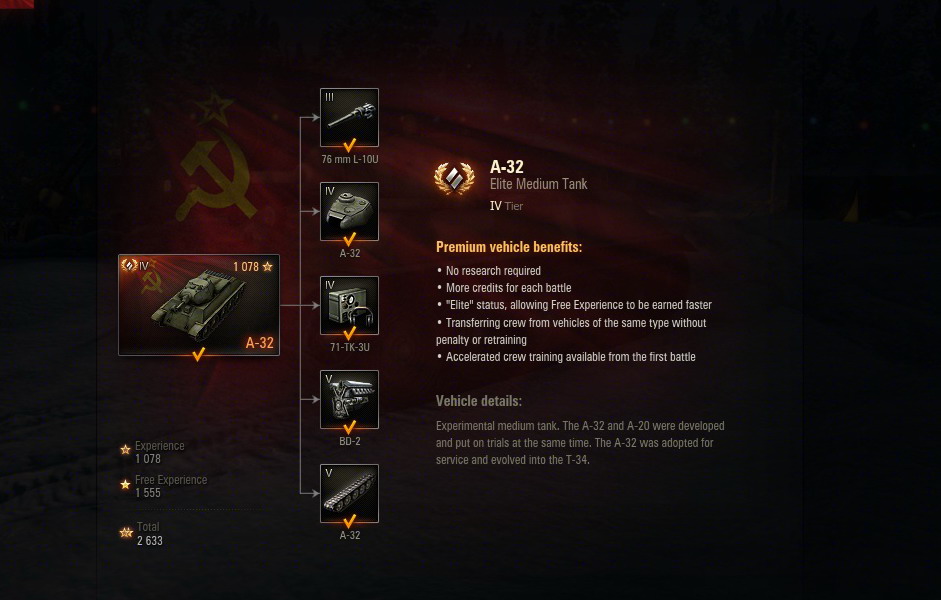 Historically, A-32 is one of the T-34 prototypes, or – rather – evolution steps. Here’s what wot-wiki writes about this vehicle:

Koshkin convinced Soviet leader Joseph Stalin to let him develop a second prototype, a more heavily armed and armoured “universal tank” which could replace both the T-26 and the BT tanks. The second prototype Koshkin named A-32, after its 32 millimetres (1.3 in) of frontal armour. It also had a 76.2 mm (3 in) gun, and the same model V-2 diesel engine. Both were tested in field trials at Kubinka in 1939, with the heavier A-32 proving to be as mobile as the A-20. A still heavier version of the A-32 with 45 millimetres (1.8 in) of front armour and wider tracks was approved for production as the T-34. Koshkin chose the name after the year 1934 when he began to formulate his ideas about the new tank, and to commemorate the decree expanding the armoured force and the appointment of Sergo Ordzhonikidze to head tank production.

With that being said, I am sure you can now see where this is going. The A-32 is basically a medium version of the A-20 with comparable handling, but worse gun. Given the fact that the A-20 is one of the least popular vehicles in the game, this does not bode well for the A-32. 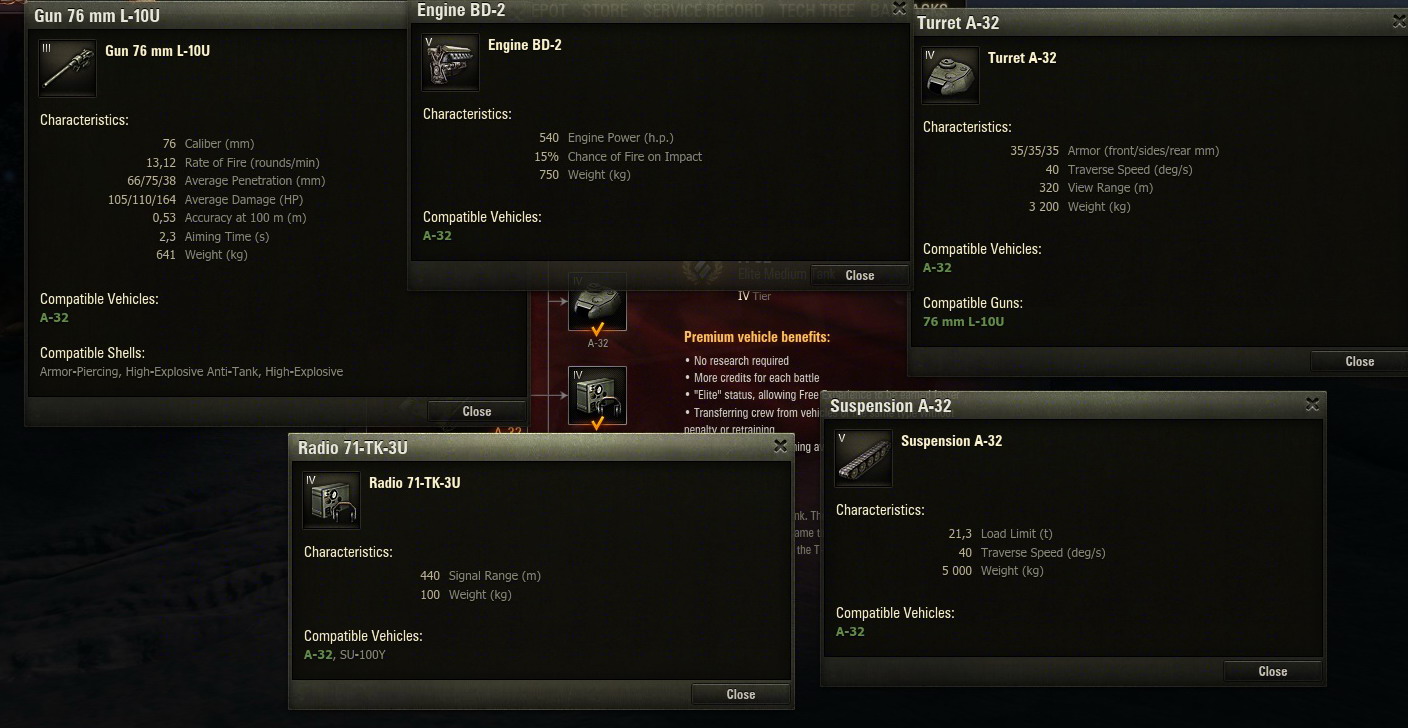 The first problem is that this is a medium tank, so it’s expected to actually fight and not scout (which is probably the only thing A-20 can do at least). For that, it is very ill-equipped. First there is the non-existant armor. Its frontal hull and turret is only 35mm thick and it actually has weakspots (not that it needs them). The only part with actual decent thickness is the mantlet, that is 35mm thick and on its edges overlaps with the turret armor (70mm total), which means it will probably occasionally bounce something, but otherwise the armor is absolutely hopeless against even tier 3 vehicles, everything will penetrate. 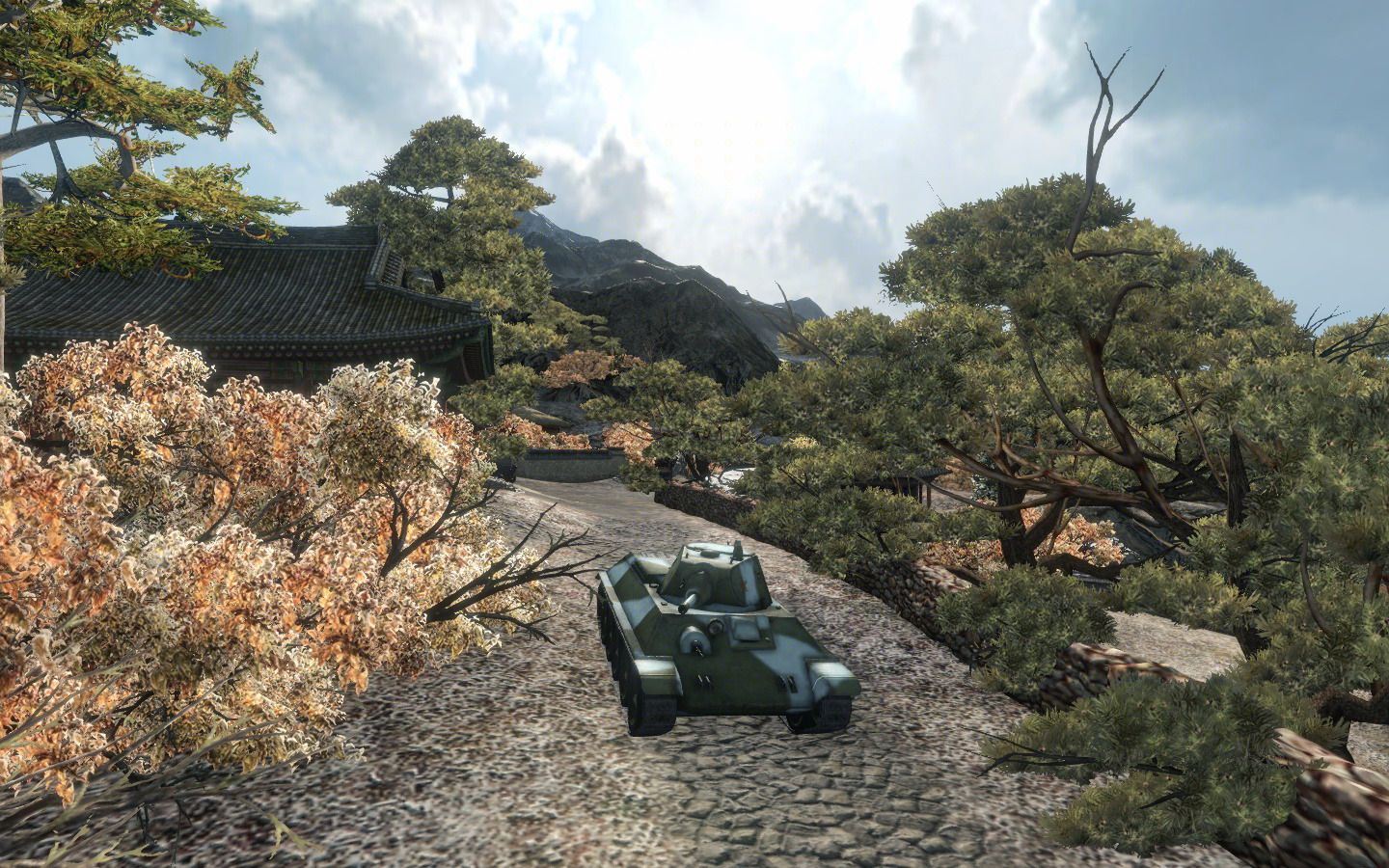 The gun is even worse. It’s the short 76mm L-10U with 66 penetration (66/75/38 – please note wotwiki has an incorrect value of 100 pen for the gold shell, it was actually nerfed) and 105 damage (110 for the golden shell). As you can see, the gold ammo performance (HEAT) is only marginally better and given the fact that you will not be able to use the main HEAT advantage (no pen loss over distance), it’s practically absolutely pointless to fire gold ammo. And it gets worse: the gun not only fires relatively slow (13,13 ROF), it has 2,3s aiming time and terrible, terrible 0,52 accuracy. The accuracy might not be SO bad, if the vehicle didn’t bleed so much of it when moving, but it does. You will LITERALLY (and I mean literally) not be able to hit anything while moving, even close targets. The gun simply fires all over the place because of the terrible accuracy on the move, a stat that is normally hidden and not so evident. In short, the gun is just terrible and useless. This vehicle does have limited MM (it cannot see tier 6 tanks), but the gun cannot defeat most of the tier 5′s and struggles even against tier 4 tanks. Hell, I had arty bouncing my shells.

The only real advantage of this tank is its blazing speed. It has a 540hp diesel engine, allowing it to go very, very fast. In seconds, you can reach the usual cruising speed of 50 km/h and even on not-so-good surfaces it’s possible to reach 60. Its maximum speed (70 km/h) is however obtainable only on hard roads or when going downhill). Although fast, the vehicle is not TOO maneuverable (forget about T-50), it’s just very fast. Good for a scout (it’s in fact faster than a lot of other scouts), not so good for a medium tank.

Poor gun and the fact this is a medium tank (eg. it has no camo bonus on the move) and MM will throw you on the top of their teams ensures one thing: you won’t be making a lot of money with it. Either you will be actually expected not to scout, but to shoot (tier 4 battles), or you will be on the bottom, completely powerless to do anything with your puny gun apart from scouting, for which all other light tanks (and at tier 5 there are still plenty of those around) are better suited, so once again you’ll be the one drawing the short straw.

As I wrote above, there is a reason noone is playing this tank. It sucks. Its value is probably only as a collectible. I don’t mind not seeing it in shop and given the fact (if the wotwiki info is correct) it was a part of a pre-order package, I doubt it will ever appear in the shop again.