this one’s on me actually – I made a pretty stupid mistake in the “Wargaming fake tanks” article and I would like to rectify it. I wrote in that article that the Jagdtiger with 128mm L/61 is a fake, because the gun was fitted in an enlarged superstructure and wouldn’t fit the regular casemate. That is not the truth – I made a mistake by confusing the 128mm L/61 and L/66. Here’s the deal.

Sometimes however, you hear about “Porsche Jagdtiger” – this was not some different proposal by Ferdinand Porsche however, it simply was a regular Jagdtiger with experimentally mounted Porsche suspension. This is how it looked (source: Spielberger):

The Porsche suspension for the Jagdtiger was an effort to reduce the man-hours, needed to actually build a Jagdtiger. According to Spielberger, ten vehicles were fitted with this suspension and successfully tested. The goal of reducing the price and man-hours was reached: the classic Henschel suspension costed 866.000,- RM and it took 360 man-hours to prepare the hull for it. The Porsche system costed 462.000,- RM, it took only 140 man-hours to complete and it was lighter too. The results of this project were satisfactory and it’s possible that in the future, more Jagdtigers would be fitted with the Porsche system, but the end of the war prevented that. Other than the suspension however, there was no difference between “Henschel Jagdtiger” and “Porsche Jagdtiger” 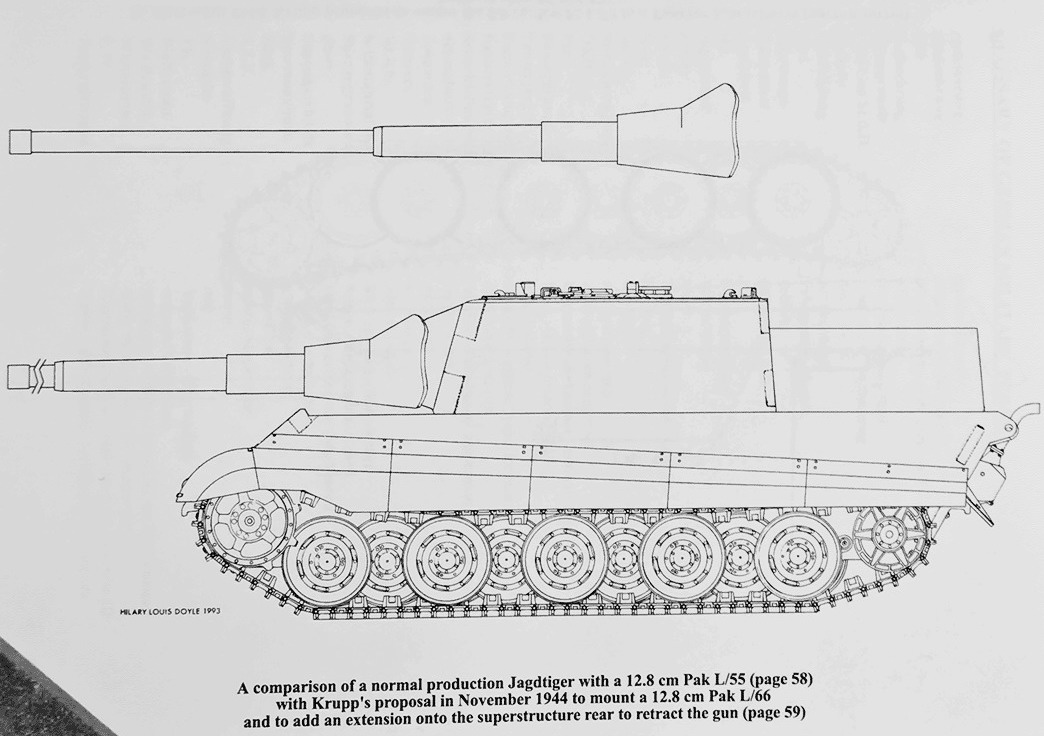 This was proposed by Krupp in November 1944, the project was refused in January 1945 as unrealistic. Basically, the gun would use the same mount as the L/55 variant, only it could not be mounted as such – it would have to be retracted before moving the vehicle, because it was too long and the Jagdtiger wouldn’t be able to move with it sticking out like that. Therefore, before moving the vehicle, it would have to be moved backwards and – vice versa – it would take time to prepare the vehicle for firing, because it would have to stop and then the crew would have to shift the gun forwards, negating Jagdtiger’s advantage as a tank destroyer – Wa Prüf 6 in fact reclassified such a vehicle as heavy artillery. It’s worth noting that even this long gun kept decent traverse (10 degrees to each side).