as I informed you several times already (including personal confirmation by WG EU’s historical expert, Challenger), current tier 10 British medium tank in the game, FV4202, is very unhistorical (armor is overbuffed, wrong gun if I recall correctly – the real life FV4202 carried only the 20pdr) and if Wargaming brought it to historical parameters, it would be like tier 8 stuff.

Naturally, there have been some thoughts by players to have it replaced by something else. Will this really happen? Who knows. But I was of course wondering, what vehicles are available to replace it (if any) and so I asked around, specifically those, who know a lot about British tanks: Listy and Xlucine. Special thanks go to Cannoneer (WG RU) for linking me some of the sources for the Action X.

Basically, we (well, they), apart from some vague ideas about uparmored Centurion variants (Xlucine’s materials, up to him to publish what we found), we found out that there are only two realistic options, each with its advantages and disadvantages. I am pretty sure that any potential replacement would be one of these two – IF Wargaming decided to implement a new vehicle at all (it’s probably also possible to separate Centurion Mk.IX from tier 9, but that would mean a lot of tree re-work and rebalancing of both tier 9 and 10 instead of just tier 10).

These candidates are the Action X Centurion and the Vickers MBT. 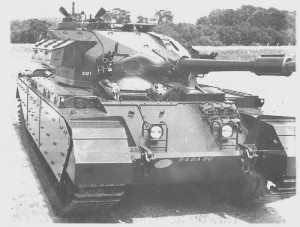 Action X Centurion was an experimental upgrade program for the Centurion tank, first mentioned in 1955. A Mk.VII hull was fitted with a new type of “mantlet-less” turret (you might see some Chieftain resemblance there) – please note that this turret (despite superficial resemblance) is NOT identical to the FV4202 turret. Although it was proposed to manufacture late model Centurions with this type of turret, the program did not progress beyond prototype stage – the prototype was later used for infantry training. The actual thicknesses are not known, but the frontal base thickness is (based on tank-net info) believed to be 200mm (as an alternative to simply adding a 75mm appliqué plate to the (already existing) 150mm thick Centurion turret front).

The main issue with this vehicle is that while the turret performance probably is sufficient for tier 10, the Action X Centurion was armed only with a 20pdr, so buffing it to 105mm will remove one unhistorical vehicle (FV4202) only to replace it with another one. The main advantage is, well, that it looks really cool.

The turret prototype actually exists (although in bad shape) at Bovington: 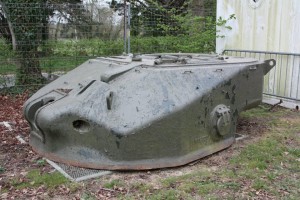 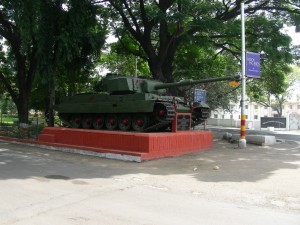 Vickers MBT was supposed to be a cheaper export tank for foreign markets, developed in early 60′s (first prototype came in 1963). Its Mk.I variant (that would fit the tier 10 slot) was actually mass-produced both in Britain and in India, with 2200 built under the Indian name “Vijayanta”, but it was also exported to other countries, such as Nigeria and Kenya. Superficially it resembles the Centurion, but it’s actually not as armored, its main purpose was to be much cheaper, while keeping its effectiveness. It was lighter (some sources state 38, others 40 tons) and it had a 535hp Leyland L60 Mk.4B engine (later upgraded to 720hp Detroit Diesel). It was armed with the 105mm L7. However, there was a price for all that: the armor was only 80mm thick in front and not too well sloped.

In game terms, the Action X turret Centurion would be something like current tier 9 Centurion, while the Vickers MBT would be a Leopard 1 clone – quite light with very thin armor, but fairly mobile. Which option would you prefer?