Author:  Vollketten (with some suggestions by Captain Nemo)

Of all the tanks in WW2 few could rivalry the sheer numbers produced, the number of front served in or the vast number of modifications carried out. Many of these modifications were on a very small scale so are not necessarily distinct or common enough to warrant a special vehicle. There is of course the battle for Okinawa for which modifications were extensive in both numbers and appearance.

Most people will have seen Shermans covered with sandbags in books or footage of the war. To cover an entire Sherman it was found to take about 170 full sandbags to cover an M4 adequately although up to 200 were used on occasion. Initially secured with wire mesh and later with welded steel brackets and was often done on a wide scale. The 14th Armored Division in Europe “systematically sandbagged their tanks prior to entering combat”. Estimate a sandbag at approximately 10kg and this adds a considerable 1.7 to 2 tonnes to the vehicle.

How effective were they? Well on the 28th July 1944 3rd Armored Group tested the effectiveness of this armour on an M4 using a Panzerfaust. As a result of the test a truck drove back to the landing beach to get more sand. (11)
In the pacific sandbags were sometimes placed on the rear deck to protect against antitank mines or satchel charges thrown onto the rear deck but overall the use of sandbags was found to improve the overall effectiveness of the vehicle armour against shaped charge warhead based weapons such as the panzerfaust but not make any noticeable difference against anti-tank guns.

Concrete was widely employed in some units often on the glacis and also in the Pacific as a layer against the sides of the tank cast against a layer of planks on the side of the tank. This was done by the Marine Corps where the planks left a void about 100mm wide against the sides which was then filled in as both a measure to improve the armour against the Japanese antitank guns but also to prevent the sticking of magnetic mines to the sides by Japanese infantry. 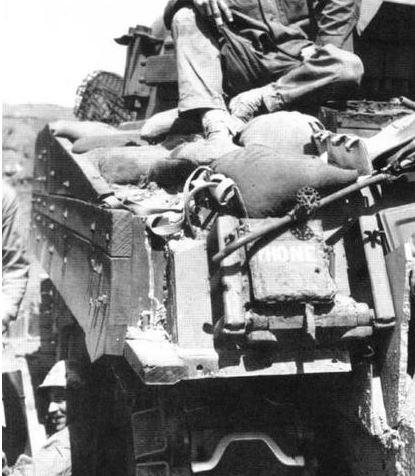 Other measures to protect against these mines included wire cages over the hatches and the US 750th Tank Battalion went so far as to put up to 150mm of concrete on their M4 tanks and even nails welded on.

Spare track sections were widely used in all theatres of the war by crews and provided some additional protection against kinetic energy weapons and a slightly greater stand-off distance for HEAT type weapons. In the Pacific the addition of steel track sections welded to the turret and sides was found to “reduce the effectiveness of the Japanese 47mm high velocity antitank guns”. These guns were a very real danger to the M4 where for example we have an account from the 193rd Tank Battalion in April 1945 where a single Japanese 47mm antitank gun knocked out 4 of the battalions medium tanks in a single day. (9)

This is ‘Agony’ still with its wading system knocked out and repeatedly penetrated by Japanese 47mm antitank rounds. 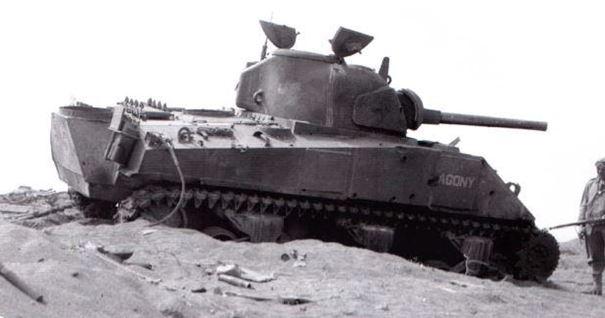 Side skirts for the M4 were at least trialled formally back in the US in 1943 copying the side skirts from the T14 Assault Tank and found to be of “dubious value in detonating APHE type shells, but that they will reduce track damage due to explosions of HE shells where those shells detonate against the skirting plates”.

Side skirts were also used on Okinawa either as fabricated steel panels like this: 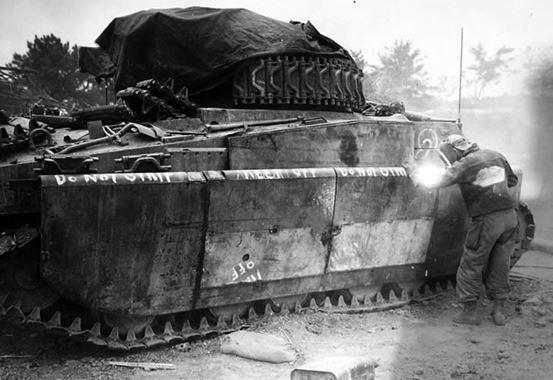 Or as wooden planks fastened to welded-on steel frames. The goal was not so much protection against anti-tank rounds but as a measure to counter the insane bravery of the Japanese soldiers who could throw or place satchel charges or Type 99 magnetic mines against the hull. 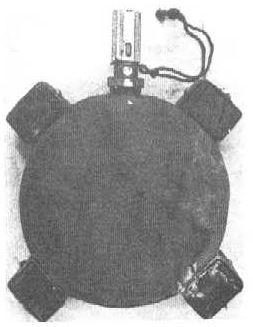 Davy Jones was knocked out and burned after being hit by 3 Japanese 77mm shells. The crew survived that incident. 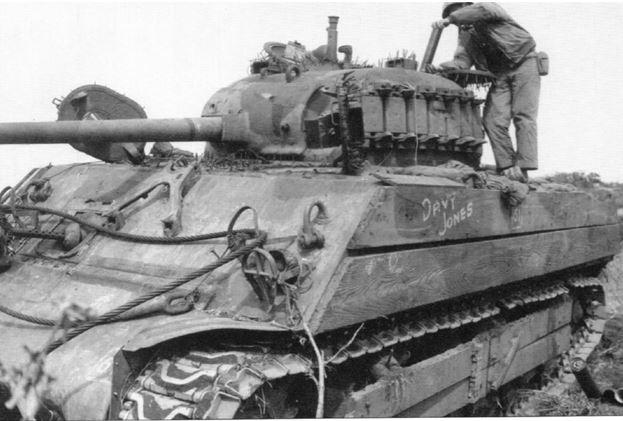 This vehicle also has two panels on either side of the glacis as well: 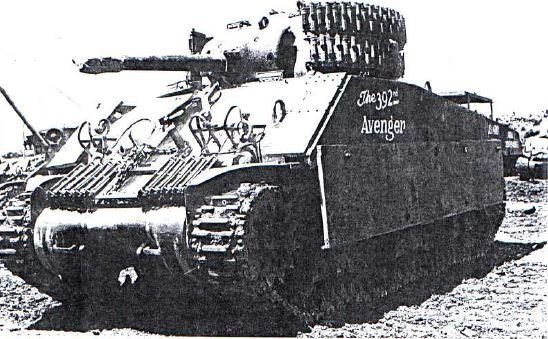 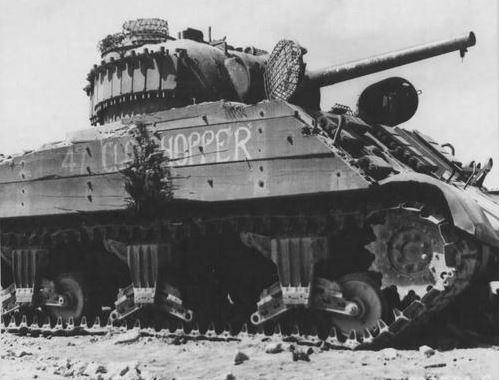 ‘Cloudhopper’ was knocked out by a 47mm AT round through the side. (8)

“Track blocks had been welded on turrets and front slope plates in the staging area. However, during the operation it became necessary to weld track on all sponsons.“ (6)
“The planking on the sides is considered to have been effective against shaped-charges thrown at several tank so equipped….the planking was splintered or blown off entirely, but the armor plate was not affected” (7)
“No case is recorded in which the wooden skirts for the suspension system saved a tank. But inasmuch as the [Japanese] have shown considerable reliance on satchel charges thrown under the tank” (7)
“The practice of welding spare track blocks on the outside of the turret and on the front slope-plate….and on at least one occasion prevented a 47mm projectile, which hit a track block on a tank turret, from penetrating the armor” (7) In this account a second vehicle hit in approximately the same place by the same type of round but without track blocks added was penetrated and exploded inside the tank. (7)

The scale and scope of modifications

Armour modifications by the 4th battalion to their M4A3 tanks were: (8)

- Additional armour plate was affixed to the front part of the right sponson on 24 tanks mounting flamethrowers.
- Forty one tanks had spare track sections welded around the turret and to the front.
- Forty seven tanks mounted a spare bogie wheel welded to the front slope plate
- Fifteen tanks has a 2 piece sections of channeled steel sheet weleded to the sponsons and a 35mm section cut to shape and bolted to the channel irons.
- Three tanks had three sections of plywood installed on their sponsons filled with about 40mm on concrete bolted to brackets welded on to the sponsons and were also considered effective.
- Six tanks had 50mm thick timber planking bolted to brackets welded to the hull sides creating a ~75mm thick gap.
- Three further tanks used 12mm thick plywood in the same manner.
- Fifty four tanks carried the wire mesh cages around all of their hatches.
- Forty five tanks had the 76mm ammunition ready box on the floor of the turret basket removed and the 76mm ready racks installed permitting the carrying of 25 more rounds of 76mm ammunition.
- Ten tanks had their commandeers cupolas rotated 45 degrees clockwise so that the hatch opened to the rear instead of to the right hand side and thus prevented branches and wires etc was becoming snagged. Report recommended this be incorporated on all tanks.
- Thirty four tanks had 25mm diameter 225mm long rods welded to the front of the hull to make towing easier.
- Fifteen tanks has wooden plugs inserted into the M3 2 inch mortar barrel to prevent grenades being put in there.
- Sixteen tanks had the commanders periscope lengthened by about 50% to give increased vision.
- Eighteen tanks had their deck escape hatches cut in two hinging it to the deck armour and secured from the inside.

The improvisations were effective.

The 5th Battalion also modified their M4’s. Sheet metal was cut into plates welded to the sides of the sponsons. Angle iron was welded to the sponsons projecting 100mm from the sides and sheet metal was bolted onto this to create a false side. Other tanks used wooden planks for the same purpose. Some tanks used planks for side skirts and other had track blocks welded to the sides of the turret. Welding nails to hatches to prevent climbing, prying open hatches and magnetic mines from sticking or creating an air gap. Aircraft matting was also rigged over hatches in the same manner. Wire mesh stretched over flat surfaces of the tanks to make grenades roll off. Filled sandbags placed on top of the engine compartment “and saved several engines during the operation”. Spare bogies carried on bustles on racks on each side. Water tanks were fastened onto the rear decks to provide drinking water for accompanying infantry. Radiators were frequently damaged so armour was welded to cover the radiator section:

Once this additional armour was welded on the deep wading equipment was attached which was sheet metal. Removal once on land was facilitated by means of cutting torch and sledgehammer:

Overall combat performance for the M4A3 “was exceptionally good” with “little engine trouble …in 35 days of operation, and the much publicized fire hazard did not materialize” (8)

So what about putting it into the game?

Well this is my impression of what it shoud look like:

Statistics wise I would have the turret armour increased at the front (to account for the appliqué panels) by 20mm with a reduction in turret traverse of 1 deg/sec. Rear mounted water tank on hull rear is just visual with no armour value. If it is modelled as spaced armour it would prevent rearward gun depression and also allow the tank to shoot itself. It’s just as reasonable for this to be omitted completely. Also on the rear deck should be visual models of sandbags.

Side hull armour has two steel sections welded onto the sides (see ‘Agony’) adding 20mm in those two sections outside of which is the concrete and wood. The hull is now 300 mm wider (100mm of concrete + 50mm of wood on each side). How to model this is complicated along with the sandbags on the rear; I would simply see the sides being modeled as spaced armour 10mm thick, 140mm* from the original hull side which basically would have no effect on AP shells but a modest effect on HE shells. The wooden planking under the tracks is visualy distinctive and would show camouflage colours but only count as 10mm spaced armour. again this would have virtually no effect on AP shells but provide a very small benefit against HE rounds. I wouldn’t propose to add the full steel side skirts on the Sherman as this was not a widespread modification.
(* except over those appliqué armour panels where they would be only 120mm from the hull)

For the rear mounted sandbags I would like them ignored as ‘armour’ and simply see them adding some hitpoints to the engine module. On the front the wide pieces of sheet metal spaced on the outer edges of the hull front should be just 10mm spaced about 50mm from the hull. Also changed would be addition of wire mesh only the hatches and the 45 degree rotation of the commanders hatch. Under the rear (you should not be getting shot here but none-the-less) added armour as shown in the photo providing 10mm of spaced armour underneath.

A final visual change would be the use of the wide grouser tracks to reflect their real use on the vehicles in these battles without additional benefits unless the owner selects that equipment for the tank. Also an increase in the ammunition capacity by 25 rounds but with the newer ammo rack to have a quite low hit point rating making it more vulnerable and a commensurate reduction in the rate of fire to account for the tighter crew space.

All told I see the Okinawa Sherman as being a good looking medium tank which would appeal to American players in particular carrying a little more armour, stronger engine, and a lot more ammunition at a price of mobility and a delicate ammo rack.