this is actually pretty entertaining. Looks like things will be not as “hot” with the Maus restoration as Wargaming would have the world believe. At first, I ran into this post in the LJ community, reprinting the Kubinka Museum VK status.

For those who do not know – VK means “Vkontakte”, it’s basically a Russian Facebook service, a social network largely used in the CIS. Kubinka has a webpage there and as you can see, it’s quite popular (over 6000 “likes”). Yesterday, a status appeared on the webpage (by then it was still accessible to outsiders and not a “closed group”, you can see that in google cache): 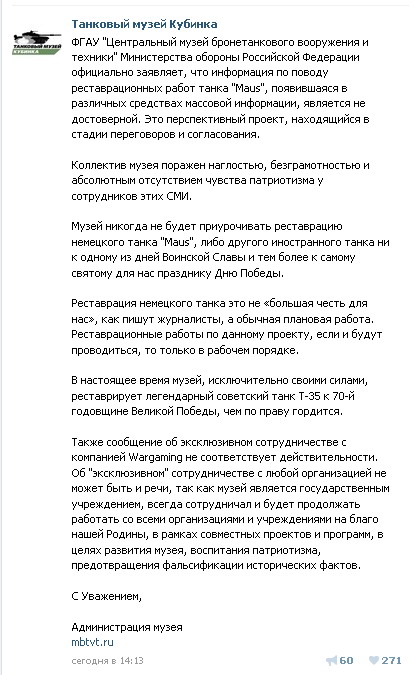 “Central Museum of Armored Vehicles” of the Ministry of Defense of Russian Federation officially states, that the information of the restoration works on the tank “Maus”, which appeared in various mass media, is not true. It’s a perspective project, which is in the state of negotiations and approval. The Museum staff is outraged by the insolence, ignorance and absolute lack of patriotism of the employees of the aforementioned mass media.

The Museum will never prioritize the restoration of the German tank “Maus”, or any foreign tank to any of the Russian military anniversaries, let alone the Day of Victory celebration, which is the most important celebration for us. The restoration of the German tank is not “a great honor for us” as the journalists write, but a simple planned work. Restoration works on this projects, if they happen at all, will be carried out following the order of work.

Currently, the Museum, exclusively on its own, restores the legendary Soviet tank T-35 to be ready for the 70th Anniversary of the Great Victory, for which we are rightfully proud.

Furthermore, the information about our exclusive partnership with company Wargaming is not true. An “exclusive” partnership with any organization is out of the question, as the Museum is a public institution, that in the past cooperated and always will cooperate with all organizations and institution for the good of our Motherland within the framework of joint projects and programs, aimed at the Museum development, patriotic education and prevention of historical facts falsification.

With kind regards
Administration of the Museum”

Shortly after this post, the group was closed for public (since this angry post got widely reposted on Russian forums and blogs) with one last message:

“Dear friends, the Museum is asking for your help with maximal spreading of the news, posted below (SS: the angry post). Thanks to the companies, that sponsor the spread of false information in mass media, the Museum loses its credibility and respect of its visitors and of all those, who follow our work. Thanks in advance! With kind regards, the group administration”

Looks like the future of the Maus restoration future is as gloomy as the proverbial Teutonic genius… if it will happen at all.