since we now have the World Cup in Brazil, we might s well look at some of the Brazilian equipment – in this case, the AA guns and halftracks.

During the second half of the 30′s, the army of Brazil (Exército Brasileiro, EB) was in the state of alert. The situation in the world was deteriorating quickly and other South American armies purchasing new and modern weapons did put the Brazilian army superiority at risk. The reports on the desk of the Brazilian chief of staff talked about Chile and Argentina both recieving modern equipment and were pointing out the fact that Brazil was ill-prepared for a sudden enemy incursion. In this hypothetical scenario, in a conflict with its southern neighbors, Brazil could withstand the pressure only for a short time and within 40 days, the southern state of Rio Grande do Sul would be lost. One of the weakest links in the Brazilian army was the near total obsolescence of its artillery. That was why General Eurico Gaspar Dutra, who was also the minister of war in Getulio Vargas’ government, created a searching committee with the task of analysing various products of European countries and looking for new armaments for the Brazilian army. 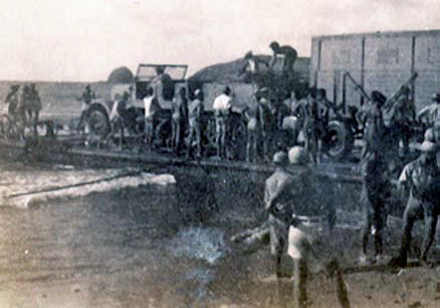 As one of the first steps, the Brazilian army, via this committee, called upon the renowned European companies, such as Schneider, Krupp, Bofors, Ansaldo and Rheinmetall to introduce and offer their products to Brazil. A relatively large budget of 1.500.000 contos-de-reis was allocated to buy new arms in next 10 years. Furthermore, Brazil signed a contract with Germany for the exchange of German military technologies for its agricultural products. On 19.3.1937, Brazil ordered 100 pieces of 75mm C/26 Krupp field guns, that went to the cavalry units, protecting the western and southern borders of the country. The issue was however that the guns were towed by horses and Brazil only had a few good roads. The guns were in the end delivered between August 1938 and February 1939 and they were split into 25 batteries.

On 25.3.1938, Brazil signed several contracts with the Germans for following items: 1180 guns, ranging from 75mm field guns to 150mm heavy howitzers by Krupp. This contract, later known as the “Big Krupp Deal”, included accessories as well, such as 644 motor vehicles, 50 trailers, Karl Zeiss optics and fire control devices and other things from companies ELAC, Krauss-Maffei, MATRA, Daimler Benz, Büssing NAG and Henschel. The sum of the entire contract was 8.281.383 British pounds.

The contract also included drawings and plans for domestic production of spare parts. In September 1939, the Second World War started however and even though at that point Brazil was not a part of it, British blockade prevented the Brazilians from importing weapons from Europe. The solution turned out to be to load the ships in Italian Genova instead of Portsmouth. The first shipment included 4 88mm AA guns, transported on a ship flying Brazilian flag.With the invasion of France, Italy entered the war as well and the British responded by a blockade of the Mediterranean sea. Therefore, the Brazilian committee, who bought the equipment in Essen, had to have it transported by rail to Lisboa in Portugal, since Portugal remained neutral. 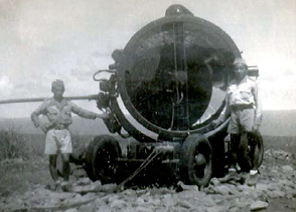 In November 1940, Brazilian ship Siqueira Campos was detained by the British forces near Gibraltar and escorted to the local port. That in turn caused a strong anti-British reaction in Brazil in the army and Eurico Gaspar Dutra, along with his chief of staff, General Pedro Aurélio de Gois Monteiro, asked the USA to intvervene. At that point, the Americans started to ship arms to Latin America as well, but it wasn’t enough, so after the personal intervention of the American chief of staff, General George Marshall, the British were forced to reload the arms shipment on an American trading vessel, which in turn delivered it first to New York and from there to Brazil. Such a thing happened once more in mid 1941, when a Brazilian ship Bagé was transporting military equipment, again from Lisboa. That was the last part of the Big Krupp Deal to ever see Brazil, the rest of the contract was confiscated by the German army. The armament (AA guns) was transferred to three AA regiments:

I/1º RAAAé was the first unit to recieve the new equipment on 4.2.1941 – it had 12 guns in 3 batteries, two acoustic devices and one battery of Sperry projectors. In October, the unit took part in live firing excercises, where two Sdkfz 7 halftracks were used as well. In 1943, the regiment also recieved a battery of American M2A2 37mm guns. Krupp’s 88mm C/56 guns remained in service until 17.11.1954, when they were replaced by the American M1 (M117) 90mm guns and the unit was renamed to 1º G Can 90 AAe (Primeiro Grupo de Canhões 90 Anti aéreos). I/2º RAAAé got equipped with two batteries with 4 Krupp guns each and with two Sdkfz 7 halftracks. During the war, the Fernando de Noronha islands were occupied by mixed Brazilian units. The islands were defended by various units, including I/2º RAAAé, whose HQ units moved to the port of Santos in May 1942. From there, it moved by ship to the islands, arriving on 13.6.1942. The ship was escorted by a cruiser Rio Grande do Sul and by two corvettes, Camocim and Caravelas. Three days after disembarking the ship, the batteries were moved to Morro do Curral under the command of colonel Henrique da Costa Neves Terra. There, they stayed until September 1944, when they were shipped back to Quintaun.

I/3º RAAAé was equipped with 8 Krupp 88mm guns and had one Sdkfz 7 halftrack. Its task was to protect the Natal area and the Pernamirim military base. One battery was near the airfield, another near Ponta de Santa Rita. On 18.12.1942, the battery fired on an unidentified submarine 2,6km away from the shore. Even though the regiment also recieved American equipment soon after, the Krupp C/56 Model 18 guns were active until mid 50′s, because they were simply better than their American counterparts. Sdkfz 7 career was considerably shorter, they were replaced soon by various lend-lease equipment.

3 thoughts on “Early Wartime Deal between Brazil and Germany”