the war in Vietnam is not exactly known as a tank war, but that doesn’t mean tanks saw no action in this conflict. One of the best regarded vehicles in this matter were the Australian Centurion tanks and today, we’re going to talk about them a bit. 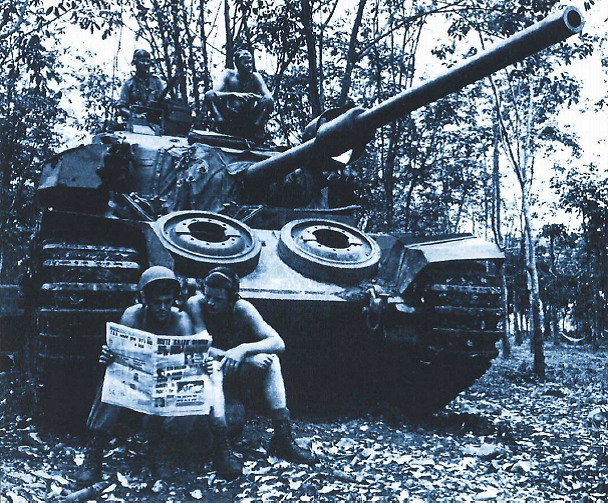 Australia, as a country not that distant from the (back then) turbulent south-east Asia, was very interested in the events happening in the region, especially during the Vietnam war and ever since the war started, it participated actively in it. From summer 1965, Australia sent an infantry batallion to Vietnam, increasing its size to a full brigade in 1966. Australian M113 APC’s also participated in the fighting, but their poor firepower and thin armor did not allow the Australians to use them in the thickest fighting. That’s why in September 1967, the Australian government decided they would reinforce the Australian forces in Vietnam with a Centurion tank unit. This caused a wave of criticism, as the military experts proclaimed that in the thick jungle terrain of Vietnam, the tanks would be all but useless and they would become mobile pillboxes at best. There was also this notion in Australia that the Centurions are “untouchable” – they were locally nicknamed “koala”, because this animal too was rare and not allowed to export.

The Australian Mk.5 Centurion tanks were ordered as early as in 1954 as a part of the 6/FV/12738 contract. They were built by the Royal Ordnance Factory in Leeds and were delivered in the beginning of 1960. Before they were sent to Vietnam, the Centurions were modified by the 4th Base Workshops in Bandianna based on the experiences of American tankers. Specifically:

Centurions with such modification recieved the designation of Centurion Mk.5/1 (Australian).

The only unit sent to Vietnam was the C Squadron of the 1st Armored Regiment, consisting of 2 tanks in command platoon, 2 Centurion ARV Mk.2 tanks, two Centurion AVLB bridgelayer tanks and three reserve regular Centurions. All these vehicles were loaded on SS Japerit in Sydney and reached Vu Tang on 24.2.1968. After short training with infantry, they participated in March 1968 in their first combat operation, called “Pinaroo”. Its task was to destroy strong Vietcong units, occupying the badly accessible Long Hai mountain range, south from the main Australian forces base in Nui Dat. During the three week operation, the tanks proved themselves to be very good at destroying enemy positions. These positions were very well placed and only direct tank gun fire could destroy them at the distance of several hundred meters. The remaining positions that weren’t blasted away were crushed under the tracks of the 50 ton beasts. 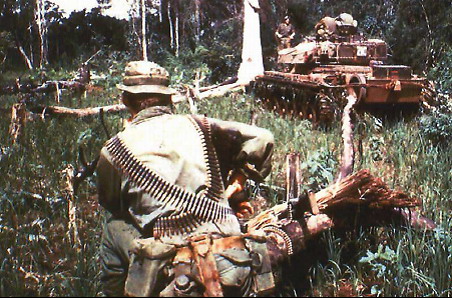 The real trial by fire for the Centurion crews came in May 1968 during the Thoang Thang operation in the Bien Hoa province during the fighting for the Coral and Balmoral bases. The latter base was attacked on 28.5.1968 by an entire regiment of the North-Vietnamese army and only the fire barrage and cover provided by the tanks prevented the Vietnamese from penetrating the base. On the very same day, the C1 company of the RAR batallion clashed with a North-Vietnamese batallion in deep jungle. The jungle was so thick that the M113 APC’s were not even able to turn around and the Centurions were called to relieve them. Much to the dismay of the Australian soldiers, it turned out that after the day of heavy fighting, only one Centurion (commanded by Lt.Gerry McCormack)and one ARV are combat-ready. The Centurions started to advance through the thick green and after several dozen minutes, they arrived at the site of the clash. Their slow advance through the jungle made way for the M113′s and allowed them to maneuver. After that, they roamed the area for 40 minutes, blasting enemy positions one after another, allowing to collect evacuate the wounded and survivors. After the Thoang Thang operation ended, the Australian units returned to the Phuoc Vinh province and proceeded with scouring it clean of communist forces. The terrain was relatively flat and hard, allowing the Australians to heavily use their mechanized forces, including tanks.

In September 1968, the amount of Centurions in Vietnam was increased to 28 and they were now split into 5 escadrons. During the combat operations the tanks were used as mobile battering rams, moving at the front of the units, using their massive weight to make way for the M113 APC’s and the infantry through the jungle. They also were useful in detonating anti-personell mines. The tracks and mudguards however suffered a lot in the difficult terrain and so the smoke grenade launchers and mudguards were removed altogether. Because the tanks cooperated with infantry a lot, the engineers welded special handles on the engine deck, that allowed the tank to carry several large water canisters. 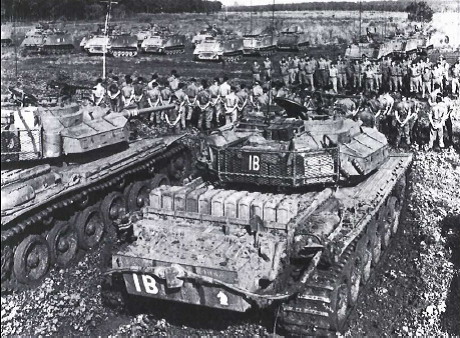 The turret also had special holders for the .30cal machinegun ammo on the outside (the MG was extensively used to fight infantry at short distances) and there was also the room for an American AN/PRC-25 radio, used by infantry to communicate with tanks, because the British B-47 tank radio was not compatible. The tanks prowled the jungle with minimal speeds, sometimes they advanced as little as 500 meters per hour due to the thick flora – this caused extreme fuel consumption, which jumped to 12 gallons per mile (cca 2800 liters per 100 km), which is why the planes had to bring in very high amounts of fuel in giant rubber 4500 liter tanks (the crews however had to pump the fuel from the tanks to their vehicles manually).

Despite the initial Australian worries, the Centurions have proved themselves to be very useful on the battlefield of Vietnam and they also turned out to be very resilient when taking damage, withstanding multiple shell hits. For example, during the several hour fight for the fortified village of Binh Ba on 6.6.1969, all the Centurions present were hit (three were seriously damaged), but they all fought to the end, despite the six crewmembers being wounded in combat. The worst enemy of the Australian and American tanks in Vietnam however were mines, causing over 70 percent of all the losses incurred. Even so, a regular Chinese anti-tank mine could only destroy the tracks and one part of the suspension, a damage that could be fixed in several hours. Vietcong however also used leftover artillery shells and aircraft bombs to knock out armor and not even a tank can withstand an explosion of such a “mine” (luckily, only one Centurion was destroyed this way). The Australian Centurions fought in Vietnam until September 1971, when the Australian units were pulled out of the country. They influenced the fighting in the Phuoc Tuy province a lot and the Australian “diggers” remember them fondly to this day.

27 thoughts on “Australian Centurions in ‘Nam”