today, we have another guest article, this time about a very interesting research the author conducted into the M29C Weasel armed with a 37mm gun. Enjoy! 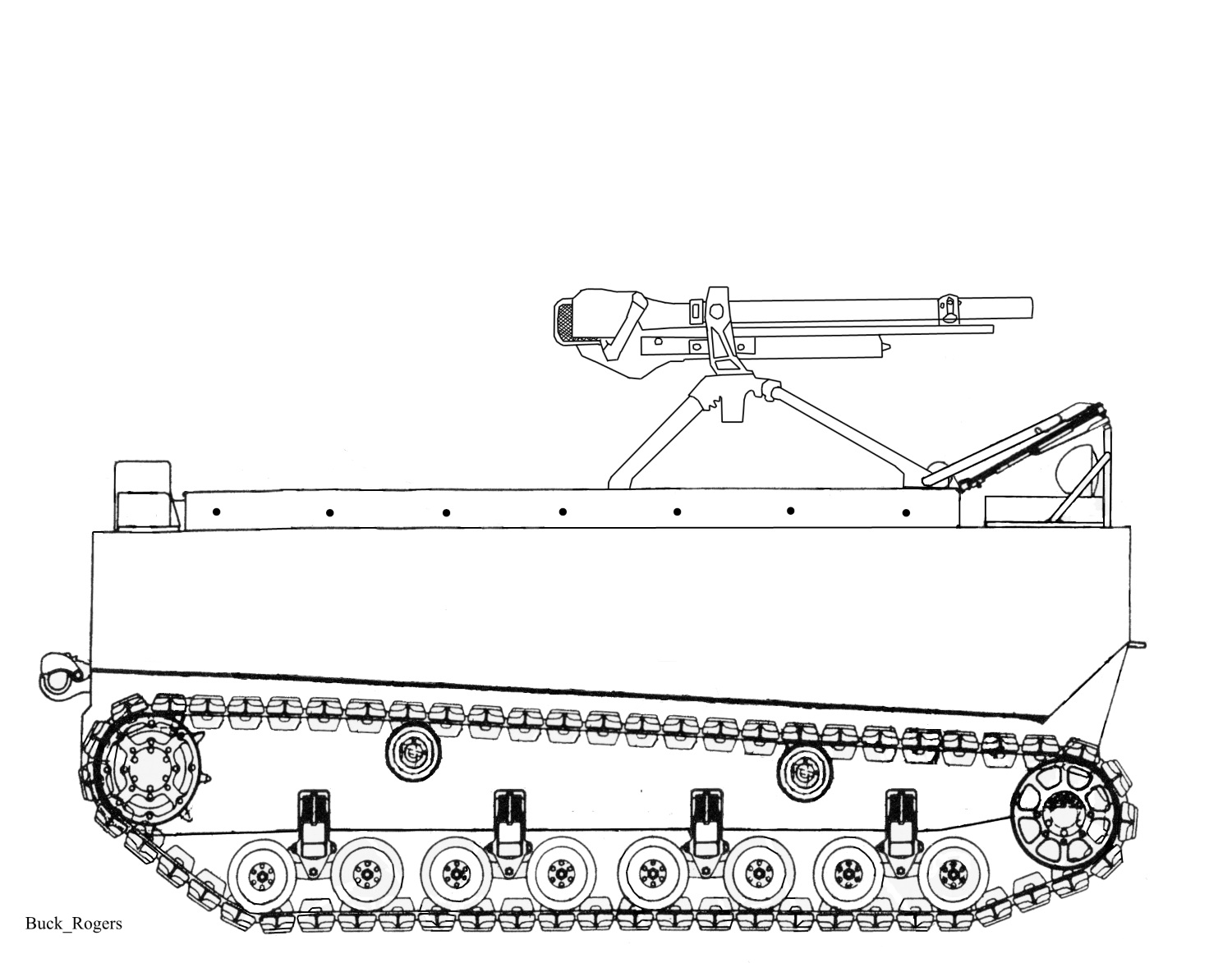 The T32 Weasel was a light self propelled gun tested at Aberdeen Proving Grounds in July 1945. It featured a 37-mm gun T32 on a quadrupod mounted over the engine bay of an M29C Weasel. The gun itself featured a new top carriage, and the Weasel incorporated various detail changes such as the addition of 37mm shell racks against the back center bulkhead. Only one vehicle is known to have been tested. This vehicle also tested the 75mm T21 and 57mm T15E9 (later M18) recoilless rifles. The quadrupod could also mount the M2 .50-cal.

You may come across references to Weasels mounting various 37mm guns. These are all erroneous and are in fact referencing this vehicle. This confusion arises from the near total obscurity of the 37mm T32. 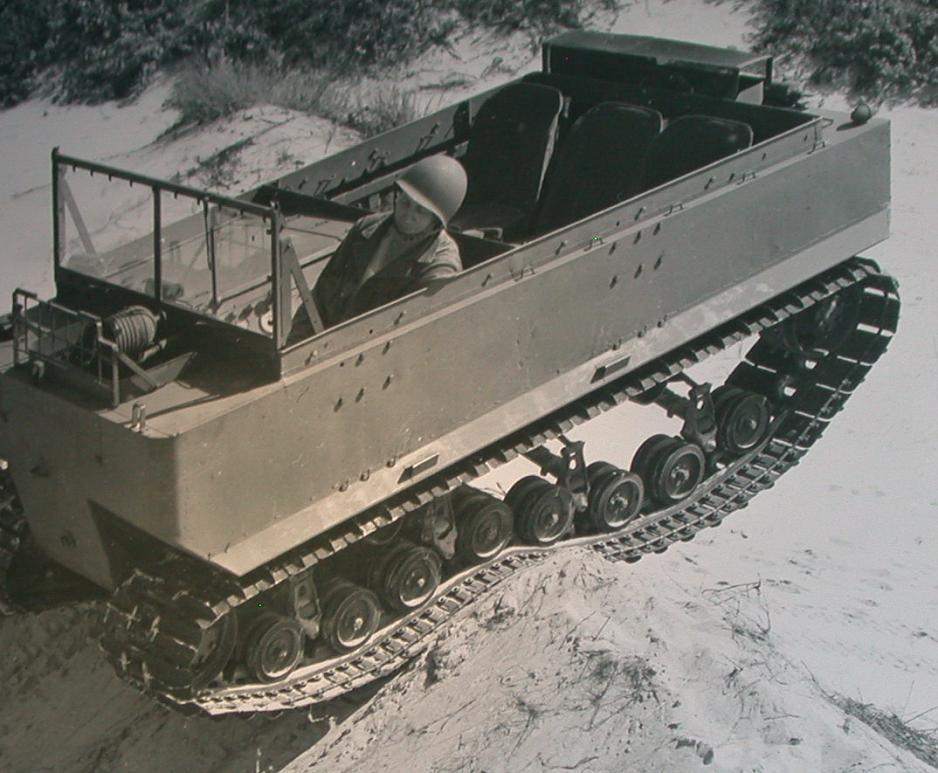 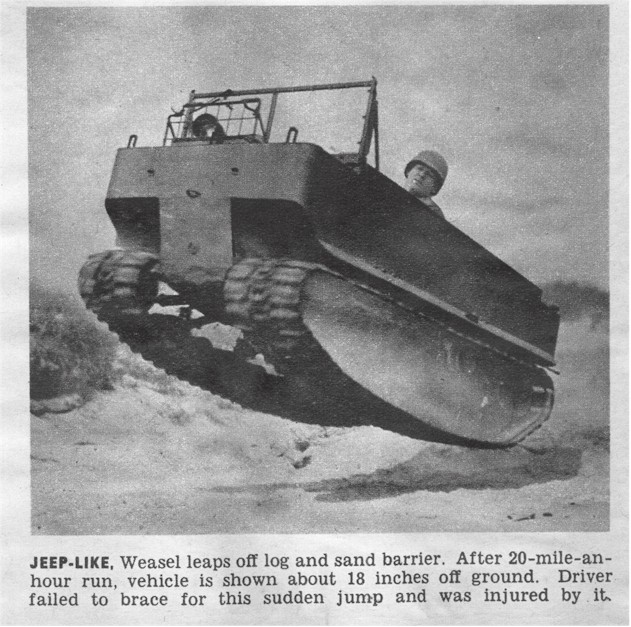 The Weasel was designed as part of “Project Plow” in 1942, a planned commando raid against Norwegian hydro electric plants used by the Germans to produce heavy water for their atomic bomb research. You could spin this to say that the Weasel was designed specifically to keep Hitler from developing atomic weapons, a purpose perhaps unrivaled in the anals of military vehicle history. However, in any event, Project Plow was abandoned and the Weasel saw service of a more conventional nature from Alaska to the Pacific, to D-Day, and beyond. 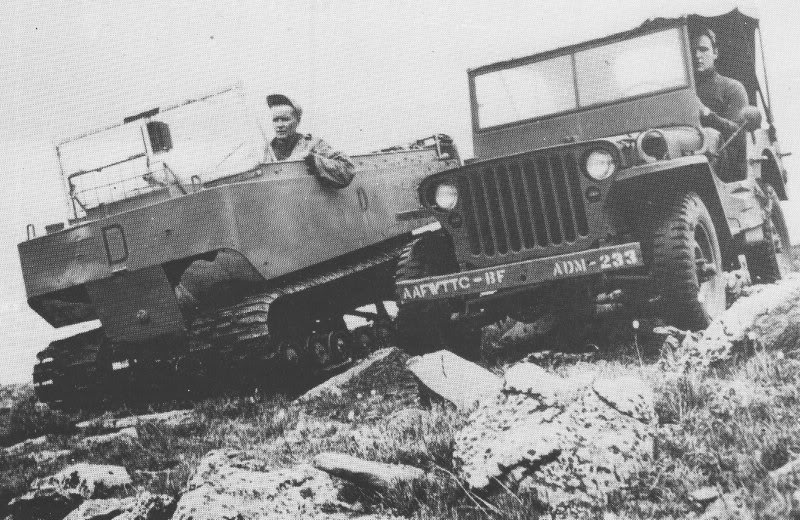 It was a compact jeep-sized fully tracked off road cargo carrier with very low ground pressure and a useful load of 933 lbs. Early prototypes were tested in parachute drops and flown in Waco gliders. Later the Weasel would be used in amphibious assaults where it could be landed by Higgins boats or LVT-4s, among others. 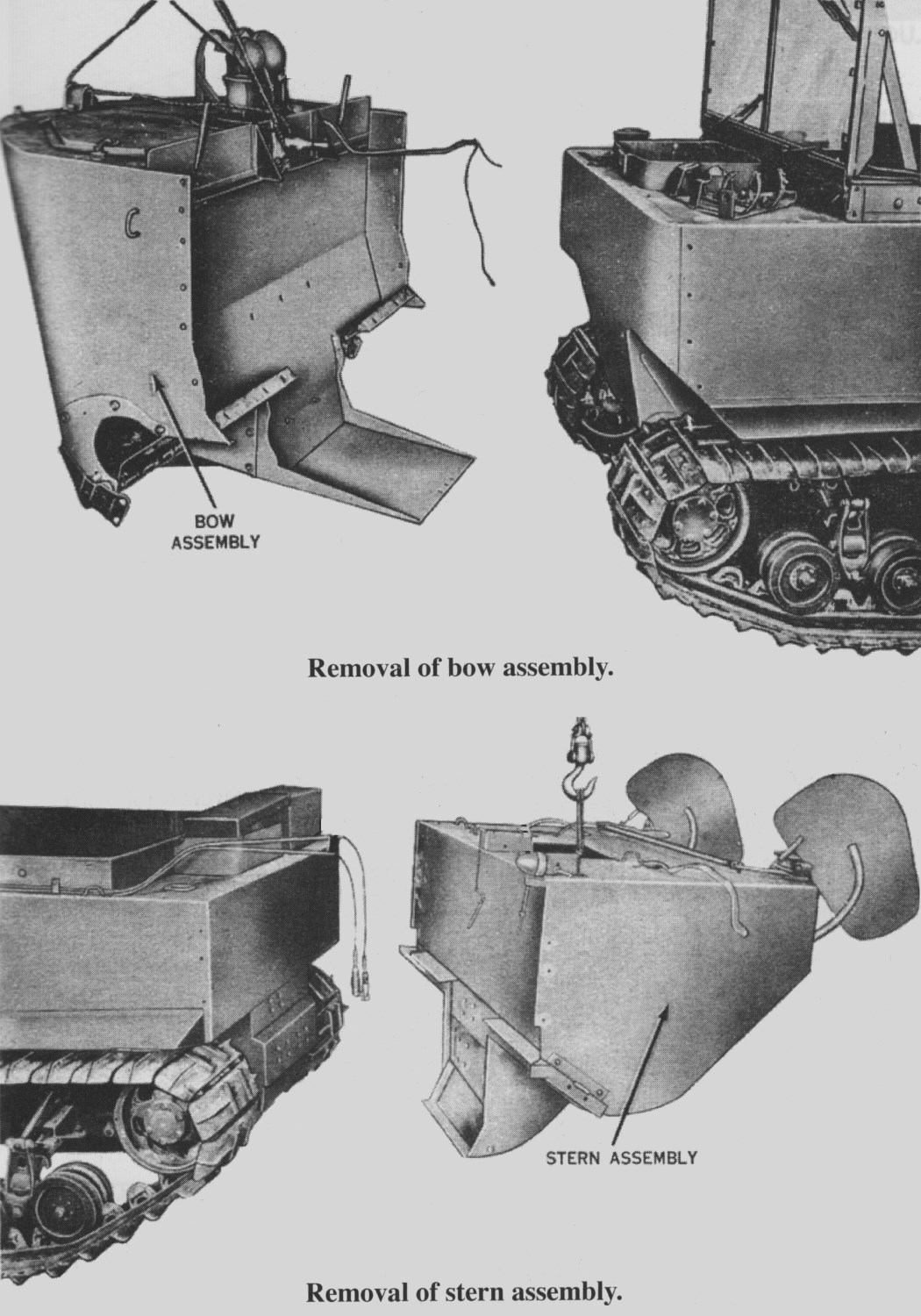 There were two primary Weasel types. The M29, and the M29C. These vehicles were mechanically identical, the most prominent difference being the bolt-on float tanks of the M29C. A late production M29 could be converted in the field to an M29C, and vise versa.

The M29 had a water tight hull. With a light load, calm water, and a little luck, the M29 Weasel is said to float. However it was not considered amphibious. That distinction belongs to the M29C, with the float kit. It should be noted that even the M29C was restricted to absolutely calm protected water, and was not surf capable. One wonders if the regular M29 could have floated in anything but artificial and extremely specific circumstances.

The Weasel saw its first major combat during the Battle of Iwo Jima where it initially served as prime mover for the 37mm M3 AT guns. In an effort to bring more guns onto the beach faster, M3 guns were carried on top of the Weasels in the landing craft (likely LVT-4s), allowing for more firepower brought ashore at a time. After the initial landings, it was discovered the Weasel was the only vehicle that could easily traverse the perilous black sands. While Shermans, Jeeps, half tracks, and Amtanks were getting stuck, the Weasel resupplied troops and rushed wounded back to the beach. The Weasel, with its ability to travel over difficult terrain, became the favored vehicle for evacuating the wounded. Casualties would likely have been higher on Iwo Jima if not for the Weasel.

The incredible terrain passability of the Weasel came to be relied on throughout the Pacific.

The Weasel participated in the D-Day landings, and a Weasel nicknamed “Barge With A Charge” is said to be the very first allied vehicle to land on the beach during D-Day. 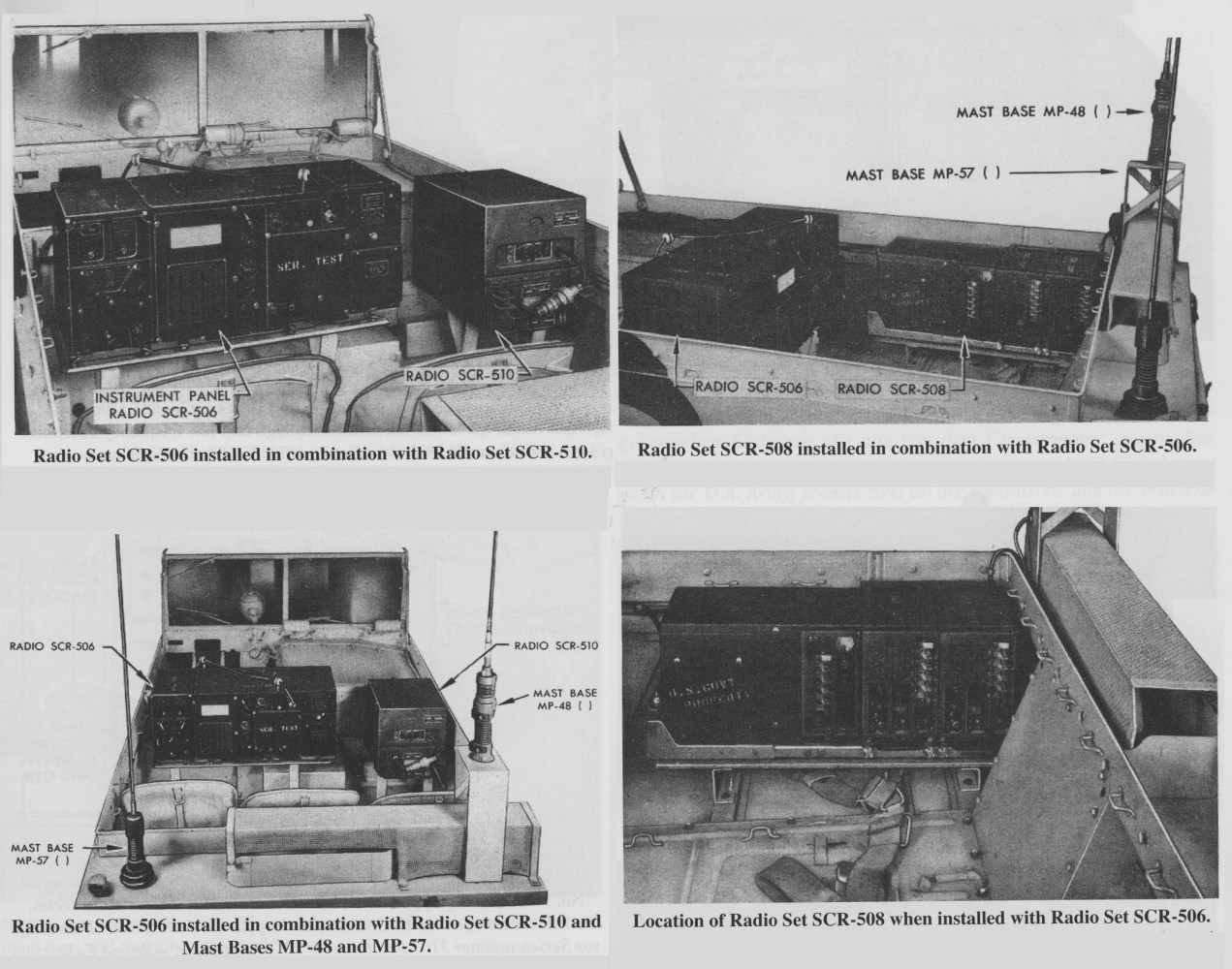 The Weasel would often serve as a command vehicle and could mount any common military radio set from the SCR 506 to the British Wireless Set No.19.

After the war the Weasel continued to see service, most notably with the French in Indochina which used their slightly modified M29C “Crabe” vehicles in everything from scouting to fire support with recoilless rifles. 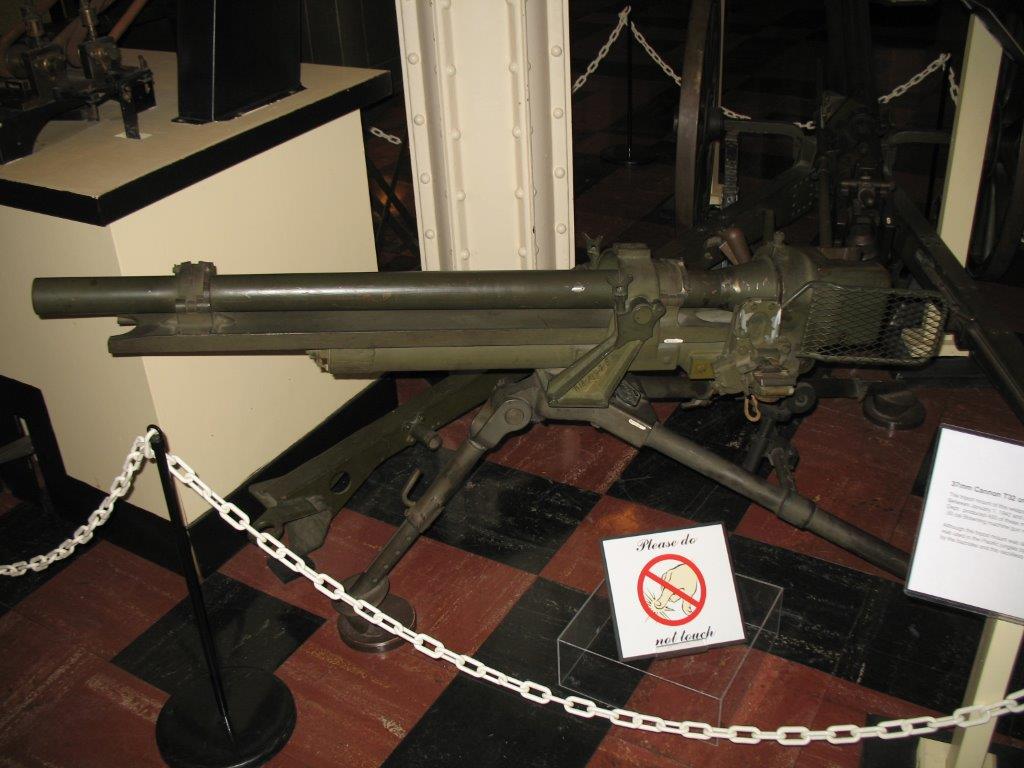 The T32 arose from the 1943 Jungle Warfare Program which aimed to design weapons especially suited for jungle use.

During the Battle of Guadalcanal US forces were still using a few 37mm M1916 guns, the US version of the French mle.1916/SA 18. These had been reworked in the 1930s as an anti-tank gun firing the HE Mk II projectile which could penetrate 19mm of armor. While the French were developing new and exotic high velocity AP ammo for their old mle.1916/SA 18 guns, the USA had decided to go the HE-only route.

The T32 could be thought of as the spiritual successor to the M1916. It was made even more portable by being a 250lb pack-gun. That is, it could break down into four loads to be carried forward by the infantry.

It was essentially a heavily modified M3 with the same manual breech. Likely to capitalize on available stores, it used the 37x145R shell from the 37mm M4 aircraft cannon, but the heavier projectiles from the 37mm M3 AT gun. The T32 was issued M63 HE and M2 Cannister “giant shotgun shell” rounds. It could fire the M63 HE at 1500 ft/s to a max range of 2,500 yards.

Its T9 tripod was simply a modified M3 .50-cal tripod, which must have made the T32 rather exciting to shoot.

While occasionally described in weapons lists as a “37mm Field Anti-Tank Gun”, this weapon was never issued any AP ammo. Like the M1916 AT gun, the T32 would have fired only HE in the anti-tank role.

It is interesting to note that the 37mm M3 also fired the M1916′s HE Mk II projectile. Futhermore, the 37mm M4 aircraft cannon used its own projectiles solely because the action would not accept the longer projectiles from the M3. So while the T32 was not issued an AP round, the weapon would almost certainly have been capable of firing all available projectiles for both the M3, M4, and even the high velocity French AP projectiles for the mle.1916/SA 18. The effectiveness of any of these AP projectiles in a weapon with a designed velocity of 1500 ft/s is debatable, but it’s interesting to think about.

On a related but separate tangent, the 37mm Recoilless Rifle T62 designed in July 1945 and test fired in May 1946 utilized the M54 and M63 high explosive projectiles from the M4 aircraft cannon and M3 anti tank gun, respectively. This further showcases the interoperability of these projectiles and the interest in using available stock in new weapons systems.

The 37mm Gun T32 and Tripod Mount T9 had a maximum elevation of 12 degrees, a maximum depression of 5 degrees, and a traverse of 17 degrees left or right. However, the T32 Weasel appears to feature a redesigned top carriage that would have permitted gun depression of around 10 degrees. I will note that the elevation screw does not appear to be lengthened to take advantage of this however.

450 T32 guns were produced between September 1944 and April 1945. By July 1944 155 guns had been sent to the Central Pacific area. It would later be used by the 10th Mountain Division attached to the US 5th Army during the 1945 Italian campaign. The T32 was issued under the proviso that further development would depend on what users thought of it. By June 1945 the procurement authority for the T32 was cancelled because there had been no theatre requests for extra consignments. Apparently the weapon was not well received, and the project was terminated in September 1945.

One may wonder why the T32 was not well received, and why it has faded into near total obscurity. The T32 was a weapons system that may have been very useful in 1942, but it was hopelessly obsolete by 1945. By July 1945 the 57mm T15 recoilless rifle was being issued in the Pacific theatre. Troops would have to choose between a 37mm 250lb pack gun or 57mm 44lb shoulder fired “pocket artillery” as the 57mm T15 was fondly called. It’s easy to see why the 57mm RR became a troop favorite, and few have ever heard of the 37mm T32.

Today the Weasel is a fairly common vehicle and can still be found in running order all over the world. At least two copies of the 37mm T32 and mount T9 survive, one of which is in the Rock Island Arsenal Museum. Rock Island Arsenal had manufactured the T9 tripod.

I see only one bump in the road for the T32 Weasel being viable for WoT. The gun was never issued AP ammo, and the 37mm M63 HE has a penetration of only 19mm in WoT.

The decision to go HE-only was likely army doctrine at the time. Most Japanese tanks likely to be encountered had very thin armor and HE projectiles were more favored in jungle fighting. 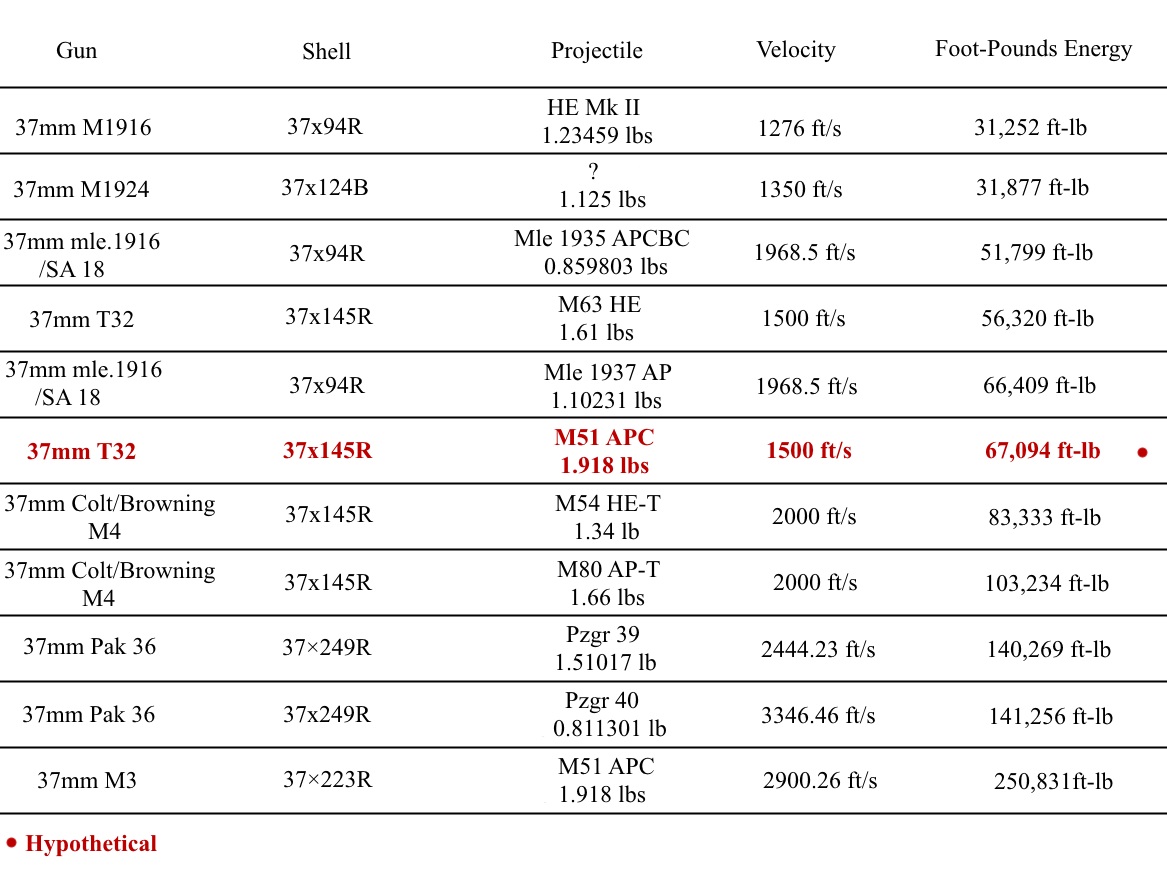 But that’s not to say the T32 couldn’t have fired an effective AP projectile. As stated earlier, the T32 would have been capable of firing any number of available 37mm projectiles. As we can see, the T32 produced similar energy to the very hottest mle.1916/SA 18 rounds, and far more energy than 37mm M1924, but not as much as the 37mm Browning and far less than the Pak 37 and M3.

So what would the AP/APC/HE average penetration stats look like? Well that’s complicated, because the M1916/SA 18 has less penetration in WoT than the M1924, which I do not believe was the case. The Mle 1935 and Mle 1937 shells for the SA 18 were vastly more powerful than their old WWI counterparts and were designed much later than the M1924.

The T32 might have been obsolete by 1945, but it would be very servicable at Tier II. Furthermore, an AP/APC/HE shell lineup, while not “historically accurate”, would be “historically possible”.

Zero armor. Anything can kill you.
Regardless of balance, the gun would be pretty wimpy.
Shells cannot reliably pen T18 casemate armor.
Gun could be more innacurate than other M3/PAK37 guns.

The complete research on this vehicle can be found here