yesterday, I wrote about how to fix Panzer 35t and today, we are going to have a look at Panzer 38t, which is even more fucked up than the 35t. Well, let’s have a look at this mess. 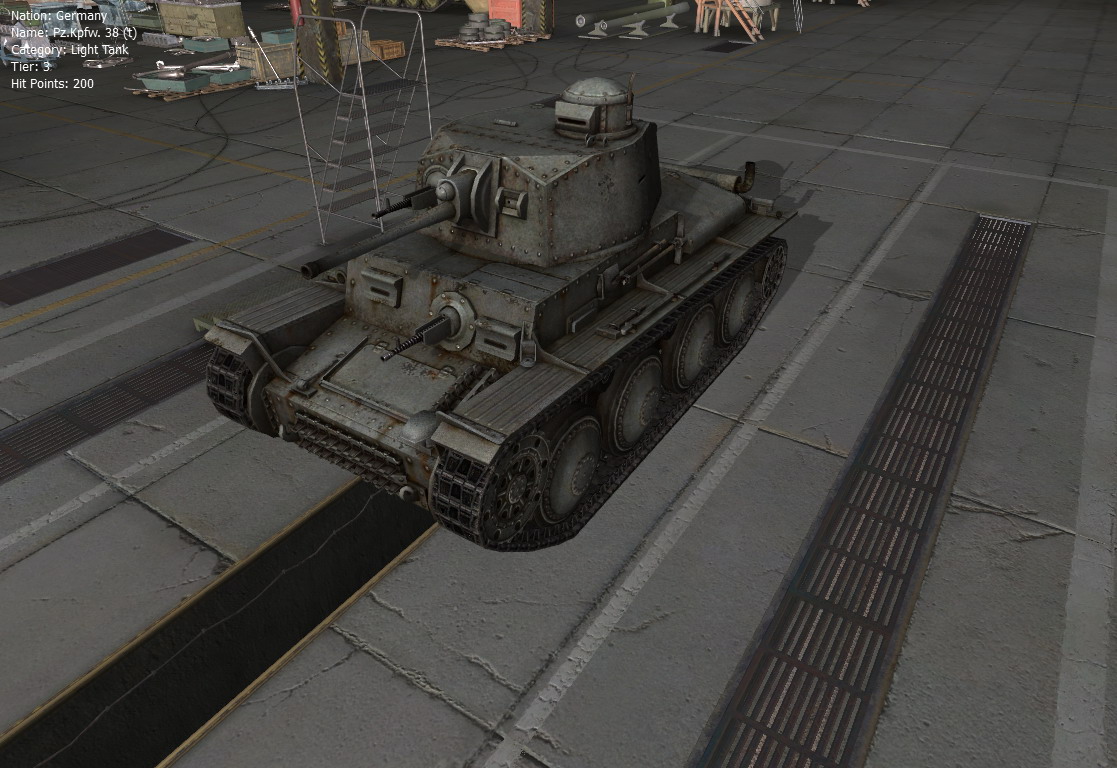 As you probably know, Panzer 38t is the Czechoslovak LT Vz.38 light tank, pressed into German service. LT Vz.38 was undisputably the best early war light tank in the world and it was no wonder the Germans were just dying to get their hands on it. Czechoslovak stocks and production of these vehicles helped the Germans to conquer Poland and France, but by late 1941, facing the superior Soviet medium tanks, they were already obsolete. The vehicle was thus moved to second-line service, sold to Germany’s allies or converted to various tank destroyer and SPG desings, including the famous Jagdpanzer 38t.

So, what’s wrong with it in the game? Well… several things:

- for one, the stock turret is completely wrong (I’ll get to that)
- two out of three guns are unhistorical
- the engines are problematic (to put it mildly)
- the armor is wrong (the hull and elite turret visual model belong to a late variant of Panzer 38t, the armor belongs to early variant)

Now, let’s talk about the turret first, because that’s probably the worst abomination. You see, the stock turret (displayed above) belongs to a tank called LT Vz.40 (it’s called LT-40 in the game, which was the protectorate designation). It’s important to realize that this tank is one of the oldest vehicles in the game. It was there practically from the start if I remember correctly and thus wasn’t touched for a very, very long time.

Back then, noone apparently gave a damn about historical realism, they just mashed stuff together and did let players play them. I have no idea why (I mean, at that point, plenty of data was available on Panzer 38t – Soviets studied it extensively and I know Yuri Pasholok, WG’s chief historian, knows Aleksey Kalinin, who is a specialist on this vehicle and even wrote a book about it in Russian).

Now, things are different, in fact, the new vehicles are (thanks to some very dedicated developers) studied extensively to be as historically accurate as possible (well, excluding brain farts like WT E-100, but apparently, this vehicle caused some confusion at WG and noone is sure who the hell wanted it like this in first place). But, back then, they didn’t give a damn.

With that in mind, we gotta dig a bit into the history of Praga tanks. There are two distinctive branches of different tanks:

As the name suggests, “export tanks” were meant for exactly that – export. There were many variants (and designations), it’s a very confusing thing, but suffice to say, it’s a separate development branch, ending with the LT Vz.40 (which was also called LTS – “light tank, Slovakia”). To make matters even more confusing, there was also a LT Vz.38 variant for Slovakia but let’s not get into that for now.

So, what Wargaming did was – they took an “export tank” turret and put it on the Panzer 38t chassis. Why did they pick this turret exactly? I have absolutely no idea and apparently, neither does Wargaming. Why pick the wrong turret when there are shitloads of others available? Who knows. In any case, the stock turret has to go (and, as far as I know, it is planned to replace it with a regular early Panzer 38t turret, probably Ausf.A/B with 25/15/15 armor). It’s also possible to name the early turret as LTM.38 (that’s how the Germans called Panzer 38t until January 1940 or so – it’s a literal translation of the Czechoslovak name: Lehký Tank Vz.38 – leichter Panzer LT Muster 1938), but that’s just details. Panzer 38t Ausf.A/B is okay.

Of the three guns, the only historical gun of the vehicle is the 37mm one. As far as I know, upgrade to 47mm A9 (that’s the top one) was not even planned. Strangely enough, the 47mm gun has practically totally historical properties, a strange thing compared to the rest of the mess. The problem is of course, we can’t have a lowtier tank with only one gun, so if we throw out the 20mm (who uses that shit anyway), you will still have the 47mm left. Yes, there were actually some changes to the weaponry of the LT Vz.38, but those cannot be likely used:

- the first was a Soviet one, where the Soviets replaced the main gun with their own 45mm 20K Model 1932/34. The Soviets actually really liked the tank (they called it simply “Praga”), but of course that is a Soviet conversion and has nothing to do with Wehrmacht.
- some post-war upgrade (up to 47mm autoloaded), but that’s Purely Czechoslovak stuff.

Not many options here, the 47mm will thus likely stay (I’d still throw out the 20mm).

The Model and Armor

This is how the vehicle looks in the game (elite, with 37mm – the “historical” look) 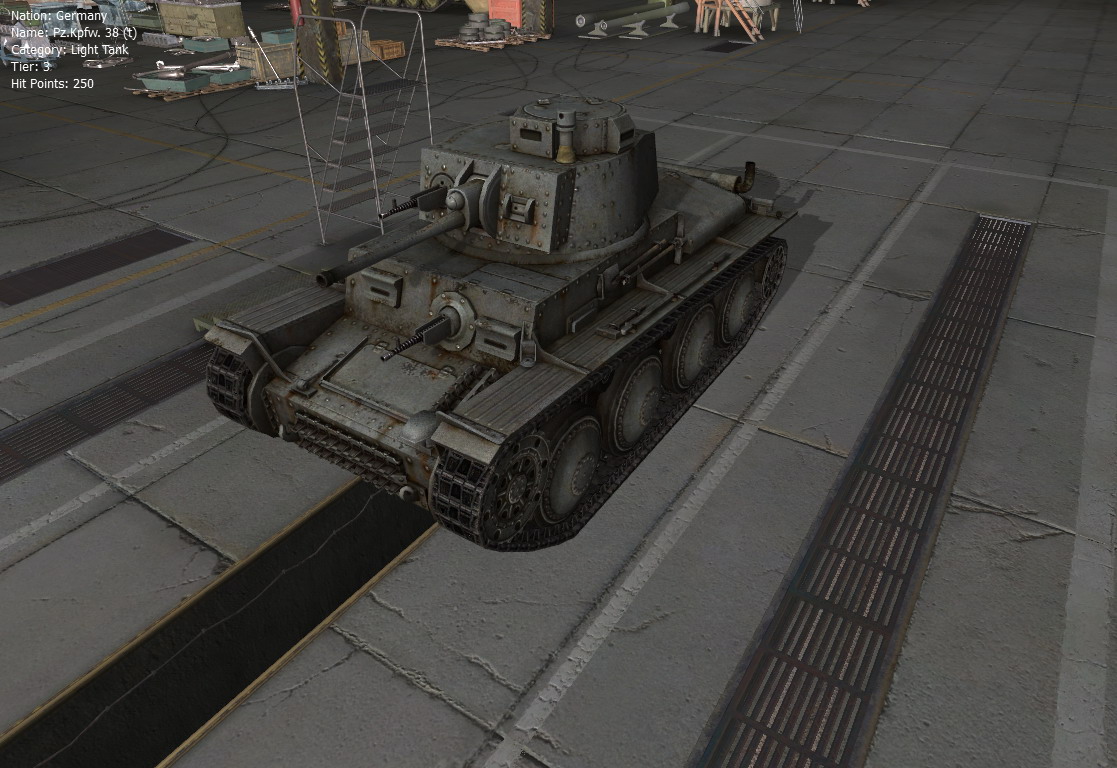 And this is its armor model 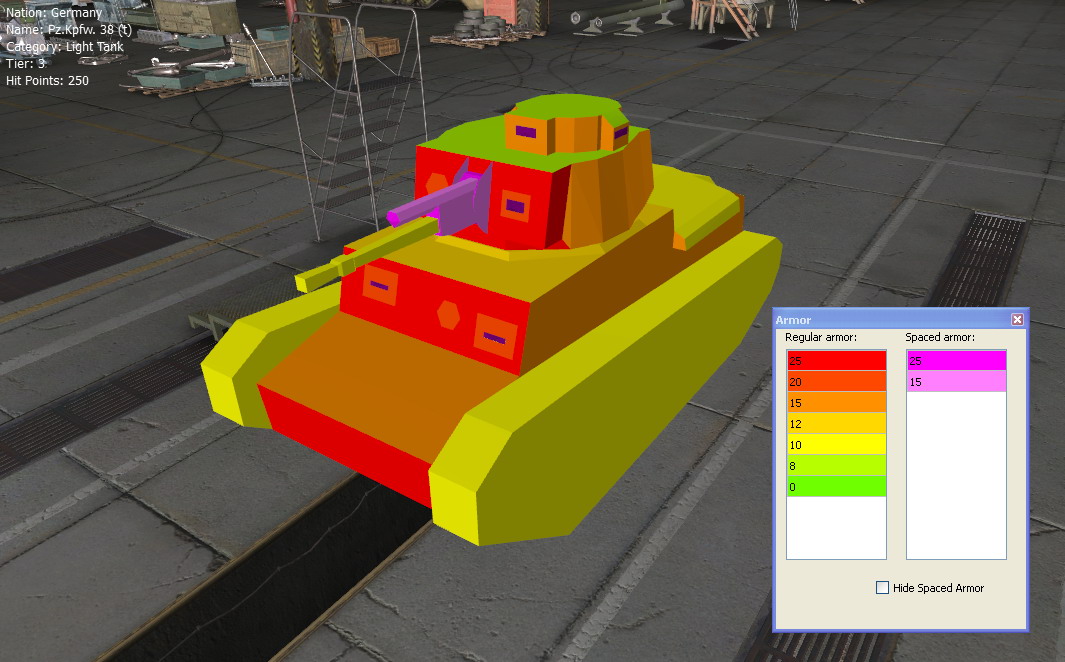 Basically, the hull armor model in the game you can see above belongs to an early Panzer 38t (Ausf.A/B or so – 25/15/15), while the visual model belongs to the uparmored Panzer 38t Ausf.E or F (which in real life has 50/30/15mm armor). What I THINK happened here is – there is a restored Panzer 38t in Kubinka (it’s Ausf.F – remember I mentioned A.Kalinin? He actually helped restore it). Wargaming simply took the advanced model and made the ingame vehicle based on its looks, but because they didn’t like the armor setup, they used the early one instead.

Likewise, the elite turret is messed up. According to the module name, it’s “Ausf.G”, but the looks is “Ausf.F” again (differences are minimal) and most importantly, the armor setup belongs – once again – to early Ausf.A/B variant, which is weird – the Ausf.G variant historically had 50/30/25 turret armor instead of current 25/15/15). Here, the developers can do two things: obviously, they can just buff the turret to its historical values, or to remodel the second turret to Ausf.B, leaving Ausf.A turret as stock. Both have the same armor setup, the differences between them are the commander’s periscope has armored cover and a few other minor things.

Yea, that’s not my favourite part. The engines are unhistorical as well. The stock engine is historical (Praga TNHPS producing 120 horsepower – well, actually, it needs a buff to 125 horsepower), but the rest was taken from other vehicles or is fake. And yes, wikipedia has it wrong. Through the entire production run, the Panzer 38t used the very same engine: Praga TNHPS/II, 125 horsepower inline water-cooled gasoline engine (but then, the wiki has lots of things wrong, mixing the export tanks with TNH series and such). In any case, it’s possible to introduce here the up-tuned TNHPS engine (from G.W.38 für SIG33 – 150 horsepower). Would the Praga AC (150hp) fit the 38t? I don’t know. In any case, the weight would have to be changed as well (the vehicle in the game is too heavy anyway, it has the late variant weight and even that is incorrect) – current top weight is 9,82 tons, the historical weight for Ausf.B is 9,73 tons (well, 9,725). I think that with reduced terrain resistance and increased traverse, it’s possible to keep the tank mobility the same even with reduced engine power.