what follows is something quite extraordinary. It is not that often that someone manages to find something completely new in the archives and gets the opportunity to publish it. In this case, it was Renhaxue (US forums), who found the following tank in the Swedish archives he keeps digging. Credits go to sp15 as well. Thank you, guys.

Basically, what we have here is a new version of Praga V-8-H medium tank from 1941 with TNH-type suspension. It’s designated “V8H-Sv”. 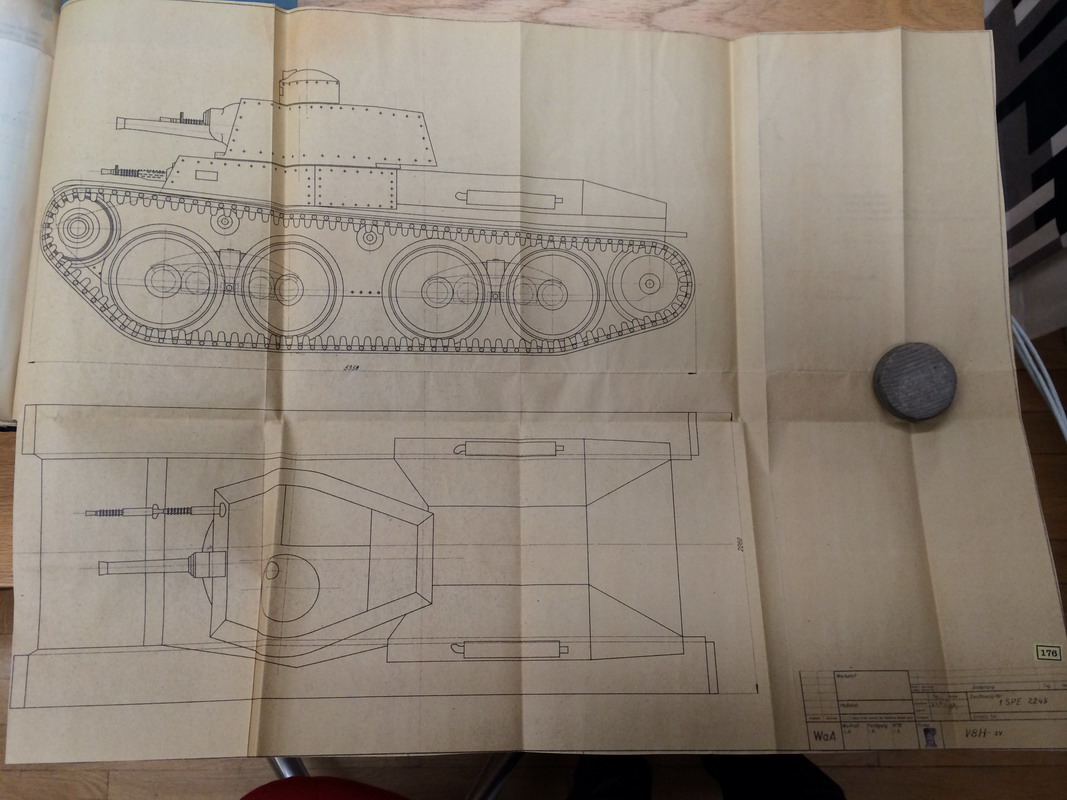 V8H-Sv designation follows the general Czech tradition of designating the tracked vehicles with the names of the engines. It was so in the TNH series (named after the TN engine, H variant – “tracked”) and this is no different, only instead of the 6-cylinder Praga TN engine, we have the V8 Praga engine, designated V-8-H. The vehicle shares the name with the factory designation of ST Vz.39 (which was also called V-8-H), which is why the “Sv” part is needed for proper export identification. In this case, it means “Sweden”.

This vehicle project was offered for export to Sweden by a letter from ČKD from 8.9.1941. It is clearly an export variant of the V-8-H. It is documented that Scania Vabis was interested August 1941, but nothing came of it and Sweden ordered their own Landsverk m/42 tanks instead.

The letter describes the vehicle as armed with a 47mm gun (600-750 m/s, 1,6-1,7kg shell weight), capable of fighting enemy armored vehicles and anti-tank guns. The crew consists of four people, with the commander and gunner in the turret (commander on the right side), the driver and radioman sitting in the hull. The radioman also serves as the hull machinegunner.

The dimensions of the vehicle are as such:

The vehicle is capable of reaching maximum speed of 40 km/h, it is capable of crossing trenches of 2,2m width and it is capable of climbing sloped surfaces of 35-40 degrees of elevation. It can also ford water body up to 1 meter deep (with solid bottom), it can break through of wall up to 0,45 meter thick and can bring down trees of up to 30-40cm trunk diameter.

The turret is also armed with a heavy 7,92mm machinegun. It can be either paired with the gun, or can be de-coupled and used by the tank commander independently. Another 7,92mm heavy machinegun is installed in the frontal hull. Hull machinegun can traverse 30 degrees, elevate 15 degrees and depress 10 degrees. It’s operated by the fourth crewman. The vehicle carries 60 rounds for 47mm gun and 3000 MG rounds.

The vehicle is powered by a Praga V8 (“V8H”) 14 liter engine, producing 240 horsepower at 2000-2200 RPM. The engine runs either on gasoline, or gasoline-ethanol mixture and is water-cooled. The suspension is of TNH type, with four doubled large roadwheels and 2 return rollers.

Ano interesting connection between the Czechoslovak and Swedish tanks.