Wargaming is currently testing a huge (2x2km) version of the Ensk map. There are three bases on it. It is used for a special “defense of the palace” PvE mode – players are in the middle (in the city) and the other side (bots) are arriving in waves from various sides, trying to capture the three bases. The main goal is to kill all the bots. The bases are not equal, one of them allows players to respawn.

Here’s a minimap of the mode: 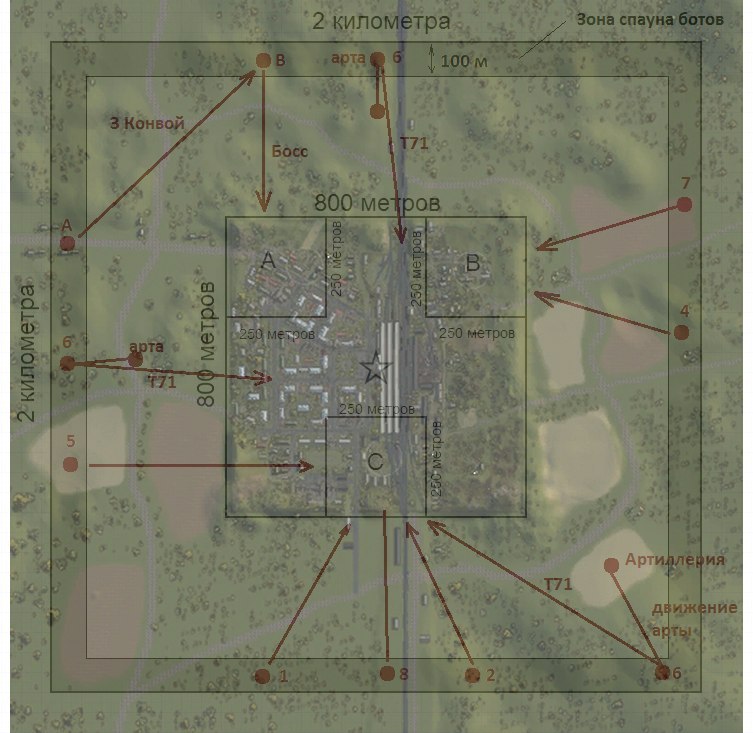 Apart from the waves, there is also a “convoy” of bots, heading from point A to B (upper left corner). If it is not destroyed and arrives successfully, a wave of boss tanks spawns. The mode is played on tier 8 tanks with practically unlimited ammo. The arrows on the minimap represent the waves of bots and their directions. There is also apparently a special “wave” of artillery, moving in from points 6 to the ares not far from it.

The map itself can be previewed here:

Here is a table of the waves and their composition. The battle lasts cca 30 minutes. 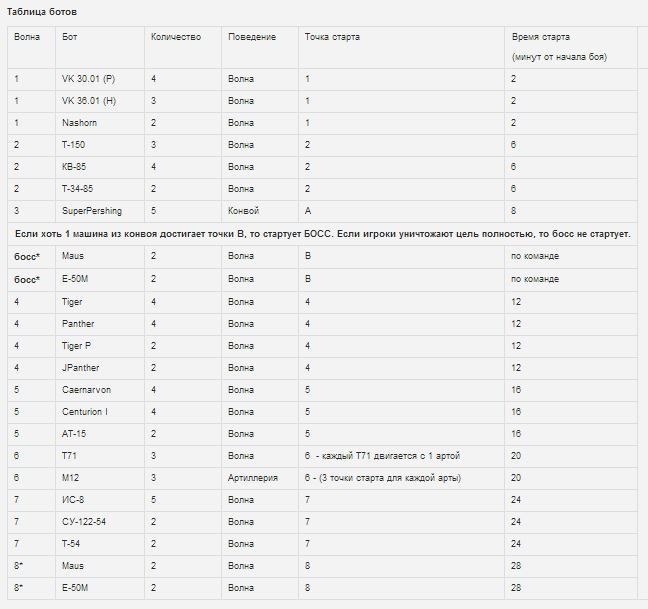 - the task of players is to hold 3 strategic locations and survive. If they hold base A, they respawn there after they die. If they lose base A, they no longer respawn.

- wave of bots, type “regular wave” – the wave of bots moves to the nearest player-occupied base using the shortest path and maximum speed. If bots spot a player, but can’t fire at him, they will continue to move to their target. If they can open fire, they stop and start firing without waiting for full aim circle. If the player disappears from line of fire, the bot will start moving to the target. Upon reaching it, the bot will start to capture it and if successful, it starts moving to the next base.

- wave of bots, type “convoy” – moves from A to B with full speed, if a player is detected and in line of fire, the convoy slows down to 50 percent and starts firing. If it reaches its target, it stops being active (disappears).

- wave of bots, type “artillery” – it moves to the nearest artillery position, from where it can shoot at player-occupied base. Upon reaching the position, it starts shooting into the base area. If it spots a player, who is not in direct line of fire, it will attack the area around his position. If player is in line of fire, artillery will attack him, prioritizing the nearest target using indirect fire. If a player is closer than 100 meters, artillery will switch to direct fire. If the LOS is blocked, the bot waits for 10 seconds and then returns to its standard shelling pattern