Panther 88 aka Hitlerpanther (seen that on Russian server, referring to 88 being the symbol for nazi “heil Hitler” greeting) was introduced to the premium shop with following description and price: 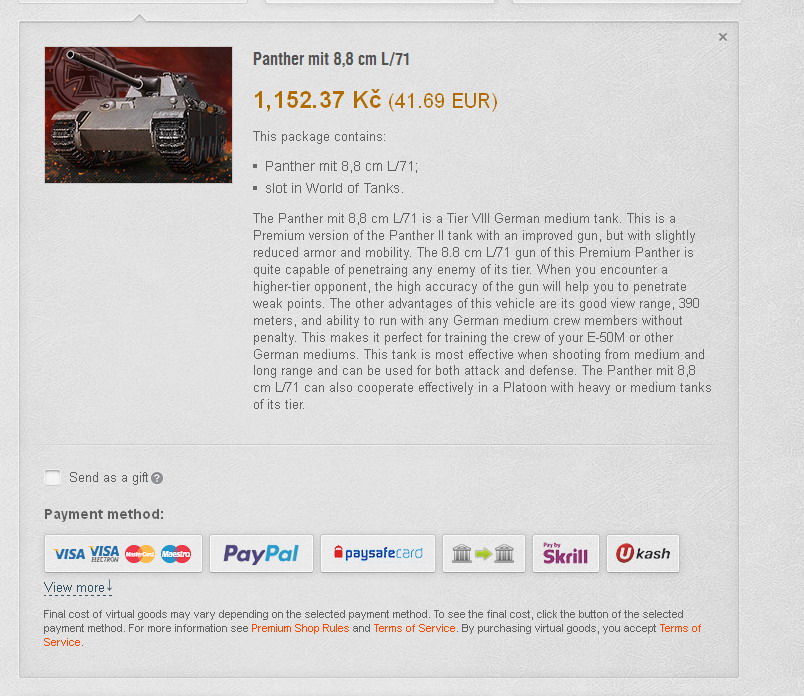 My advice about this offer is:

DO NOT BUY IT.

Two reasons for that really. First and the most obvious one is that according to people from Russian server who actually bought it as well as some supertesters, the tank is shit. It’s uncomfortable to drive and completely hopeless without limited MM against tier 10′s. Good luck flanking anyone in a German sniper. It’s definitely not a tank for beginners.

Second reason is perhaps even more important. Wargaming did not introduce this tank to the 9.5 Common Test, most likely fearing that everyone would see it’s a piece of shit, which would hurt the sales. I mean, why this tank anyway, it’s not like WG couldn’t have modelled the other Leopard prototype (with 90mm and yes, there was a version with 90mm gun) and detuned it to tier 8. By denying us the opportunity to test it, they are making us buy it blindly and no, 40 Euro is really, really not worth throwing away just to find out you bought a vehicle that sucks. Spend it somewhere else – it’s Christmas, take your significant other, friends or family out or buy them more presents – make THEM happy, not SerB.