today, a new Soviet tier 8 heavy premium tank is getting introduced to the supertest – it’s called IS-5 (Object 730) and here’s a short preview of its history and how it’s going to look. 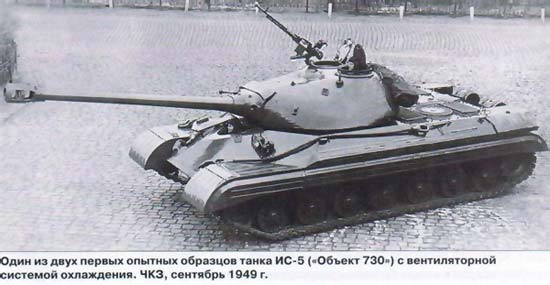 Object 730 (also known under its IS-5 designation) was a Soviet heavy tank and a precursor to the later design known as the IS-8 (or T-10). To avoid confusion: there were two IS-5 tanks actually. One was a modified IS-2 (also known as Object 248), the other is this one.

The development of this vehicle started in late 1948. The goal was nothing less than complete overhaul (modernization) of the IS-4 heavy tank in order to increase its performance. The designers of the vehicle (Chelyabinsk plant) proposed to replace a number of internal components and to make the entire vehicle weigh less (specifically, to lower the weight from IS-4′s 60 tons to 50 tons. This “slimming”, along with the use of modernized engine was to assure better combat characteristics.

The early variant of Object 730 was developed in Spring 1949 by the Chelyabinsk Tractor Plant (ChTZ) by a team led by Zh.J.Kotin. It was quite different from the original IS-4, especially the turret was reworked to implement the lessons learned during the IS-3 and IS-7 development. The transmission, suspension and loading mechanism were updated as well, the combat and engine compartments also underwent complete overhaul. The new modernized turret was cast with variable thickness and was fitted with the classic D-25T gun in a new mount, that was sturdier and also easier to fix and install. The gun was fitted with new electromechanical shell loading assistant for higher rate of fire.

In early April 1949, the full set of documents along with a wooden mock-up was sent to Moscow. There, the representatives of the army and the industry checked it out and made a list of required improvements to the design. The design was updated as a result and in May 1949, it was approved. After that, the designers started working on assembly documents for the most difficult to produce components first, as the production of a new tank took a significant effort to organize. The documents were ready in late June 1949.

The assembly of the prototypes was delayed however and it was decided to use modified IS-4 vehicles as prototypes instead. In order to meet the testing deadline (which was August 1949), the designers took two IS-4 tanks and reduced their weight to 50 tons by removing the turrets and using mockup weight blocks instead. The V-12 engine in the prototypes produced 700 horsepower, the stronger, modified V-12-5 appeared only later. A whole set of modules for the future Object 730 was also tested on the IS-7 prototypes, modified for this task. And so was the summer of 1949 filled with testing of various components of the vehicle in various ways.

The first real hull of the true Object 730 was ready on 30.7.1949, second hull arrived on 9.8.1949 in Chelyabinsk. At this point, the assembly of both tanks was further delayed, as some of the components were still not developed properly or were still being tested. Nevertheless, the first prototype was ready in mid-September 1949. The first prototypes still had an older engine cooling model and 6-gear planetary transmission.

Both vehicles were factory-trialed in September 1949, but these trials ended in failure, specifically the transmission proved to be problematic. As a result, it was decided to use a different, 8-gear planetary transmission. Both the 6-gear and the newly designed 8-gear one were tested against one another and the test showed the superiority of the new design. This change (along with several others) were implemented into the Object 730 project by the end of 1949. A new iteration of Object 730 documents appeared in January 1950 with this (and other changes) already implemented.

In March 1950, three more (already improved) prototypes were built and in mid-April 1950, the prototypes underwent series of difficult trials. The results were positive and all three prototypes fulfilled the requirements. The vehicles were judged to be more reliable than other contemporary medium tanks and there was room for modernization as well. More trials followed and in summer 1950, the project was polished and 10 vehicles were built. These were sent to various sites for military trials and despite some shortcomings of the suspension, they again passed them successfully.

Despite these successes however, the tank was not accepted in service, as by the end of 1950, a new list of requirements for the project was issued by the arty and the ministry of transportation. This new list required a significant overhaul, which would eventually take years to complete and by the end, the vehicle would recieve a new designation, the IS-8. It would eventually be accepted in service as the T-10 in 1953. Even though the Object 730 (IS-5) was not mass-produced, it allowed the development of various modern components, later used for the IS-8 tank.