Hello everyone. Type 59 is a legendary tank in WoT, but what do you know of its real life variants? Let’s have a look at a few of those in an article by Chickentikka – right from the “source” so to say, as he is a Chinese player. Enjoy!

The Type-59 is basically the clone of the T-54. But we have to get one thing straight here; the Type-59 is a licensed Soviet tank built for the People’s Liberation Army during the 1950’s, when Sino-Soviet relationships were very good. So the Soviet Union, as China’s big brother, brought engineers and equipment to build the first tank factory in China in Baotou (where they still produce tanks to this day). Amazingly, it is still in service but with enhancements, this is what I am going to show you. 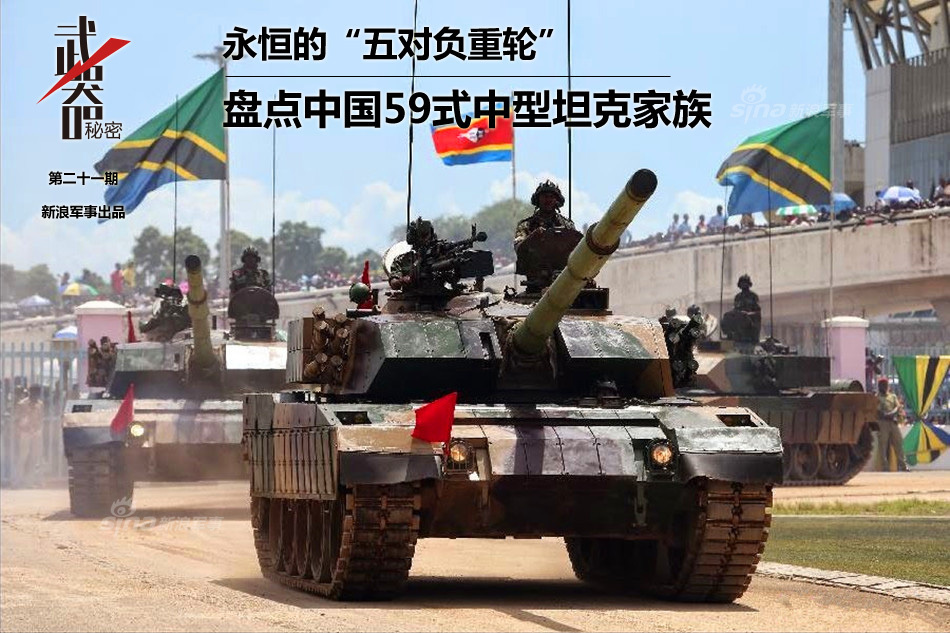 This is a modernised type 59 sold to the Tanzanian Army. Look at how modern it looks!

At first, T-54 was virtually identical in every way to the Type 59, but gradually overtime, Sino-Soviet relationships took a turn for the worse, so China was left alone without foreign assistance to develop future tanks. This was of course a major problem since a country that had fought over 100 years of wars couldn’t keep up with the new advancing technology and without a good industrial infrastructure, it forced the Chinese designers to replicate existing tanks. During the late 1950’s and years after, China had to design a new tank or perhaps give the Type 59 better upgrades. 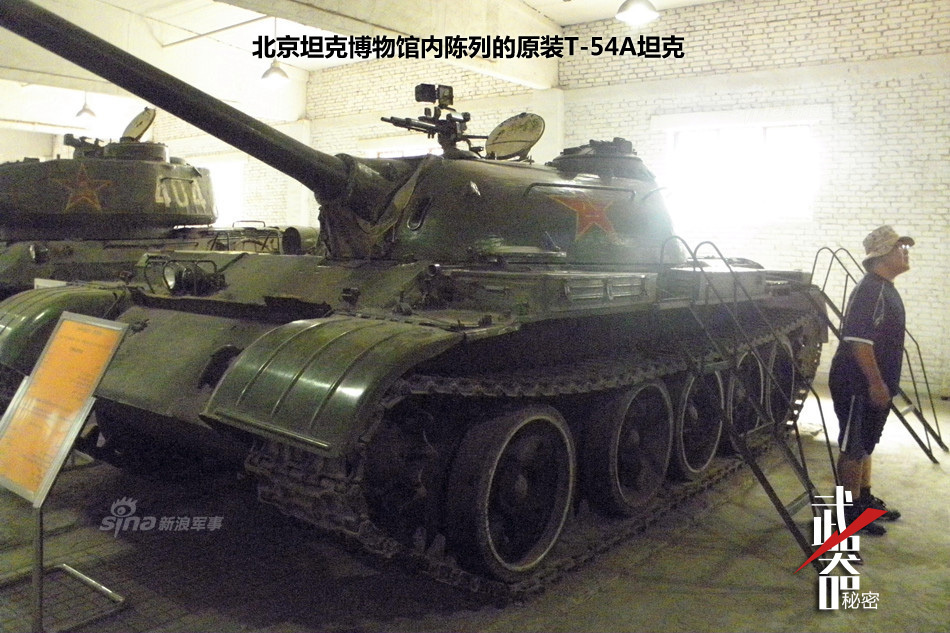 This picture shows the very original Soviet built T-54 sent to China. I have a video filmed by me inside this exact tank as shown in the photo. You can just go inside and do whatever you like (it’s situated in Beijing tank museum).

It was agreed in 1954 that the Soviet Union would give the blueprints and the new technology needed for the production of such avehicle. With the assistance of Soviet engineers, factory 617 was built. 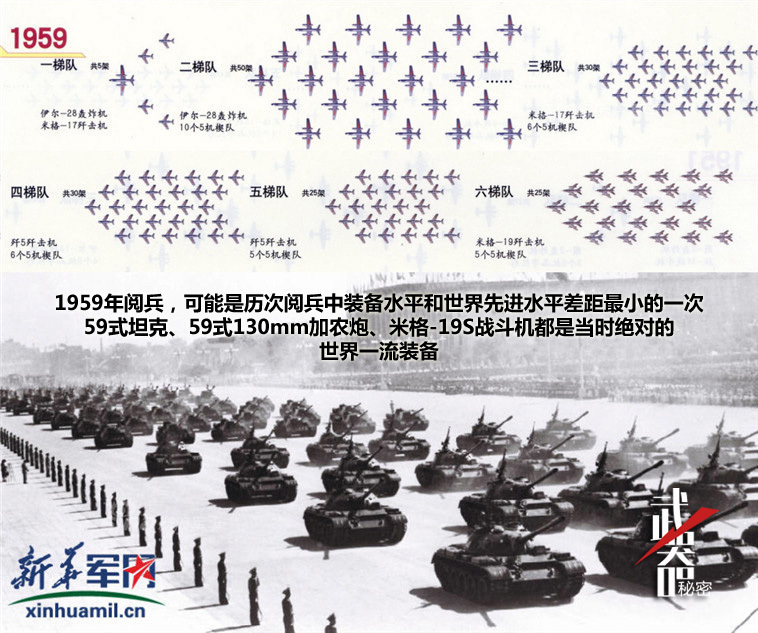 By 1959, China was capable of independently manufacturing this tank, but the rare metals needed for the armour had to be imported from foreign countries (as well as other resources). During the 1959 Chinese national parade, 32 Type 59s were on show, and this was the year in which China was considered to have one of the best equipment parades in the world (of course, most of which were Soviet license-built products). Nevertheless, after 1959, China was never going to have the world’s most advanced military equipment (just to clarify here, by most advanced military equipment, I meant the tanks, planes etc. were really advanced, but that does not represent all the troops in China – just the PARADING troops). 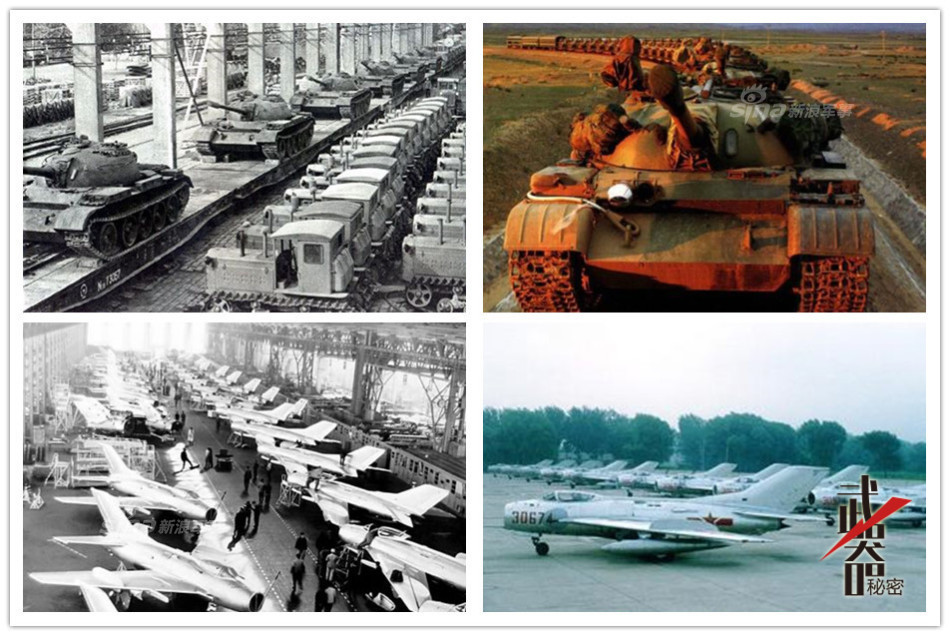 In 1960, China’s relationship with USSR became so bad that they became enemies (although being communists). Production of the Type 59 ceased due to the incapability of producing the materials needed for the armour and other equipment (to be more precise, its cast steel armour). Similar things happened to other military equipment, such as the Jian-6, which is a clone of the Russian Mig-19. However, a solution was found in 1963, when the Chinese engineers managed to produce an adequate Chinese, locally produced, high quality cast steel armour. And so the production continued. 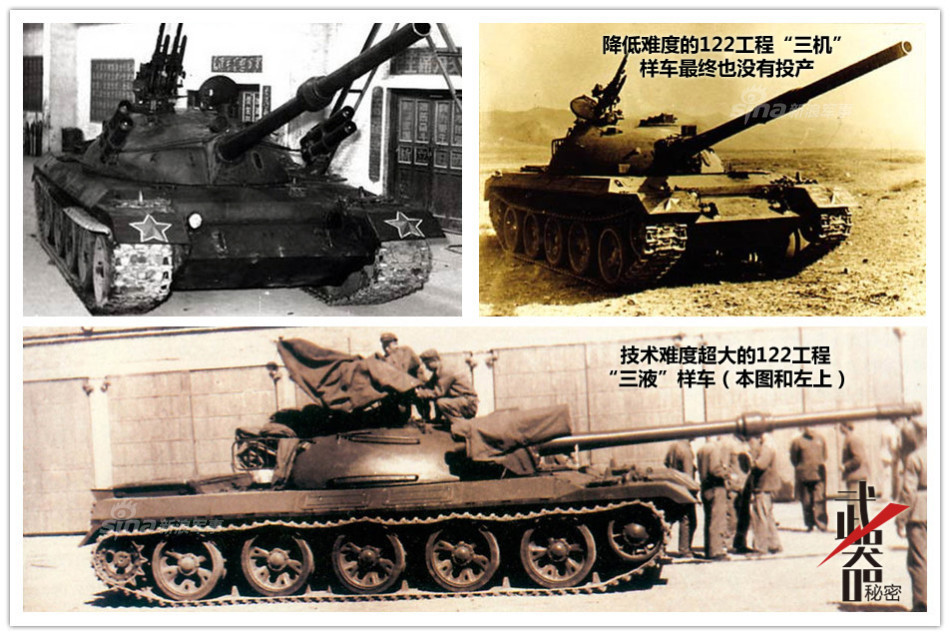 China built Type 59s from the 1950’s all the way to the 1980’s. This was because there was no replacement for the Type 59, which was approved by the military. So with the rapidly expanding armoured units, further Type 59s were made even after the M1 Abrams were produced. The production finally stopped during the 1980’s.

Picture above is the 122 project which was supposed to replace Type 59 and failed, so China just had to stick with Type 59 for 30 years. Object or Project 122 is a medium tank, with the design spec of using hydraulics and various high tech advancements to catch up with Leopard, T-64 and AMX-30 series of tanks. 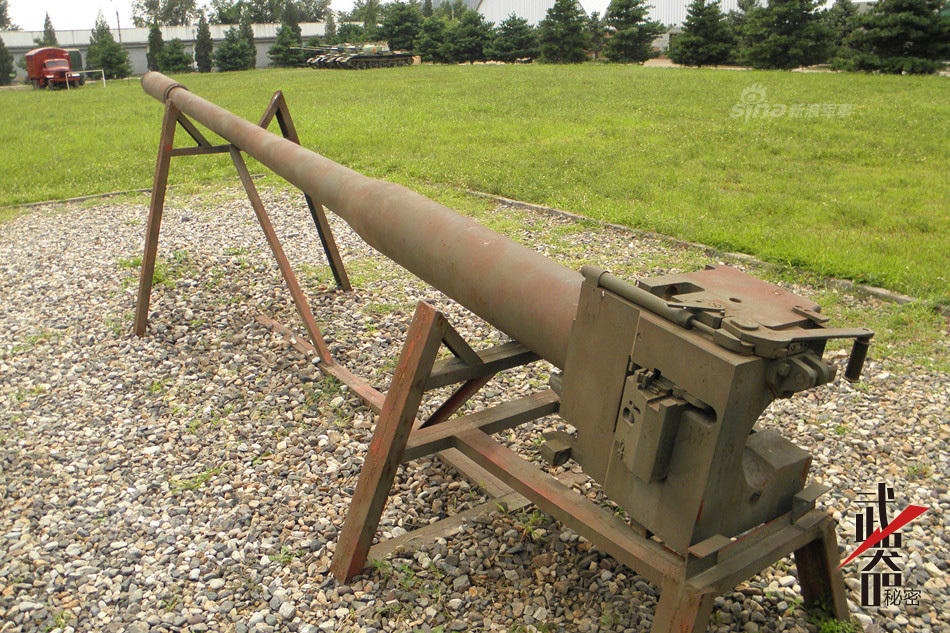 Type 59′s main gun is a 100mm rifled gun, which was a copy of D-10TG. Note that the fume extractor (bulky bit in on the barrel) is a good way of identifying this gun. By late 1960’s, the power of this weapon was already considered to be weak. With no real advanced fire controls, it was out of date, future variants would be needed to improve the firing controls. It has one 12.7mm anti air machine gun on the turret and a coaxial 7.62mm machine gun. 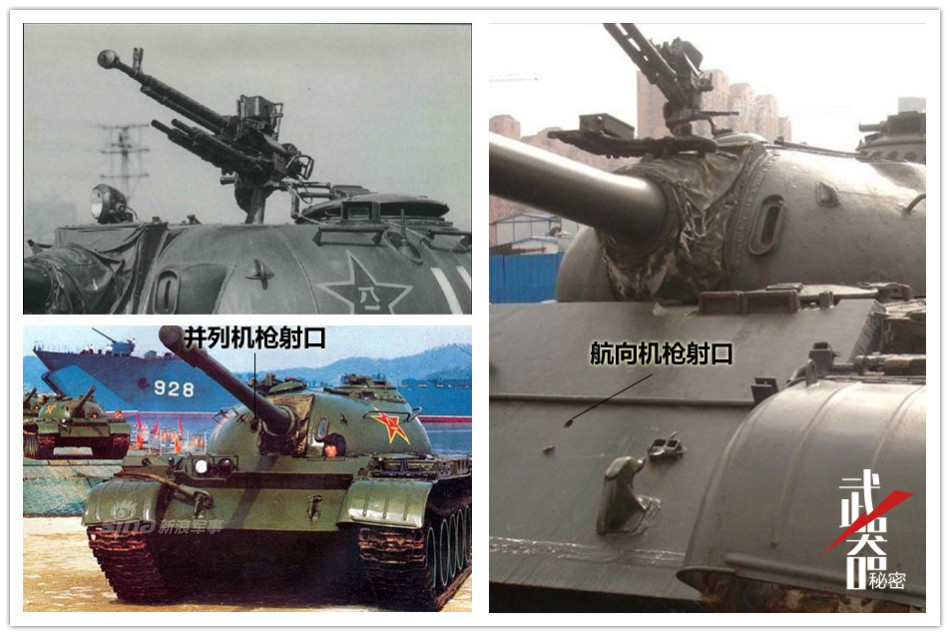 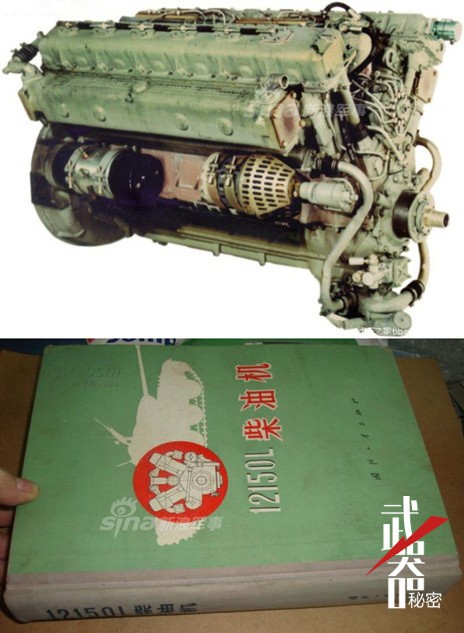 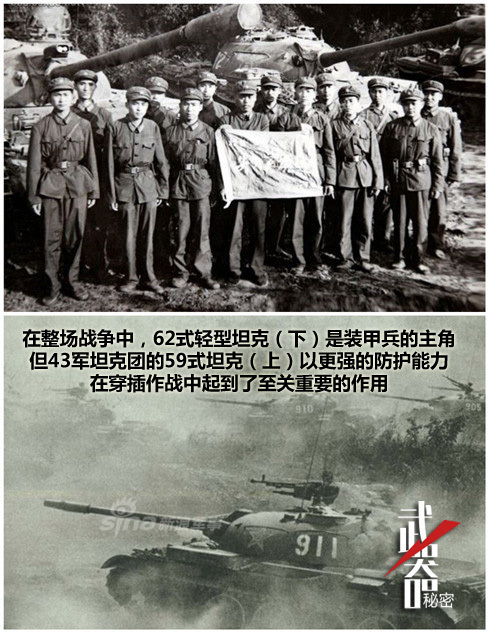 The Type 59 went on to fight against the Vietnamese. Most of you are probably like WTF, communist vs communist, let me quickly explain. China gave Vietnam lots of weapons in the Vietnam war to fight against the US. After the war, Vietnam had to decide if they wanted to go to the Soviet side or Chinese side because China and USSR weren’t friends, and in fact it got so bad that USSR was going to nuke China (USSR called it a surgical operation). So Vietnam obviously went with the stronger USSR and China, after supplying so much equipment to Vietnam, just lost an ally and were obviously not happy. So a border conflict began and it became a full scale war, note that Vietnam was attacking Cambodia so China wanted Vietnam to stop the aggression so war was kind of inevitable. Funnily enough, China this time had political backup from the USA (politics changed fast right?). China’s leader took a visit to the USA, so relationship with USA improved dramatically.

After all of that, the Type 59 and its brother the Type 62, were brought to the wet and hilly terrain around the Vietnamese border. The Type 62, which is a lighter version of Type 59 designed to fight in China’s southern terrain, showed to be quite weak against RPGs. The Type 59 showed to be a much better tank, however the lack of good fire control showed it had weaknesses and the poor radio was very prone to being intercepted and listened to by the enemy. 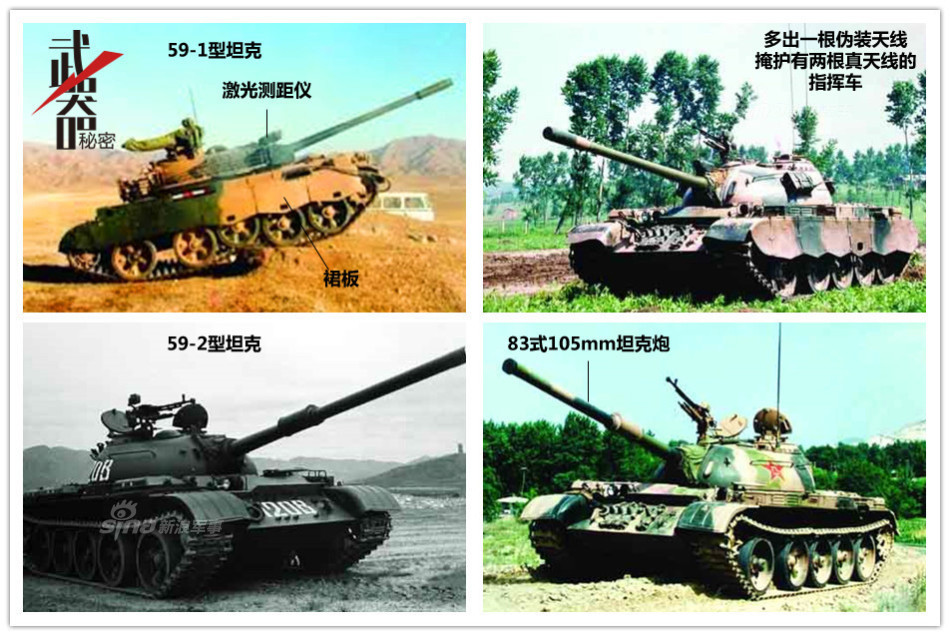 War was a catalyst for the Type 59 to be upgraded to a new level this time. 59-1 had the range finders, night vision, infra-red light and some kind of radio antenna camouflage (basically, fitting three antennas of which one or two of them is fake so the enemies wouldn’t know which the commander’s tank is). 59-2/2A had a copy of the L7, the Type 83 105mm rifled gun with an auto loading mechanism, better fire control system, a fire extinguishing system of some kind, and a new frequency jumping radio, it might be called an alternating radio in English, it changes frequency so it is harder to be tracked by the enemy. 59-1 in the picture has side-skirts. 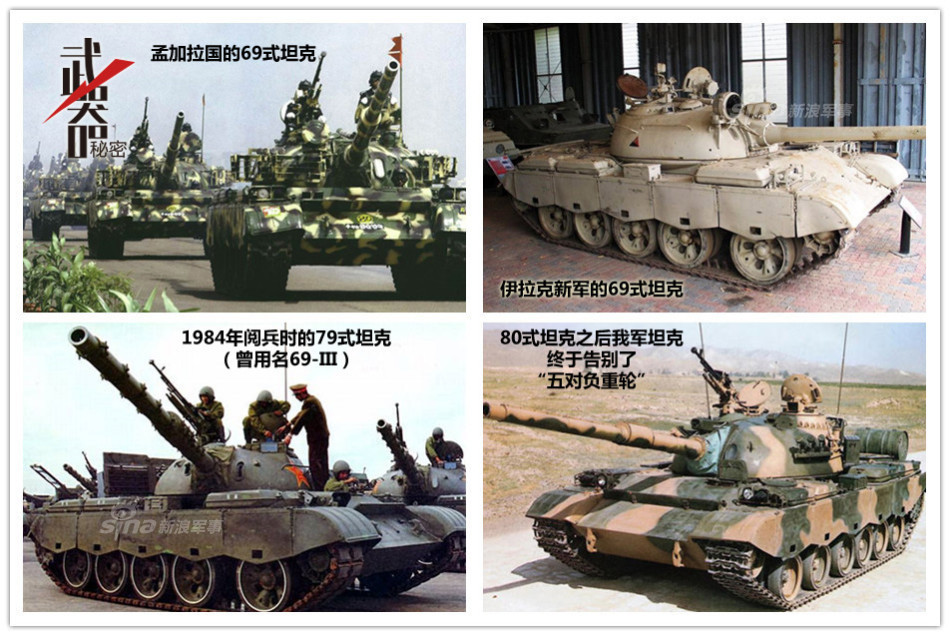 During the 1969 Sino-Soviet border conflict, the PLA was able to capture a Soviet T-62 MBT. The captured tank was examined, and some of its components, such as the Soviet Luna IR searchlight system, were copied and integrated into the Type 69 design. The Type 69 and Type 79 tanks became the first independently Chinese-developed main battle tank. However, the early version of the Type 69 was only produced in limited quantities. The PLA was unsatisfied with the Type 69′s performance, but ironically it became one of China’s most successful armored vehicle exports. Over 2,000 were sold worldwide in the 1980s.

This Type 69 although called 69 instead of 59, is really just another improved variant and really a brand new tank. Bottom right image shows the Type 80 which ended the 5 road wheels design from the Type 59 and became 6 road wheels.