Earlier I was reading through some Q&As SilentStalker posted and I ran into these.

This is a strange response by SerB. Honestly either he cannot read or someone has tampered his $200+ Firepower book. I’m going to try to set things straight with the T110E4.

Before I jump into Hunnicutt lets see what The_Chieftain had to say about the T110E4′s historical background back when the first screenshots came out (had to go digging in the “Epic Thread” for this one).

The info in Firepower tells this about the T110E4: The T110E4 was Chrysler’s response to the problems in their T110E3 design(power pack issues).  The T110E4 was planned with a AOI-1490 located in the rear of the hull along with the transmission. The rear section of the hull was to be covered with infrared shielding. The main weapon of the T110 series (the T123 120 mm gun, prototype to the M58) was to be mounted in a gimbal ring mount(aka what the SU-85 & the T110E3 have).This arrangement gave the T110E4 15 degrees of movement either left or right and -10 to +20 degrees of depression/elevation. The gun mantlet was to weight ~2 tons and would be ~230 mm thick without any curvature being taken into consideration. The rest of the T110E4′s hull was to be protected by 127 mm of armor sloped at 60 degrees(254 mm of effective armor). There was to be 4 crew members with the driver and gunner being located uncomfortably in the front of the vehicle wedged against 127 mm of armor. The cupola was to have a .30 caliber MG and was to use an OPTAR rangefinder(using pulsed light instead of a laser which haven’t been discovered yet) .

There is no mention of any 180 degree turret in Hunnicutt’s book. There are even diagrams of the T110E4 that show it is impossible for there to be a turret because of the mantlet, the engine deck, and the lack of anything resembling a turret traverse mechanism. 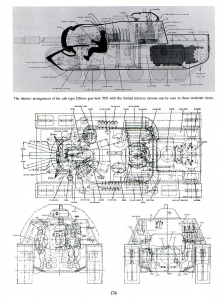 The last image is the most detailed view of the T110E4 and has no signs of any 180 degree turret.

It is really sad that SerB claims to use Firepower as a source for the T110E4 but it has no information to support the T110E4 in WoT and rather destroys the idea of WG’s T110E4. The turret, the gun, and the armor(the armor values are actually pretty close, but they aren’t exactly the same due to WG’s imagining of the T110 series hull shape and the stupid turret on the E4–I sorta guess SerB’s first post is as bad as I originally thought, oh well) is all pretty messed up on WG’s T110E4. It would be a sign of intelligence to admit the T110E4 is a fake rather than making yourself look like you are illiterate and blind.

Sorry if this was sorta unorganized, I was kinda ranting and going in a hurry.