SS: Today, we have another guest article from SoukouDragon :) Enjoy

A new light tank designed for the Imperial Japanese army. It was to carry with it the same firepower as the Chi Ha Shinhoto and have 300mm wide treads. The 150hp engine was supercharged. Main armament was the Type 1 47mm tank gun. Since it was expected to use its cannon often, 90 rounds was required.

In world of tanks, its 15 hp/ton is grossly outmatched by the other tier 5 light tanks which have over 25hp/ton. Even with 300mm wide tracks on the 10 ton tank, it is difficult to imagining the Ke Ho to have similar acceleration with the other tier 5 light tanks. The diesel 150hp engine is an in-line 6 cylinder engine. Even though the Chi He tank is of similar dimensions to the Ke Ho but a little longer, the Chi He’s 240hp V12 diesel engine would probably be too large to serve as an upgrade even though 240hp would probably provide enough hp/ton. 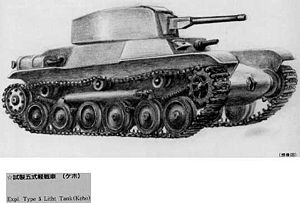 The 47mm cannon would be comparable to the 50mm L/60 on the VK 1602 Leopard. The combat weight of the Type 1 47mm cannon is about 400kg. With about just 140kg more, the experimental 57mm cannon that was tested on the early Chi To could perhaps be fitted on as an upgrade. That would give the Ke Ho competitive firepower amongst the tier 5 light tanks.