several people asked me yesterday, how does one “fix” random battles when the matchmaking takes the players from the entire server. It shouldn’t be possible to do, right?

So just a quick description how this works. Next time there is some competition (you know, like the one for 0.8.5 – top XP gainers from each class etc.), check on how many of the victors are clanners and how many of representatives of those clans are present.

How to do it

Here’s an example of a fixed battle (thanks to Rasan and his clanmate): 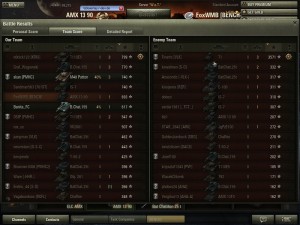 Here you can see a typical (albeit lowtier) example of fixing battles. Several friends (this time from different clans, although Suicide Division (S-D) and Valkyria (VLK) are present on both sides) decided to allow the T1 Cunningham to get an insane XP gain.

Basically, what the culprits do is they abuse the MM mechanism for matching platoons. This works best around 4-5AM, when there are very very few players on the server. Few players means few platoons. In other words: if you suddenly create two 3 man platoons (those are rarer) and click on “battle” at the same time, you have a really high chance of ending against each other, because there will be no more 3 man platoons online at that point and the matchmaker will have no other choice than to compensate by putting your friends’ platoon against you.

This is how the jokers from the picture did it. As you can see, it’s two platoons (of different size, so I assume this was done in the early morning to ensure they would be matched against each other) and the Cunningham has 3 kills, corresponding to the first platoon – all 5 of them probably simply met somewhere and let the Cunningham kill them. Funny and harmless? Well, yes, sure, unless you are fixing a competition that way.

There are of course more sophisticated ways how to do this, leading to even “better” results (for example two clans choosing two players for the rewards, then swamping the random with various platoons at 4 AM, this way, a random player can rack up even 15 kills if both teams end up being filled with people from those two clans – hell, this is possible even in ONE clan, if it is big enough).

This phenomenon is not limited to EU server of course (remember the Russian “superplayer” in FV215b 183, who destroyed 15 tanks with 13 shots or so?) and is well known for ages, yet Wargaming does nothing against it, unless the competition winners are directly accused of cheating (I believe this has happened only once, few patches back, can’t remember the circumstances though).

Either way, I believe that the replay examination of the top winners of the “Type 59″ type competitions should be mandatory to prevent this shit from happening…

32 thoughts on “About fixing battles”