Now the Americans already have one don’t they? Well, by playstyle the T26E4 doesn’t really fit the stereotypical medium role does it? So are there any other vehicles that could be introduced to fit in a tier 8 premium medium spot? Yes, a lot actually.

Lets start off with the more logical choices. The T42 might be the easiest vehile to implement. Historically the T42 was based off the T37 light tank and was to be better armored than the M46 while keeping approximately the same firepower. The T42′s turret was used in the M46E1(upgraded M46) and the  M47 Patton. The chassis is already ingame as the T69′s chassis while the turret and gun are represented by the M46′s upgraded turret and the 90 mm gun M36. The T42 would have 4 crew members and could achieve speeds of 51 km/h (with 13.3 hp/t). 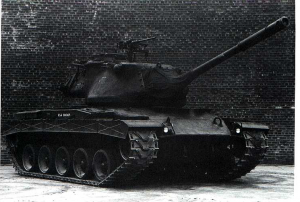 Another choice is the M47 Patton itself. The M47 used a hull based off the M46 Patton but featured better sloping so the protection would be equal to the T42 hull. The gun is the same as the T42(the M36). The M47 had a top speed of 48 km/h while having 15.9 hp/t. The M47 should be superior to the T42 in mobility besides top speed, also you get to train 5 crew members in it. I’d be happy with an M47 premium but I’d like to have the M47 as a researchable tank at tier 9 and have the M26 and M46 combined as a single tier 8 tank, we could see it in the Euro Tree too. You could have the M47 as a German Premium too…

The T25 and the T25E1 were modified T23s that were fitted with the  90 mm gun T7(aka M3) in a new turret. The T25E1 used a more conventional transmission because the original T23 Electric transmission(used in the T25) couldn’t deal with the weight being added. The T25E1 would be a better choice than the original T25 in my honest opinion.  The T25E1′s turret was 76 mm thick with an 89 mm thick mantlet. The frontal armor is 76 mm thick at a 46 degree slope to protect the crew of 5. The T25E1 could reach speeds of 56 km/h but only in short spurts, its sustained top speed was 48 km/h and had 12.9 hp/t. the T25E1 would be the most sluggish and weakest armed and armored out of these 3 vehicles and would need good “soft” stats for compensation.

Now for some prototype/conceptual vehicles. In 1952, the first Questionmark conference was held. Out of this conference the M-1, M-4/M-5, and the M-7 could be viable tier 8 mediums.

The M-4 and the M-5 only differed in powerplant, the M-4 was to use a failed engine(AX-1100) while the M-5 was to use the AOS-895 and would have good mobility(13 hp/t). They had 102 mm of armor sloped at 60 degrees to protect the 4 crew members. The turret for these designs was placed in the rear to minimize overhang of the gun which was the 90 mm T139 gun. The M-5 should still get a good deal of comfort(which all these other tanks have an exceptional amount of comfortable gun depression). I think the M-5 would be a good choice as it unique and it isn’t over/underpowering.

The M-7 is a strange vehicle. It has the same chassis as the M-5 as above but the turret is a pod with an autoloaded 90 mm T139 gun. The weight of the M-7 was only 32 tons and would have 15.6 hp/t. There was to be no dangers of gun fumes or recoil but this arrangement also made vision more difficult for the crew of 3. The M-7′s autoloader would have access to many more rounds and for this reason it would be near impossible to balance as a tier 8 unless it is extremely nerfed, however the M-6(37 tons) was armed with a 105 mm T140 making the M-6/M-7 a tier IX candidate.

Now the last vehicle that I would endorse will come from the third Questionmark conference. Here many medium tanks were proposed but most either had composite armor or a smooth bore 90 mm gun so that only leaves one vehicle from the conference available, the TS-3. the TS-3 was a 40 ton vehicle armed crewed by 4 tankers and was armed with the 90 mm T139 . The armor was 96.5 mm thick and sloped back at 60 degrees; overall the TS-3 had less overall armor than the M48. The hp/t ratio would be ~14 hp/t giving the TS-3 good mobility with the 560 hp AOI-1195 engine. The TS-3 could be an effective premium if balanced properly.

There are more concepts from the US which could fill this position but most of the ones not here didn’t receive a proper designation and are pretty boring to be honest. I don’t want to talk about the “90 mm Gun Tank Proposal” or the “Lightweight Medium Tank” and you really don’t need to know, but they do exist.