as you have probably read already, the Object 430 will be most likely the top tank of the Soviet tier 10 branch (unless Evilly screwed something up and SerB will debunk this). Let’s have a look at this interesting vehicle together. Object 430 is an experimental Soviet tank. After the war, the T-54 medium tank became the standard tank for the Soviet army, but as the 50′s came and went, it became more and more clear that its original armament, maneuverability and armor configuration started lagging behind the western world trends and that the T-54′s will have more and more trouble dealing with contemporary western tanks. Therefore, several tank development programs were started with the goal of creating a vehicle, that would outperform anything it could meet on the battlefield.

In the Kharkov mechanical plant (ZIM, Factory named after V.A.Malischev – a Stalin-era politician), a new department (KB-60M) was created specially for this purpose, it was led by the plant chief designers J.I.Baran and A.A.Morozov. In 1953, this department finished a preliminary project idea for the new tank, designated “T-64″, which was approved by the army. The project was officially started in April 1954 and recieved the designation “Object 430″. The sketches were ready by the end of 1954 and in May 1955, work began on the technical project itself. This all was finished by June 1955 and a wooden mockup was made.

First two prototypes were made in 1957 and they recieved the designations “Object 430-1*Z” and “Object 430-2*Z” (Z here means “trial” apparently). These protypes were tested by the factory and also trialed against another experimental Soviet tank, Object 140. A number of defects (especially regarding the engine) were revealed during the trials, but overall the tests were considered successful. By June 1958, the plant was ordered to build 3 more prototypes for the military to test on polygons. These were designated “Object 430-1*P, 430-2*P and 430-3*P”. These prototypes were ready in December 1959 and were tested thoroughly in two stages from March 1960 to May 1961.

In the end, based on the trial results, the Object 430-2*Z and 430-3*P were selected for development and mass production recieved new designations of “Object 430M-1, Object 430M-2″. That was, however, not meant to be.

The result of the testing committee was, that while all the development program goals were met and Object 430 is essentially ready for serial production, it does not represent much of an improvement over the T-54. Furthermore, other experimental tanks (Object 165 and Object 166 – otherwise known as T-62A and T-62) also passed the tests by that time, but their advantage was that some of their parts were unified with the T-54. Therefore, since there was such a reserve in T-54 improvement potential and since Object 430 didn’t represent that much of an upgrade over the T-54, the project was cancelled on 17.2.1961. The intended “T-64″ designation was then passed to Object 432.

We will compare this tank to the T-62A, its direct tier 10 competitor (data in brackets will belong to T-62A).

Object 430 seems to be better on the paper in most respects than the T-62A, so I assume we can expect some nerfs in the game, compared to its real life characteristics. When talking about this vehicle in the past, SerB mentioned a horribly unreliable “one hitpoint” engine, so I assume we can expect something like that to be the vehicle’s weakspot. Either way, this tank will probably play much like the T-62A – why the developers would decided to implement yet another such tank, I have no idea. 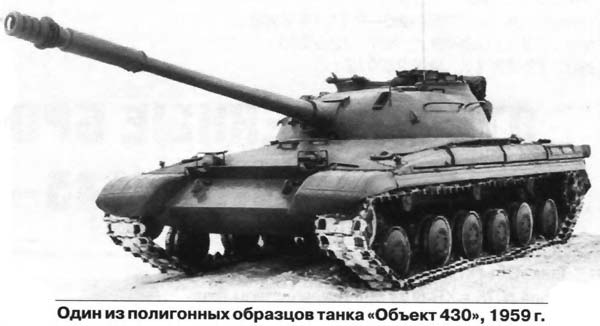