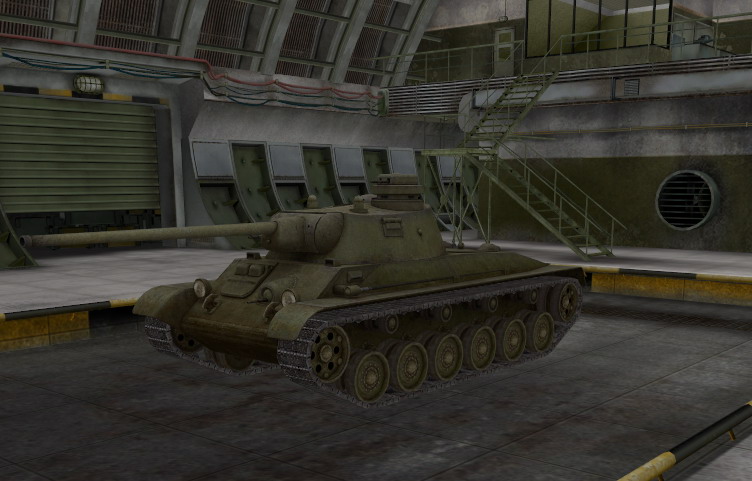 the A-43 (or T-34M, as it is also known) is the upcoming tier 6 medium tank in the World of Tanks 0.8.8 patch – so let’s have a look at him, shall we? First, official Wargaming tank description (that was leaked earlier):

Developed in 1941 at Plant No. 183 under the designation A-43. A new vehicle was intended to replace the T-34 tank. The vehicle was to be equipped with torsion-bar suspension, diesel engine V-5, a new transmission and a reinforced to 60 mm front armor.

As the name “T-34M” (and the general shapes of the vehicle) might suggest, the story of this tank prototype starts with the original T-34 Soviet medium tank.

The thing was, for all its advantages, it had a number of serious flaws. One of them was the vertical spring suspension, that had trouble coping with the 30 ton vehicle (let alone later even heavier models). Torsion bars would have been a much better solution – a thing the Soviets themselves did realize, they however also realized that such a conversion would require massive hull re-work.
Nevertheless, the order to convert the T-34 to torsion bars suspension was given in October 1940 – the vehicle recieved the designation “T-34T“.

The initial idea was that the torsion bar suspension would be adjustable and usable even for already produced vehicles, but that hope was not fulfilled, the hull simply couldn’t have been easily adapted. That’s why another decision was taken: to create a completely new medium tank with torsion bar suspension, which would share only some parts with the T-34. The project was redesignated “A-43” and the development was to take place in the Plant No.183 in Kharkov.

It is also suspected that when designing the A-43, the developers had a close look at the Panzer III and simply implemented some of the German solutions in it. Specifically, the A-43 was designed to have some reserves, so it could be modernized in time. Mobility also played an important part. However, the A-43 was an original design and by no means a copy of either Panzer III or T-34.

The design works on the A-43 began in January 1941. The vehicle was longer and higher, but narrower than the T-34 and its clearance was improved by 5cm. A new variant of the V-5 diesel engine was specifically developed for the A-43, with increased horsepower (600hp) and increased capacity of fuel tanks. The transmission remained the same (4-speed), but it was supposed to have a reduction, so the handling of the tank would improve. As a result, the A-43 had 8 gears for forward driving and 2 reverse gears.

The suspension was also changed a lot – instead of 5 big roadweels, 6 smaller doubled roadwheels were used, each with individual torsion bar suspension. The track width was also changed – in fact, the A-43 tracks are narrower (450mm), resulting in somewhat bigger vehicle ground pressure.

The interior was also changed (compared to the T-34). The driver was moved to the right side of the hull and the radioman/machinegunner to the left. The A-43 was supposed to be equipped with a new 3-man turret (1700mm turret ring diameter), equipped with the commander’s cupola.

The weapons of the vehicle wouldn’t change from the T-34 though, the tank was to be equipped with the 76,2mm F-34 gun (I assume we’ll see that as the stock version). The only additional armament was the addition of the portable PPD machinegun to the interior. It’s an interesting fact though that the designers apparently counted on the fact that there would be a flamethrower version eventually developed, because they did consider the installation of a flamethrower instead of the frontal machinegun.

Despite all these improvements, the vehicle was actually one ton lighter than the T-34 and its maximum speed was estimated to be 52-55km/h.

The preliminary project of the A-43 (at that point, it was still called T-34T) was presented to the committee for mock-ups in January 1941. The project was accepted warmly – in fact, it was liked very, very much. There were only two demands: one was to increase the frontal armor to 60mm and another was a different (planet) transmission. These demands were met and in February 1941, the project was officially approved by the People’s Commissariat of Tank Industry (NKPT). However, more demands (aimed at simplifying the production of the vehicle) were brought up soon after. One of them was to reduce the curves of the vehicle (in favour of sharp angles) and to replace the old welded turret either with a new welded turret (that was simplier to manufacture), or with a cast turret (designed by V.Buslov), that had 52-50mm thick sides and a hatch in commander’s cupola. These demands were also met.

In March 1941, the tank was officially renamed to T-34M and the construction of two prototypes was initiated (later increased to the initial batch of 6 vehicles). In the meanwhile, it’s worth noting that the Soviets also ran an experiment, where they (somewhat crudely) converted one T-34 mod.1940 to torsion bar suspension. This experimental vehicle, called T-34T (once again) performed about the same as the regular T-34, but the ride was smoother.

In the meanwhile, through April and May 1941, various parts of the prototypes were completed, including several new suspensions in one factory and the new pressed-welded armor turret in another (5 pieces were prepared). Three partially finished hulls were also prepared by that time.

Despite all the efforts however, the plan to create at least one functional prototype until the evacuation had failed. The main reason was the trouble with the new V-5 engine – mating it with new transmission (as requested earlier) took time and while it was supposed to be done by May 1st 1941, the Plant No.183, responsible for the conversion, pushed the date to 25th of July.

And so, by the time the Germans invaded, none of the six vehicles reached at least the state of 70 percent completion. According to some sources, some parts were evecuated with the rest of the plant (turrets and some hulls, but no transmissions or engines) to Nizhny Tagil, but the development and production could not continue: the army demanded mass production of inferior, but readily available T-34 tanks and there was no capacity left for the T-34M project – and that was the end of it.
It is not officially known, what became of the parts that were evacuated, but some sources state that the turrets and perhaps even the hulls were used as parts for the regular T-34 construction. Other sources claim they were scrapped.

Since the T-34M will be directly competing with the T-34/85, we will compare the two vehicles. The following table will take the ingame values of the T-34/85 and compare them to the historical T-34M. The T-34/85 values will be in brackets.

I guess we can expect the T-34M to have better viewrange and better accuracy when moving (smoother suspension). Thanks to its lower weight, it will probably also be more mobile. The armament will apparently stay the same, but the T-34M might not recieve the T-34/85′s top gun as a mobility tradeoff. Overall, it should be quite a nice and mobile vehicle to play with.