in recent Q&A, SerB was asked about the machine, mysteriously known only as the “Gavalov tank”. SerB answered that this tank could be tier 6/7 Soviet light tank (not that it will, it would just be on that tier). After a quick search, I found the abovementioned article, which I will summarize here. 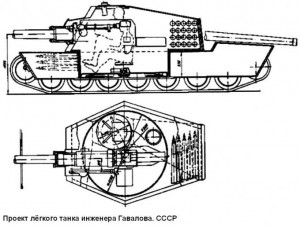 The light tank proposal from I.V.Gavalov (an engineer of some renown, he worked on several light tank designs, including the T-70) is an attempt to combine the concept of a light tank with a powerful gun. In an effort to make the vehicle more stable and easy to drive, the driver was moved to the turret and his seat was “stabilized” in order to compensate for the vehicle movement.

Despite the fact that in second half of 1943 the light tank projects were mostly stopped, some plants continued their light tank development. And so, in 1944 in the Gorky plant, I.V.Gavalov developed this technical project of a new tank.

As mentioned earlier, the driver’s seat was “stabilized” – when the turret turned, the driver stayed looking forward – this was possible thanks to a special chain transmission and the fact that the whole turret was “sitting” on the bottom of the tank on a pivot, not unlike the one of the anti-aircraft lafettes. Effectively, the driver was sitting on the turret axis and the whole thing rotated around him. The driver was also sitting above the rest of the crewmembers, looking out via a roof-mounted periscope, which was also stabilized.

As for the armament,in player-suggested trees, this tank is equipped with either a 57mm ZiS-5, or 76,2mm ZiS-4 and S-54 and characterised as a small, fast vehicle. Historically, it was to be equipped with a long-barelled 76mm gun and a machinegun. The vehicle was supposed to be 1,3m tall, 4m long and was supposed to have 7 large roadwheels. Armor was most likely probably non-existent. Altogether, when talking in game terms, it looks like a Soviet version of AMX ELC.

Since the same plant focused on light SPG vehicles (SU-85A for example) in the war, this light tank was only further developed after the war, eventually leading to the T-100: 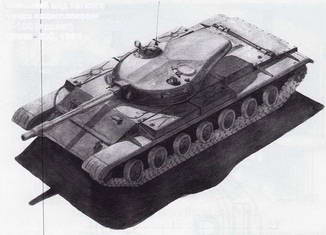