in this short last part, we are going to have a look at one of the most interesting Panther designs, the Sturmmörser Panther. 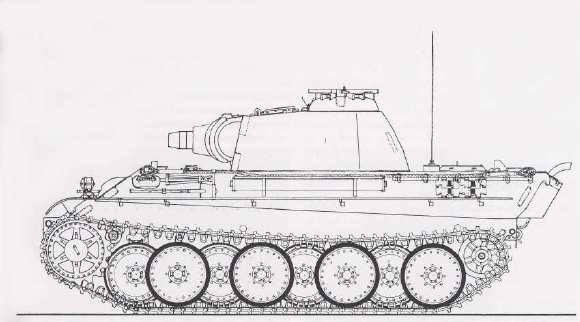 Basically, what happened: if you did read part II of Special Panthers series, you might have noticed a trend to use the Panther chassis for an artillery vehicle. But what about the Sturmartillerie?

Direct fire support high-caliber vehicles with proper armor and short, but heavy armament were in high demand in the German army, especially in the east. Such vehicles are quite useful when assaulting heavily fortified positions, or during city combat.

One of the ideas to convert a Panther into such a vehicle was to replace its main armament with something heavy. On 18.3.1944, there was an official demand (apparently from the Heereswaffenamt, along with WaPrüf4) to mount a 210mm mortar (of an unspecified type, but most likely a newly-developed weapon, not the French Beutemörser, which were considered years earlier for other platforms, but something like the 21cm GrW 69 “Elefant”, designed before 1944?). Krupp responded and on 23.6.1944, its representative handed over a first draft of a 150mm assault mortar (Sturmmörser) with the StuH 43/1 150mm gun mounted within the Panther turret (a modification of the gun the Sturmpanzer IV “Brummbär” used). The vehicle was to have new rangefinder, commander’s copula from the Tiger tank and optics intended for Maus.

In July 1944, Krupp was informed that all the development of heavy and superheavy weapons (including the Sturmmörsers) is to be stopped. A wooden mockup was made nevertheless and presented to Guderian. This still didn’t save the project – after August 1944, the work on it slowly halted and it was definitely scrapped around September 1944, including the 210mm variant.

Alkett was working on such a thing simultaneously, but preferred a Sturmgeschütz chassis (StuG III).

There is one more interesting project, completely unrelated to World of Tanks however: the Raketenwerfer Panther::

It was basically a Škoda (Czech) developed 105mm multiple rocket system, mounted on Panther chassis, using a 88mm FlaK mount. As far as I can tell, it never left the drawing boards.