today, we are going to have a look at some of the weirdest (but most interesting) Panther variants there were. Most will come from W.Spielberger, so the info is as solid as it gets – no fakes here :)

The Panther is the ultimate medium tank of the Second world war. Despite being plagued by its own problems, it was a perfect blend of mobility, armor and firepower. Where other famous mediums lacked quality and made up for that by sheer numbers, the Panther was facing the opposite problems. There were simply too few. Despite the fact there were never enough Panthers around however, a number of interesting projects and upgrades were developed for the Panther chassis.

Obviously, thanks to the game, everyone noticed the Schmalturm – the “narrow” turret for the Panther. This was of course a real project, but the 75mm L/100 is… well, semi-real. In early 1943 (January, in fact), Hitler demanded this gun to become the Panther armament. At that point, the gun was not even developed I believe (long barrels have problems of their own – most notably the vibrations, in fact reducing the gun accuracy, they are also very expensive and notoriously difficult to make) and nothing came of it. But, it was proposed. What WAS however developed, was the Panther with autoloader. Basically, Škoda Pilsen developed an autoloading mechanism for the Panther KwK 42/2 (to be ready in April 1945) – so yes, Panthers with autoloaders could roam the battlefields of WoT one day. This is sort of conencted with SerB’s remark that eventually the E-50 and E-50M might merge, with the “Turbopanther” jumping to tier 9.

This is how the ultimate Panther (last historical Ausf.F) was concieved: 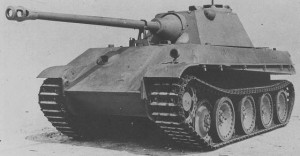 Following upgrades were also considered for the Panther:

What’s a “Turbopanther”? Well, what we can guess is: the ultimate Panther with various steering mechanism and drivetrain upgrades, sporting the heavies weaponry historically concieved for Panther (88mm L/71 in a Schmalturm), equipped with the GT-series gas turbine, giving it roughly 1200 horsepower to run around with. In real life, the turbine had a number of drawbacks and serious flaws, but in World of Tanks, it could work. Could work.

I will sort of skip the scout tanks, because there were only two models – the recon Panther (that is in the game), if you are interested, I wrote about its history earlier here. There is one more thing: an artillery ranging vehicle on Panther chassis. You can read about it in the article I linked, but basically, it was a Panther with all sorts of ranging equipment and a dummy gun (or a 50mm one), used to direct artillery fire. This is how it looked: 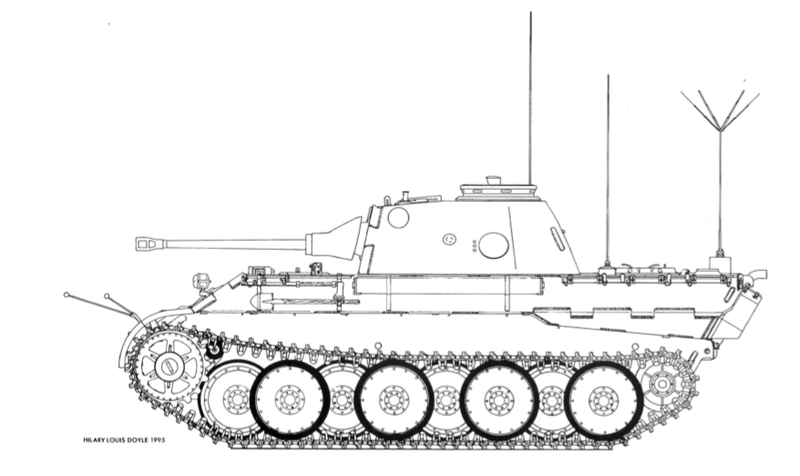 I will also skip the AA vehicles, as they have very little chance of appearing in World of Tanks. Earlier, I kinda thought one of the AA Panthers would make a cool scout (twin 37/55mm or so), but I guess we can’t really expect that, can we. Anyway, this is how it would have looked: 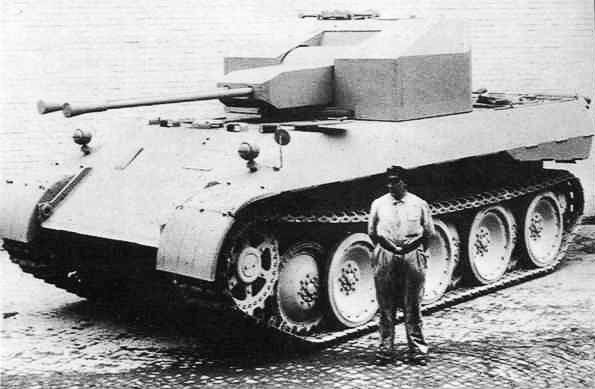 Now, however, we are getting to the interesting stuff: the self-propelled guns and tank destroyers.

Let’s start with the Jagdpanther. An 88mm with autoloader (PaK 43/3, 3 or 5 round drum autoloaders) and 128mm guns were both considered for the Jagdpanther (it was announced by Krupp during the November 1944 “tank re-arm” program proposal). The 128mm Jagdpanther was also considered (12,8cm PaK 80 L/55 that is). Doyle states that this vehicle would weight roughly 51 tons and would have to switch to the rear casemate design. Basically, it would be extremely uncomfortable for the crew and its performance would be limited by that. This design (along a bunch of others) was scrapped in February 1945 by Waffenprüfamt (German weapons testing office). Here’s how it would have looked: 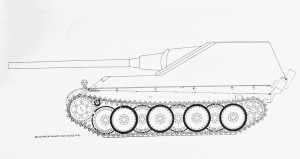 Note that this design has nothign to do with the Jagdpanther II, it only adopted the rear casemate solution. By the time this vehicle was introduced, both Panther II and Jagdpanther II projects were long dead.

Part 2 will deal with the Waffenträgers, Panther artillery pieces and the 150mm Sturmmörser Panther assault mortar.

57 thoughts on “Special Panthers – part I: Panther and Jagdpanther”