this article starts where part 1 left off – today, we are going to have a look at the Waffentrager Panther, that is to appear in 8.9 (or…. is it? “Some say” there were some changes in the branch. Sorry, no details on that).

But first, let’s have a look back at the Jagdpanther II, because last article left some questions unanswered. So, is it historical?

So, what about the ingame Jagdpanther II? Well, that’s sort of made up. It’s a mashup of two actual designs, with a healthy dose of WG invention. What Wargaming basically did was that they took this design as a muster: 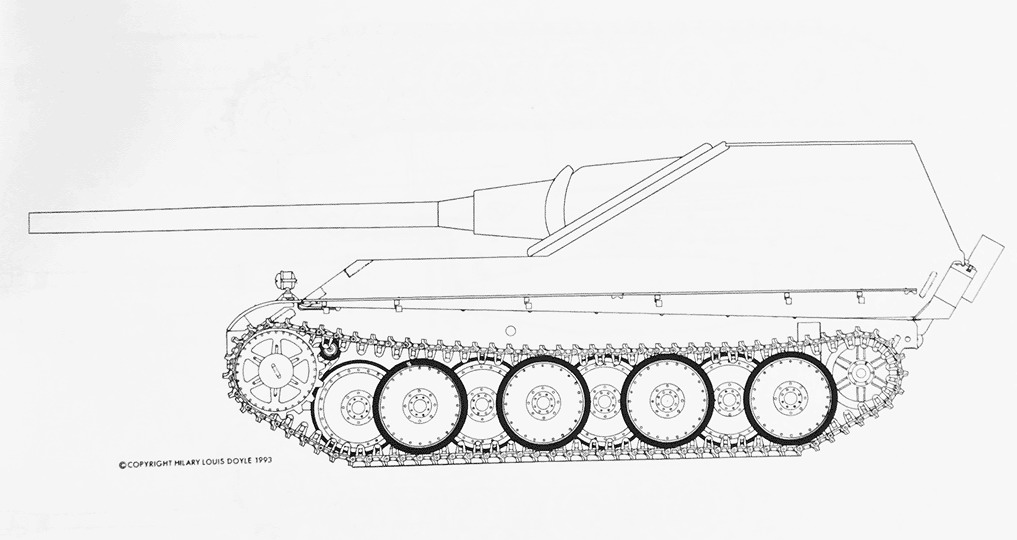 Yes, this is the 128mm Jagdpanther redesign by Krupp from late 1944 (I mentioned in part I). It was supposed to allow the Panther chassis to carry the 128mm L/55, but Doyle stated that it would be too heavy and unwieldly, weighing up to 51 tons. Wargaming took this design, renamed it to “Jagdpanther II” and switched the hull armor characteristics from Panther I to Panther II (mostly concerns side armor thickness). They strapped more armor on it and unhistorical engine and voila, Jagdpanther II is born. In other words: while somewhat logical, ingame Jagdpanther II is nearly completely made up and has nothing to do with the early proposed 88mm tank destroyer on Panther II platform. The 128mm gun was added for balance. I mean – I get WHY they did it, but it’s not historical. By the way, the wotwiki description says:

No. That’s not true. The Umbewaffnung project by Krupp from November 1944 was not called Jagdpanther II, it was simply “Jagdpanther mit 12,8cm PaK 80″. It also never sported the improved side armor (it had enough issues with weight as it was).

Okay, that took longer to explain than I hoped, back to the Waffenträger.

First, some basics. What’s a Waffenträger? A quick rundown: it’s (presumably mass-produced, but also ad-hoc) chassis with a (anti-tank) gun mounted on it, preferably a bigger gun than the chassis would normally carry, either “just so” with only a gun shield, or in a lightly armored casemate/turret.

In case of Waffenträger Panther, it would look something like this:

This is the Rheinmetall’s “Skorpion” proposal from 2nd April, 1943. Yes, this design actually existed in blueprints. So, is the Waffenträger Panther historical? Again, yes and no.

You might have noticed the “K43″ in the picture description. That is in fact the 128mm gun designation. Those who dabble in this sort of thing probably know that tank cannons were designated KwK, while AT guns were designated PaK. “K” simply means “Kanone” and it designates an artillery piece. That’s right – all the “Waffenträger” Panther designs were designed as artillery vehicles. It’s worth noting however that while the 128mm K43 was an artillery weapon esentially, 128mm K44 L/55 was practically identical with the Jagdtiger weapon (PaK 44 L/55).

There were basically two proposal branches for the Panther SPG’s: one by Krupp and one by Rheinmetall. The Skorpion was proposed by Rheinmetall as a SPG with fully traversable open turret (casemate and closed turret versions also existed). Krupp proposals were a bit different from the ones of Rheinmetall. One of them looked like this: 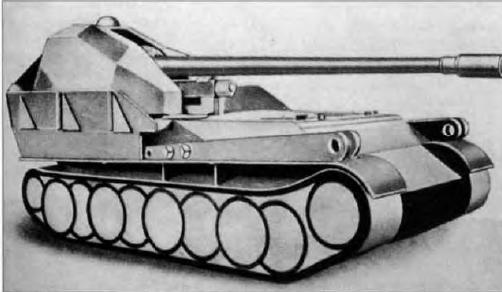 Is the shape familiar to you? Yes, that’s the ingame GW Panther proposal. In real life it was called “12,8cm K. 43 (Sfl.) Kp.II”. It was originally supposed to carry the same gun (K43), Wargamming upgunned it to a 15cm gun, based on other Krupp Panther SPG proposals.

Back to this “Waffenträger” then – it is clear that any such vehicle ingame would be a actually a re-worked artillery pieces. What does that mean for the game? Not much really, apart from the fact it’s not very realistic (therefore, it’s a prime candidate for replacement for something… more historical). Are there any other historical vehicles to replace tier 8 and 9 with? Well, yes, but that is a story for another time.

Short history of these “Waffenträgers”:

The work on self propelled arty pieces based on Panther chassis started as early as July 1942 and was basically (as mentioned before) conducted by two different companies, producing competitive designs (that’s how Germans liked to do it: there were always two designs for each program, take Maus/E-100 or Porsche/Henschel Tiger as an example).

Krupp started to work on the Waffenträgers by producing a 150mm and 128mm designs. Here we can see the 150mm design, called Gerät 5-1528 (picture courtesy of Zarax): 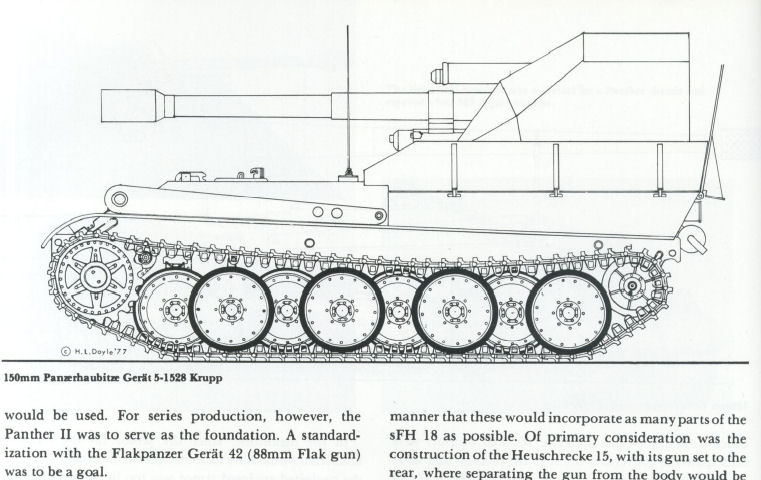 The vehicle had extended Panther platform hull and a fully traverseable turret with a 150mm sFh 43 gun – it was designed based on the Russian experiences. The 150mm variant was to be called Heushrecke 15, while the 128mm variant Heushrecke 12 (as you can see, even the names scream “artillery”, not a self-propelled TD gun). Another two variants were designed and named Grille 15 (150mm gun) and Grille 12 (128mm). Wooden models were ready in January 1943. The prototype vehicles were supposed to be ready in September 1943, but in April, it was decided to produce only one prototype of Grille 12/15 (its mockup is on the picture I linked as GW Panther above) and in May 1943, both the Heuershrecke 12 and 15 were cancelled. In the meanwhile some work on the Grille 12/15 continued. However, as with many German late war projects, the war needs intervened and the Grille 12/15 was eventually cancelled in late 1943.
From early to mid 1944, Krupp (along with Waffenprüfamt 4) proposed (out of its own initiative) a bunch of other SPG proposals (with removable weapons, that could be dismounted and used separately from the vehicle actually), but nothing really came of it, mostly because there weren’t any spare Panther hulls around for such vehicles to be constructed on. One of the late Krupp proposals from September 1944 was actually called “mitteler Waffenträger” (here we see the word used for the first time, when it comes to SPG’s), but it was still basically an artillery piece.

The most complicated parts of the Krupp designs were the ability to remove the howitzer and use it as a towed piece (for whatever good that was, late in the war, towing vehicles were at premium, with German troops being actually forced to abandon perfectly good guns simply because they had nothing to tow them with, this being the principal reason behind the Waffenträger concept) and the rotating turret. Late in the war (early 1945) there was another 128mm K44 concept, simplified without these features, but by that time it was way too late for anything and the war was practically over. Thus, none of these designs made it beyond the drawing board (or wooden mockup).

Just like Krupp, Rheinmetall began in July 1942 to make their own proposal for Panther-based artillery pieces. They produced a bunch of designs in January 1943, using 128mm K43 and 150mm guns. They all looked like the abovementioned Skorpion, they had revolving turrets. This is how some of them looked (from above: 12,8cm K43 Sfl from January 1943, 12,8cm Skorpion from April 1943, 15cm sFH 43 mit Panther Bauabteilen from April 1943 and sFH 18 mit Panther Bauabteilen from January 1944) 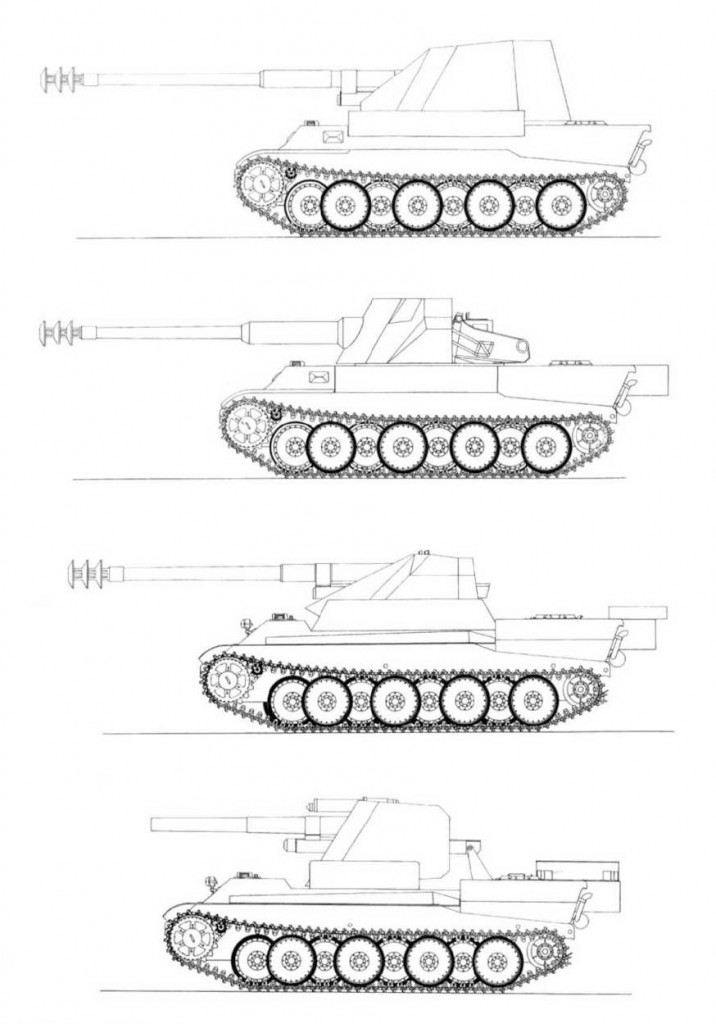 Long story short, these designs suffered the same fate as the Krupp ones. Bunch of them were developed, but they never progressed beyond mockup stage, because there were no Panther hulls available.

So, this is it, the story behind Waffenträger Panther. There will be part 3 – the Sturmmörser Panther, that will be fun and I promise it will be shorter.