once upon a time, when the trees were still vertical, the T-54 was overpowered and SerB still had hair, there was an old version of the tech tree, that had the T-46-5 (T-111) tank in it on tier 4: 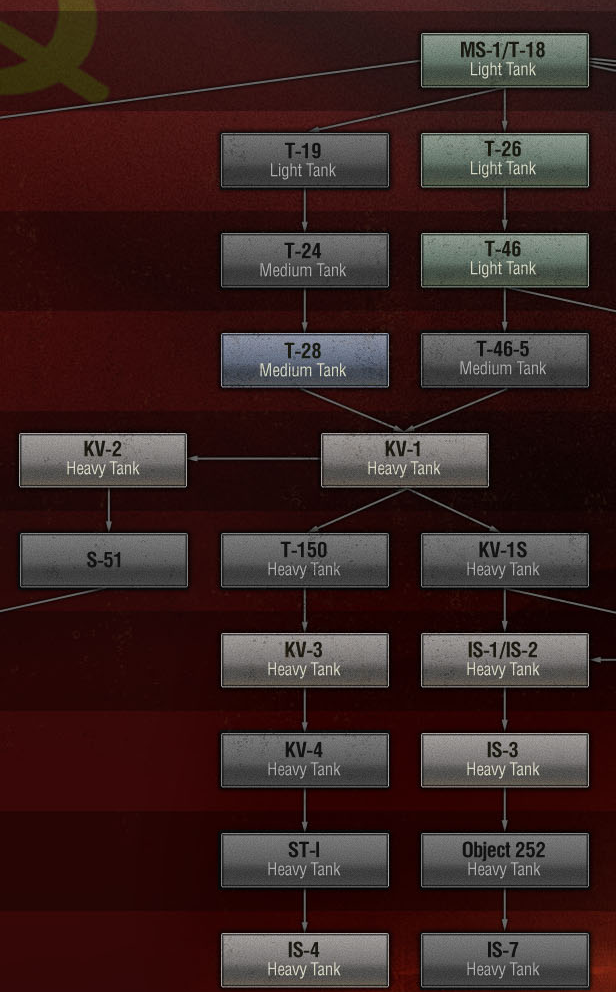 The trees have gone horizontal, T-54 was nerfed and SerB is bald now, but apparently, the vehicle was not forgotten. SerB confirmed today that it’s going to get implemented at some point, so let’s have a look at this little tank.

The T-46-5 was an experimental light infantry tank, designed by the Leningrad (St.Petersburg) Kirov Plant No.185 in 1936.

In the beginning of 1936, by the time the T-46 light infantry tank was being developed to replace the aging T-26, the renowned Soviet tank designer S.A.Ginzburg (later reponsible for example for the T-50 or SU-76 SPG) decided to design one more vehicle of the same class – it was his own initiative. In his letter to the chief of the ABTU he stated, that the BT and T-26 light tanks no longer meet the modern battle requirements. He emphasized the fact that these vehicles are no longer adequately protected and are basically vulnerable even to small caliber fire (including artillery). Furthermore, he pointed out the fact that foreign tanks (unlike the early Soviet designs) are much better armored and often have sloped and anti-artillery armor, which gives them an advantage. He also stated that it was his belief the Red Army doesn’t really need the T-46, because he considered its uparmoring not sufficient and according to him, the vehicle was only “half-baked”. Finally, he proposed the Red Army to be equipped with an “universal tank”, with following characterstics:

To this letter he also added his preliminary project for a “Infantry Support Tank Model 1936″ (Tank soprovozhdenija pechoty obr.1936 g.), however no details on this proposal survived, except for some brief indirect descriptions. Basically Ginzburg took the same principles the T-46 was built on, equipped the vehicle with 30-35mm sloped armor, MT-5 diesel engine producing 320hp and removed the ability of the vehicle to go around without tracks (the same ability the ultra-fast BT series had). It was armed with the 45mm 20K gun and three DT machineguns, mounted in a conical 25mm-thick turret, which he “borrowed” from the T-46-1 design.

The abovementioned project was never made as a prototype, but in 1936, the experimental T-46-3 hull was constructed. This hull had 30mm thick sloped cemented armor, that was to be connected by welding, but there were problems with that, so in the end, it was decided to make the hull riveted. After that it was tested. The results of the tests are unknown, but in the end, it was ordered to make a second hull from 40-45mm thick plates.

Based on the experience and data gathered from the abovementioned tests, Ginzburg started to develop a new light tank he designated T-111 (or Object 111). This project was sometimes referred to as T-46-5, but the T-46-3 and T-46-5 were very different, they had almost nothing in common and the only thing that tied them to one another was the name.

As soon as the project was started, there was immediately a delay of one year, because the chief designer was under investigation and couldn’t work on it. Only in winter 1938, when some of the Red Army leadership changed was he allowed to continue, but the requirements changed now – the vehicle was to have 60mm armor instead of 45mm. 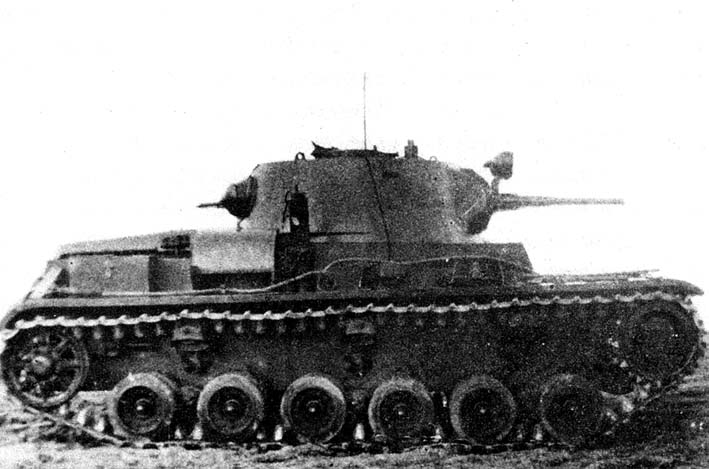 The T-111 prototype (picture above) was made in April 1938. When developing this vehicle, Ginzburg obviously drew from both the T-46 and his own “1936″ infantry tank, with both influencing how the vehicle looked. The hull was made from rolled armor plates 20mm (roof and bottom) to 60mm (frontal armor) thick. The driver sat on the left side and there was a radiostation was next to him. The loader and commander were behind them. The vehicle was propelled by a 300hp MT-5 diesel. The turret was 50-60mm thick and armed with the 45mm 20K gun, which was linked to a DT machinegun. One more such machinegun was installed into the rear side of the turret.

The suspension was changed too, with 3 doubled roadwheels on torsion bars and three support wheels. The tracks were new too – 500mm thick, but the ground pressure remained roughly the same as on the T-46. 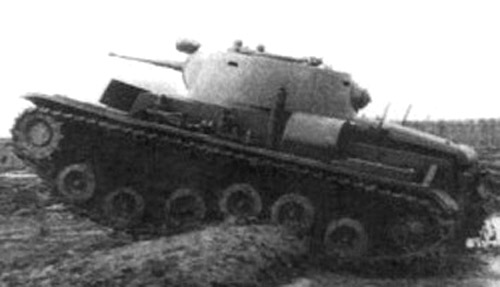 The prototype was tested in Spring and Summer of 1938, but left the testers with mixed feelings about it. On one hand, the armor withstood the fire from 37mm and 45mm gun AT guns and even the 76,2mm field gun shell impacts. During movement and passability trials, the vehicle proved to be faster than both the T-26 model 1939 and BT-7, while keeping roughly the same terrain passability.

On the other hand, the power of the 45mm gun was clearly insufficient to defeat potential enemies, such as Panzer III or FCM 36). One solution was to equip the vehicle with the newly developed PS-3 gun, but its designer was arrested and all the prototypes were sent to be melted down as a result. Another proposal was the 76mm L-10 gun, which was however almost too big for the turret and its performance was thus very low. In the end, it was decided to keep the 45mm, as it could defeat most contemporary tanks anyway. 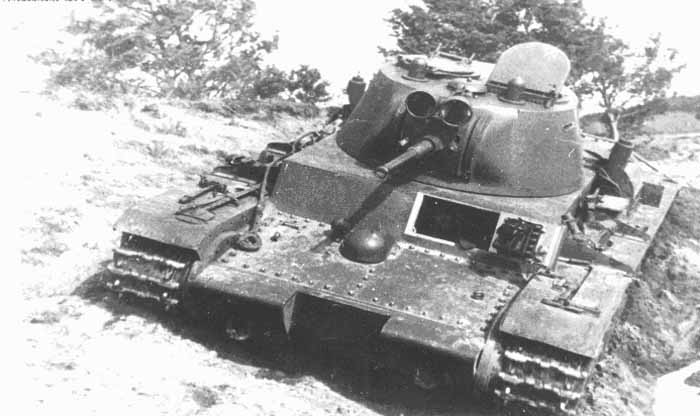 There were also problems with the engine and its drive. The whole system was basically designed for the original weight of 18 tons, but because of the additional armor and other improvements, the vehicle now weighted 32 tons. The 300hp engine also had issues with moving such a heavy vehicle, resulting in low reliability and agility of the vehicle.

The developers tried to fix all these problems, but ultimately they failed. They tried to implement a new engine (DTM-8, 400hp), but it wasn’t ready back then and there was simply not enough time to rework the unreliable transmission. Despite all that, the Kirov plant was ordered to produce an initial batch for further military trials in 1939 – however, by that time, the gun was considered too weak and the vehicle manufacture process too primitive to actually put any more time in it. Clouds were gathering over Europe and it was clear that in the future, more powerful vehicles (such as the T-34) would be needed.

The project was abandoned in 1939 for the abovementioned reasons and replaced by other projects, for example the light infantry tank T-126. The prototype was actually sent to Kubinka museum immediately and it remained there until the desperate days of 1941, after which the traces of it disappear.

When comparing it to the ingame (!) T-28 – well, both are medium tanks. The T-28 would clearly be more mobile with much better power-to-weight ration, which the T-46-5 has around 9,3 hp/t (12,4 with a 400hp engine, compare that to the 25+ of T-28). However, the T-46-5 is much more armored. 60mm lightly sloped armor vs 20-30mm of T-28 armor would make it the Soviet AMX 40 (which in fact will probably accurately describe the ingame performance, even though the “duck” is even MORE armored and less mobile). Gun-wise, the T-46-5 will be pretty bland, with classic Soviet lowtier 45mm/76mm option. The PS-3 gun could be interesting, but I haven’t been able to find its ballistic characteristics.

Either way, this vehicle could be fun. Well armored, with lower, but sufficient mobility and with a decent gun, it could give the T-28 a run for its money.