The famous Tiger tank wasn’t created in a day.

Its roots can be traced back to January 1937, when Wa Pruef 6 asked Henschel to develop designs for a 30 ton tank armed with a 7,5cm cannon.

The design specified a 30 ton tank with 50mm armor all around, pushed by a 300HP MB HL-120TRM to a maximum speed of 35km/h and the 75mm L/24 cannon.
Turret ring was 1500mm, close to Panzer III specs meaning it could accept pretty much the same turrets and guns.

Krupp redesigned the turret to be compatible with minor changes with both VK 30.01 and its heavier cousin the VK 65.01 just by increasing armor thickness, while the armament for now was still the 75mm L/24 howitzer.

By 1941 however this was quickly becoming obsolete, so up-gunning attempts were considered.
At first a 7,5cm L/34,5 was considered, but Krupp replied it couldn’t be mounted without extensive turret modifications.
The 5cm L/50 or L/60 could be considered instead, as modifications required were quite less demanding.

The conical 7.5cm Waffe 0725 was proposed but discarded as it couldn’t be installed as well.
By December 1941 Krupp figured out a way to fit the 75mm L/43 although with some ergonomic difficulties for the commander, while on January 1942 they replied the 7,5cm KWK 44 could be fitted only with numerous design difficulties and what basically amounted to a turret redesign.

All in all, the project was stopped because it failed to offer a valid improvement over the now battle tested Panzer IV and the design itself was becoming outdated and difficult to upgrade.

Developed in parallel to the VK 30.01, VK 65.01 was to be a heavy breakthrough tank.
The focus was put on protection, with armor upgraded to 80mm all around to give protection from 5cm cannons, while top speed was lowered to 20-25kmh.

The turret was to share components and general design with D.W/VK 3001, only with thicker armor.
In January 1939 Krupp proposed 3 different guns for the tank: the basic 75mm L/24, a 75mm L/40 and a 105mm L/20.
75mm cannons were preferred due to better performance against bunkers and easier to store ammunition.

The tank was to be truly massive, with a hull that had to be dismounted in 3 pieces in order to fit railway profile.
A Maybach HL224 engine rated 600HP was chosen as power plant,  pushing the 65 tons tank at 20kmh.

The project was scrapped after the defeat of France because of bridge restrictions and because Wa Pruef 6 felt that tanks above 30 tons were operationally of limited use.

In june 1940 specifics for a 30 ton class tank were laid, including a 10,5cm cannon as main armament.
Later on, the need of a high penetration weapon resulted in the proposal of mounting the Konical 7,5cm Waffe 0725.

The turret deserves a bit of attention on itself:

In 1939 a turret with 100mm armor mounting a 10,5cm cannon was developed, for a speculative design called A.W., Artilleriewagen.
Unfortunately no design specs survive other than the fact it would have been in the 80 tons class.
As tanks over 30 tons were deemed unsuitable for army needs, the panzer design was scrapped, while Krupp was asked to adapt the turret design (now finalized to use the 10,5cm LEFH 18) to the D.W. chassis.
This was achieved by reducing armor to 80mm front and 50mm sides, with an 80mm thick mantlet.

The D.W./VK3001 was then redesigned to take this improved turret, with increased weight to 36 tons.
The initial design called for 80mm frontal armor, 50mm side armor and was powered by a 450HP Maybach HL 174 engine.

Requests for up-armoring came up soon enough and the design was brought to 100mm frontal armor and 60mm sides, bringing the tank up to 40 tons.
Tungsten shortages brought the project to a halt, especially as the turret ring couldn’t support the 88mm L/56 gun, making development switch priority to the larger and heavier VK 45.01 design, the well known Tiger.

This wasn’t the death of the plans though, as in 1942 the 7,5cm L/70 was proposed for the design along with the Tiger and VK 30.02, although after this details are lost in Tiger’s development.
The only produced VK 36.01 chassis ended up as towing tractor, while the 6 turrets produced for it became part or the atlantic wall. 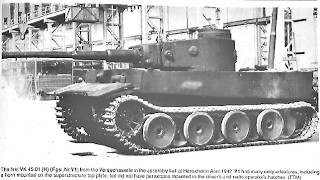 In May 1941 Henschel was awarded a contract to redesign the VK 36.01 chassis so that it would house a turret suitable to mount the 8,8cm KWK, already developed for the Porsche chassis.
The redrawn specs brought the project to 45 tons, with many components taken from the VK 36.01, while side armor was raised to 80mm. 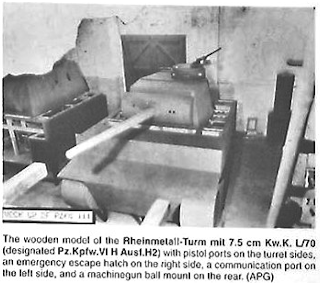 In April 1942 the first conceptual drawings were made by Henschel for an upgraded VK 45.02 (H) Tiger mounting an 88mm L/71 cannon.
At first as many automotive components as possible were taken from the VK 45.01 (H) and together with Krupp a turret for the 88mm L/71 was designed.
In February 1943 Henschel was ordered to redesign the tank in order to maximize compatibility with Panther components.
This project was called VK 45.03 (H) Tiger II.

At the same time, Speer requested compatibility with the newer Panther II project, resulting in the VK 45.03 (H) Tiger III proposal, sharing transmission, drivetrain and the Maybach HL 230 engine rated 700HP, where Panther II would use 7 roadwheels, while Tiger III used 9.
In all these early drafts the hull chassis was set to 100mm armor sloped at 50°, with Guderian mentioning a proposal to bring it to 120mm.

Hitler himself gave the final specs armor specs, declaring the frontal armor should be 150mm, while side will be set to 80mm.
In the end, the winner new Tiger would be the Tiger III (renamed as Tiger II), with the initial turret taken from the Porsche VK 45.02 (P) project. 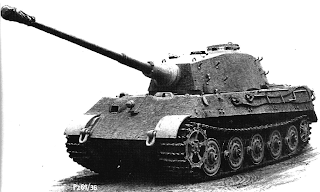 The first 50 Tiger II hulls were coupled with the turret left from the VK 45.02 (P) development.
The rounded shape, while good for deflection, left a shot trap.

In October 1942 it was considered possible to start serial production in September 1943, however troubles in incorporating Panther II parts meant the first Tiger II was delivered only in November 1943.

From October 1943 to May 1944 only 38 Tiger II were produced, while production was slowed down again in October 1944 by extensive bombing raids, resulting a total of 283 Tiger II produced by end of the war.

A few modifications did not reach the end of the war: 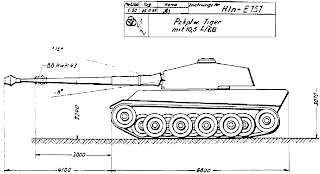 Beyond this, the E-series…

Which will be subject of a further article.

As you can see, from the Humble D.W. to the mighty Tiger II, Henschel produced a fine tank evolution.

I sincerely hope you enjoyed reading this and will meet you in our next article!

69 thoughts on “The long evolution of Henschel designs”