This is a purely speculative article that takes into account WOT German tech tree and uses historical tanks to speculate possible new tank additions. While trying to keep the articles faithful to history some room for inaccuracy is allowed within these rules:

1) No tank or tank part will be 100% made up, at least a mention about tank role and vague specs are needed

2) Components not planned for the tank are allowed, provided it wouldn’t create grotesque inaccuracies like putting a gun that would obviously cripple a tank under its weight

3) This will be limited to WWII plans, anything post war risks to be too arbitrary to properly balance

No serious expectation of anything listed to appear in WOT as described is applied, but as we’re discussing about implementing history into an arcade game some items will be controversial.

This is unavoidable as WOT tech tree rules need a tank to be better than the previous one and ergonomics are not exactly cared about, meaning that most designs are over-performing their real counterparts.

With the approaching Waffentrager tree, today we will see my personal take on the possible sturmpanzer tree.
SilentStalker recently had his own take on it, but I disagree on some choices and also prefer a shorter, more intense grind.

Historically sturmpanzers were basically direct fire artillery platforms, serving as mobile infantry howitzers or as assault guns depending on tank and situation.
Tactically conceived as a blend of artillery and tank destroyer later on specializing in urban fighting, they were very well described by Von Manstein:

The perfect root to start this tree in my opinion is the good old Hetzer. The first derp TD is a perfect platform to introduce the play style that will give character to most of the tanks in the tree, and is going to be followed by a derivative platform: A close Hetzer cousin, the tank was born out of the idea of coupling a 15cm S.I.G. to a bergepanzer 38(t) chassis.

Open top and with very thin superstructure armor ( sources vary between 20-30mm front and 12-20mm side), but likely sharing excellent camo with Hetzer coupled with  a good view range, this tank was planned to be around 16.5 tons and powered by a 150HP engine, for a decent 13HP/ton ratio, it’s likely it would share the same engines with its lower tier cousin, making the tank pretty agile as well.

All this awesomeness is in turn balanced by pretty poor ergonomics, as gun traverse was limited to 7° per side and gun depression to 2°. Ammo capacity was also limited to 15 rounds, meaning every shot must count.

All in all, we can expect a stock experience with the Hetzer 105mm howitzer and a similar stock engine, ending with the mighty 15 SIG, giving similar but likely even less accurate firepower due to a much shorter barrel.

The fierce battles around Stalingrad created the necessity to have an heavily armored assault gun.
In the urban context high muzzle velocity and long range accuracy were of little value, but armor was of the utmost importance. The resulting tank was a box-like superstructure on a Panzer III chassis.

Unlike its predecessor, the StuIG 33b was pretty well armored, with 80mm front, 50mm side and 15mm in the rear, which brought a total weight of 21 tons.
Ergonomics are again pretty restricted, with a traverse of a mere 3° per side as well as a gun depression of 3°.

Maximum speed is listed at 20kmh, although given weight and engine power it seems unlikely, so my personal suspect is that either the listed weight is wrong (likely and by at least 5 tons), or the speed is at least 10kmh higher than listed.

On the firepower side, we can expect stock the SIG 33, an intermediate upgrade to the SIG 33 model 1939 (slightly better aim time) and end it with the 15cm STUH 43, with improved accuracy.
Engine-wise we can expect the same selection as the STUG III, so no surprises there. As the Panzer III chassis proved to be inadequate for the fierce fighting around Stalingrad, the Sturmpanzer IV was originally born as a replacement for the Ferdinand Sturmpanzer variant (another awesome design, which planned to use a captured 22cm french howitzer).

A vast improvement over the StuIG 33b, the Stupa (as it was nicknamed by troops) was very appreciated especially by infantry, which often called upon them and also fought in a TD role at Kursk in support of the Ferdinands.

A decent 100mm sloped at 38° gives slightly better frontal protection than the mighty Tiger, while sides were 50mm at  15° and rear 20 at 10° so getting flanked is a pretty bad idea.
Top speed is listed at 40kmh, although 265HP for 28 tons gives a mere 9HP/ton, although we can safely estimate Panzer IV top engine will bring the ratio to a decent 15 HP/ton.

On the firepower side, stock we can safely expect the 15cm STUH 43 while upgrades here gets a bit tricky, as historically a very short 21cm howitzer was planned but would be impossible to balance at tier VII, so instead we could play with the 15cm SFH 13 L/13 (a short variant of the Grille top gun), which would improve accuracy.
Ergonomics are vastly improved though, so we can expect 7° traverse on each side and a decent 5° depression.

Nothing revolutionary from the previous tier, it’s still a decent answer to SU-152 and sports decent armor versus lower tiers.

Following Stalingrad, a new Sturmpanzer design was requested, this time on a Panther chassis.
Krupp quickly created a draft of a 15cm STUH 43 in a Panther turret, using Tiger’s commander cupola and Maus’ gun sight.

Panther’s chassis and turret were otherwise left untouched, so we can expect a fairly agile TD, with a turret nonetheless.
Upgrade-wise the same shortened 21cm howitzer as for the Brumbarr was planned, but of course it’s unlikely it would fit in a turret.

Here we have two possibilities: either we abandon the turreted chassis and we use the Jagdpanther-based proposal of which no drawings are available or we find a turret able to fit a bigger gun, not a schmaulturm for sure.

Luckily for us, a larger turret is available from the Waffentrager designs:

In this picture you can see the tank with the 15cm SFH L/29.5 howitzer which will be featured in the Waffentrager line (why wasn’t this design picked instead of overburdening the Panzer IV waffentrager or the fantasy WT E-100 is a mistery to me), something big enough to hold a long-ish 15cm or the mentioned short 21cm howitzer.

As there is no actual design mentioned, one could think it was basically a sawn off version of this baby, the 21cm Morser 16 (which would have been retired from main line use so in surplus): Such awesome firepower would be balanced by horrid soft stats, however in skilled hands this TD would be a truly deadly tank, although still an appetizer in firepower compared to what will follow. 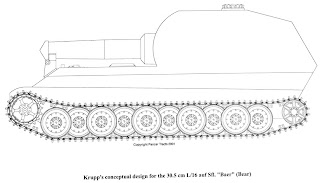 Awesome firepower comes with awesomely horrid sacrifices in every other area.

The Sturmpanzer Bar comes from a March 1943 requirement for a Sturmgeschutz able to mount a 305mm L/16 howitzer, two months later a conceptual design simply called Bar (Bear) was completed.
Planning to use a mix of Panther and Tiger components, this behemoth of steel would have weighted 120 tons, 8.2m long, 4.1m wide and 3.5m high.

Historically, the tank project was discarded on the same day as its completion, as Alkett/Henschel’s Sturmtiger plan proved to be much more effective and economical just at first glance.

Poorly armored at 100-130mm sloped front and 80mm side, the planned Maybach HL 230 engine would have given in an anemic 5.8 HP/ton, for a maximum speed of 20kmh.
Ergonomics were also rather poor, with 0 gun depression and a traverse of mere 2° on each side.

All of this would be compensated by the gun. A 305mm HE shell is more than enough to ruin even a super-heavy tank day, supplemented by an HEAT beton-grenate which would penetrate at least 300mm armor, for nearly guaranteed one-shot capability regardless of the target.

Still, this tank would represent a true test of willpower, a tank requiring the patience of an artillerist, greatly depending on proper positioning and good team-work.
After all, how good could be something discarded so quickly? 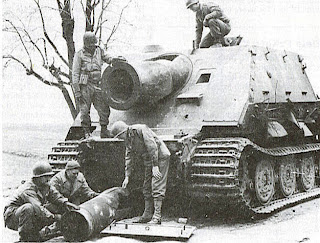 This classic steel beast needs very little introduction.
Coming from the very same requirement that resulted in the Bar draft, Speer himself contracted Alkett to develop a project to mount a 38cm marine rocket launcher on a Tiger chassis, after the earlier proposal of mounting a 21cm Morser 18 proved too heavy for the chassis.
Alkett initially proposed a rear casemate/frontal engine design which was quickly rejected, followed by a design of a frontal casemate with the 38cm launcher in a ball mount.

Frontal armor was 150mm at 47° with 80mm sides, lower front plate was 100mm often reinforced by an additional 50mm plate, not exactly stellar as top tier.
The MB HL 230 P45 engine gave it 700HP for 68 tons, which gave a power to weight ratio of  around 10 HP/ton, for a top speed of 40kmh.
Ergonomics are decent but nothing stellar: 0/ +70 gun depression and a traverse of 10 degrees on each side.

380mm with both HE and HEAT shells gives it the most devastating punch one could imagine, accuracy will be pretty abysmal though, worse than most howitzers (10m dispersal at 1000m, so in game something close to 0.8-1.0).

Awesome firepower requires extreme patience and skill to be properly used, imho the mid tiers will be the places where most fun is to be had.
Still, any of these babies in Himmelsdorf will be a sight to be feared!