In a recent Q&A (Friday the 13th’s) serB was asked if there was enough British heavies or mediums for a for a second Branch.

This is probably part laziness and part ignorance. I’m going to start a short series, explaining some of the additional branches that could rather easily be added (okay, some of them are a little more difficult than others, but it certainly isn’t doubtful)

During the harrowing fighting of 1941-1942, the British were in rather dire straights. The cost of design, development and implementation of various separate and distinct tanks had led to a number of problems in development. Everything from part standardization to manufacturing cost overruns led to a panic within the British army’s development process.

The British had several types of tanks, from the slow and well armoured and ponderous Infantry tanks, taking the form of Valentine, Matilda and the Churchills. To the faster and decently armed cruisers, Covenanter, Cromwell, Comet. They also built various forms of anti-tank type vehicles (featuring heavy guns) such as the Firefly, Challenger and Archer.

The idea was that simplified tanks could be made to replace the separate designs. This was not due to any actual doctrine change or belief that the separate tanks were not accomplishing their goals, but, rather simply, for cost. Combine decent speed, armor and a decent gun and work on producing 1 tank to save money. The line begins from the Cromwell, branching sideways onto the Excelsior.

The first tank in this line is the Excelsior. Two prototype Excelsior were produced.  The current premium, which uses the existing Cromwell tracks and suspension with stiffened springs and hardened components; the other used a modified version of the American M6 Heavy Tank suspension.

The entire concept of the excelsior was rooted in cost savings. It’s purpose was to replace the then plagued Churchill series of tanks. Uparmoring a functioning Cromwell to “infantry” level and having two tanks that shared at least some common parts would allow the British production to more effectively produce these tanks.

One could expect this tank to feature effectively the same upgrades as the Cromwell does, enjoying the same 75mm HV Vickers gun. Upgraded turret would be either an uparmored design of some kind, or at least a Cromwell MkVIIs’ which had 101mm of armor. The uparmored turrets reportedly had 114mm of armor, like the hull.

Known as a “heavier” version of the A33 (The Excelsior). It had an extra suspension bogie per side, and a slightly longer and wider hull(and an enlarged turret ring) It was supposed to feature a 17 pounder and had a weight of 52 tons.

Mockup of A37 done by “Slakrrrrrr(NA)” and edited by myself

There is a bit of conflicting information about its armor layout, although the main discrepancy was if the armor thickness was increased to match the Churchill or not (some sources claim 152mm (6 inches) of frontal armor, others claim 114, the same as the existing Excelsior) Given the expected weight, one could presume it’s frontal armor (at least along it’s upper front plate) should be the listed thickness of 152mm..

It’s fairly logical that the Comet’s turret (complete with gun mantlet) could be used as the top turret (with 77mm and 17 pounder as upgrade choices) You’d have a pretty comfy tank, 40kmph top speed, decent maneuverability with the 650hp engine, 17 pounder, a decent gun mantlet, 10 degrees of gun depression…

The A45 “Infantry Support Tank” began it’s life in 1944. Originally designed as a new infantry tank (as it’s name states) it was designed as effectively as an infantry tank. One could take a moment to look at it, and then take a quick look at the Centurion and would begin to see why this designation changed shortly thereafter. It had a similar armament, only a bit more armor and the same turret. 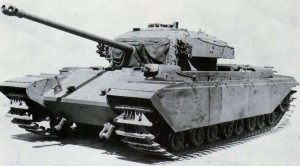 Some time shortly after it was built, a new project came about; the “FV200″ series of tanks were designated Universal tanks. The idea was, of course, that you’d have 1 universal chassis to do nearly everything. There was plans for a heavy and light TD (with 183 and 120mm guns, respectively) an AVRE tank, armored recovery, bridgelaying…

The FV201, particularly was designed to be a universal tank to replace both Infantry and Cruisers (effectively it was an infantry tank that could move as quickly as the cruisers). The development team and British engineers believed the Centurion tank was a failure as a Cruiser and considered this tank to replace it shortly after the Centurion was built. However, uparmored and upgunned variants of the Centurion actually killed off the project. The Chassis was retained and later used for Caernarvon and Conqueror. 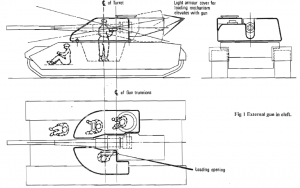 Mockup for the Internal Crew layout on the FV4201

Another great article on the last two, if you’re interested.

And basically, there, you’ve got a T6-T10 “Universal line.” I, personally consider them all “heavy tanks” at least by World of Tank’s conventions (weight and performance-wise). They’d be some of the most… “light” heavies in the game, decently maneuverable with average guns.

56 thoughts on “Commonwealth Uncommons – The Universals”