so, here are my subjective impressions from the new German TD line. Unlike the previous patch Soviet tanks, I think I am rather qualified to talk about German TD’s, as they are my favourite branch and I played it quite a lot. So, let’s have a look at it :) All tests took place with a 100 percent crew, camo net, binoculars and an optional third equipment piece. I used both silver and golden shells for comparison, standard silver consumables. I also used optical camo.

The server itself runs pretty smoothly (the bug with the packet loss was not fixed however). Noticed the nice quick server relog feature in upper left corner – handy! 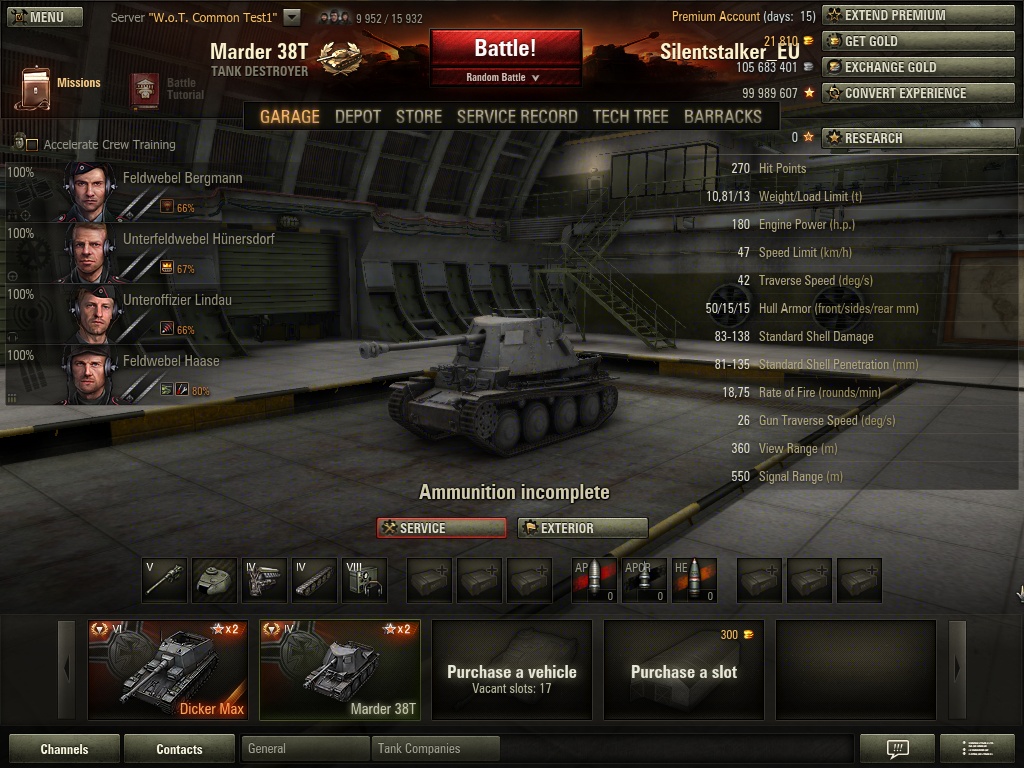 Okay, despite testing it only against “soft” targets (pretty much everyone in the battle had another 38T) I must say this vehicle is absolutely fantastic. It’s small, yet it packs quite a punch and boy it fires fast (18,75 ROF). Aim time is excellent, it’s reasonably accurate (0.35) and – what is most important – very hard to spot and fairly mobile (40km/h easily). As expected, the gun shield is thin, but it’s nothing that terrible. Its top gun is 110 pen 75mm – not the best penetration out there, but the golden shells can crack any hide. Carried ammo supply is sufficient (38 rounds). Gun traverse is fantastic, it’s very broad, but the vehicle doesn’t bleed accuracy when moving the gun too much and the depression is awesome. I love it. It’s much like Marder II on steroids (or if you will, Marder II before the major nerf).

Quite honestly, there is actually nothing I didn’t like about it. The gun performance with silver ammo against higher tier enemies perhaps, but it can handle the Chi-Nu Kai quite well on reasonable distance (that vehicle sure likes to explode from ammoracks). The only flaw is not so good elevation, which can lead to some awkward situations, but overall, I’d rate it very well. 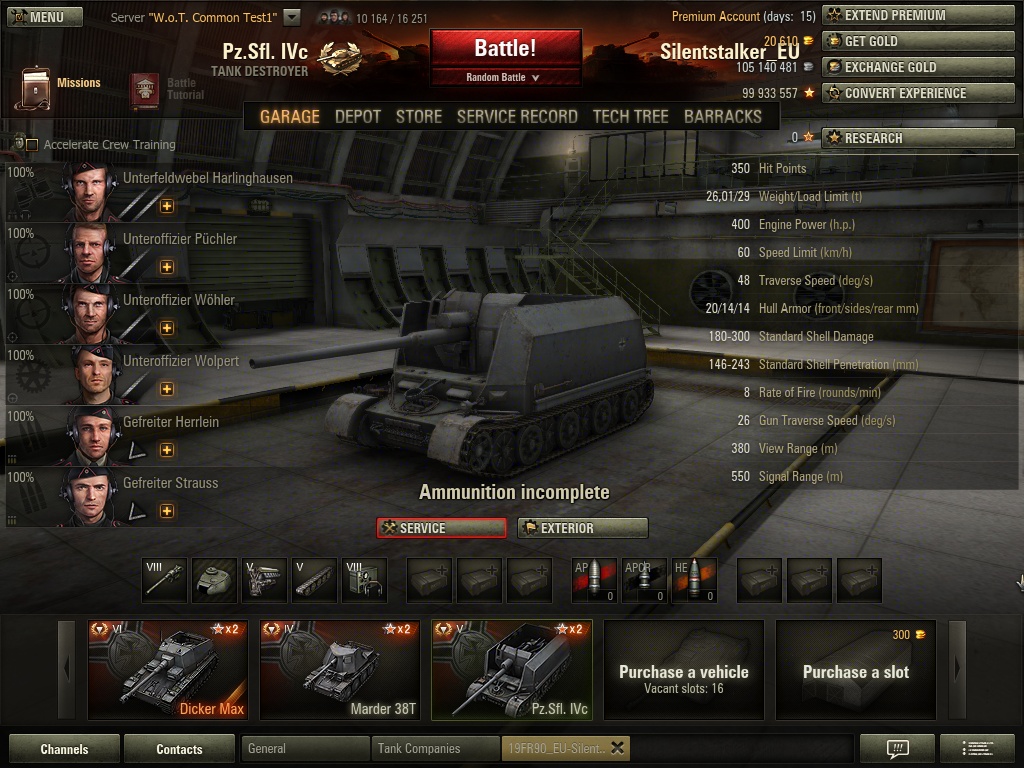 Well, as you can imagine from how this vehicle looks, it is pretty awkward. It’s not AS bad as you think, but it has three nasty flaws, none of them fatal, but together making it a very uncomfortable tank to play. First, it’s big as a barnhouse. That means low camo factor. You’ll spot this beast halfway across the map – it’s quite a change from the nimble and stealthy Marder! Keeping low profile and holding back is a must – the armor is non-existent, HE shells penetrate it regularily (even mid-tier gun HE) and they do MASSIVE damage. If you get spotted and don’t manage to oneshot the enemy, you’re dead, period. It’s an extremely fragile TD.

Second flaw is the terrible traverse angle. The gun has probably even worse traverse than Dicker Max (well, not probably, definitely) and if you know how to play the DM, you’ll feel right at home (at least regarding the traverse). With the thin armor and huge size, the fact you have to move the vehicle to traverse the gun makes you a huge target. You HAVE to stay back, no matter what.

Third flaw is bad depression. Strangely enough (probably “thanks” to the AA mount) the elevation is very good (unlike on the Marder), but the depression is pretty terrible, so you can forget about Dicker Max tactics.

The vehicle fragility makes it basically an XP pinata, but it’s not all doom and gloom. The vehicle is fairly mobile and it can get to position fast. It’s not a tank for impatient people – if you rush, you die, but if you need to go somewhere fast, it will get you there, with the elite engine of course. Theoretical maximum speed is 60, but don’t expect to run around like a light tank, you’ll be doing 30-40 at most. Luckily, it snaps the speed fast and is very agile, much more than you would expect from such a beast. The gun is excellent too, as you probably realize, it fires reasonably fast and practically equals the 88mm L/71, just that you have it on tier 5! If you get lucky, get far away from the enemies and manage to get them in your sights, you’ll wreak havoc. Also, for a vehicle of its tier, the ammo supply is very sufficient, perhaps too much. 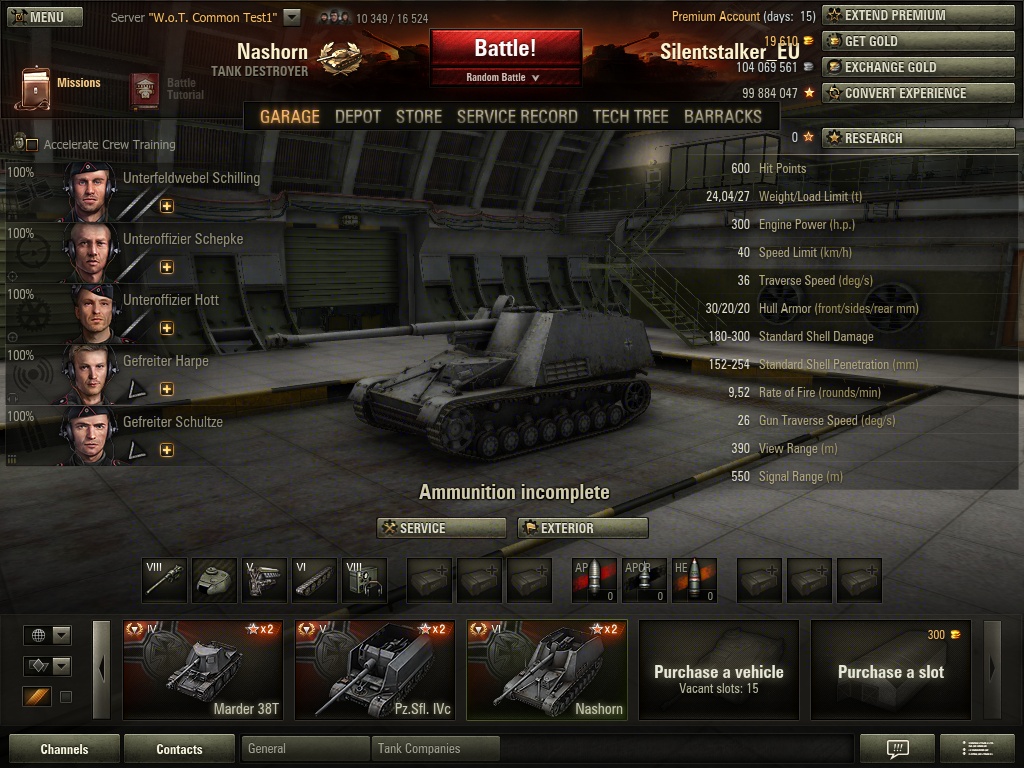 Well, now we’re getting somewhere. Nashorn is a classic. It’s like Dicker Max. On steroids. Mixed with crack. Nah, I am overestimating it a bit.

Nashorn is – as I mentioned – much like Dicker Max. It’s open topped, rather mobile (but don’t expect a Hellcat, you will be moving at 30-40 km/h) and has massive accurate firepower. On the down side, it’s very, VERY fragile (at tier 6, 20-30mm armor won’t cut it) and if you get hit, you are dead. If you didn’t skip the previous vehicle, it probably gave you a good idea what you’re dealing with.

This is NOT a vehicle for newbies. Unlike its other tier 6 counterpart (Jagdpanzer IV), it’s extremely fragile. From what I could tell, its camo factor isn’t all that excellent, I got spotted several times at large distances. You HAVE to stay back and away from enemy scouts. You can be sure that with such a thing armor, you’ll instantly become a priority target. If you watched the Pentagon Wars movie, the Bradley vehicle description (“armor less than a snowblower and enough ammo to take out half of DC”) applies here. And if you haven’t seen it, go and watch it, it’s brilliant :) Last negative factor is rather poor depression. But that will get better, don’t worry.

On the plus side: the mobility is fairly decent, especially on flat surfaces. The traverse is excellent (much like the Marder one) and the gun is just yummy. Tier 6 with long 88? Yes, please. Aimtime and reload time are both very good (1,9s, 9,52 ROF). If you manage to stay hidden, you’ll wreak havok.

Somehow though… I expected better. It’s probably the mobility that disappointed me a little, but it’s a good TD. 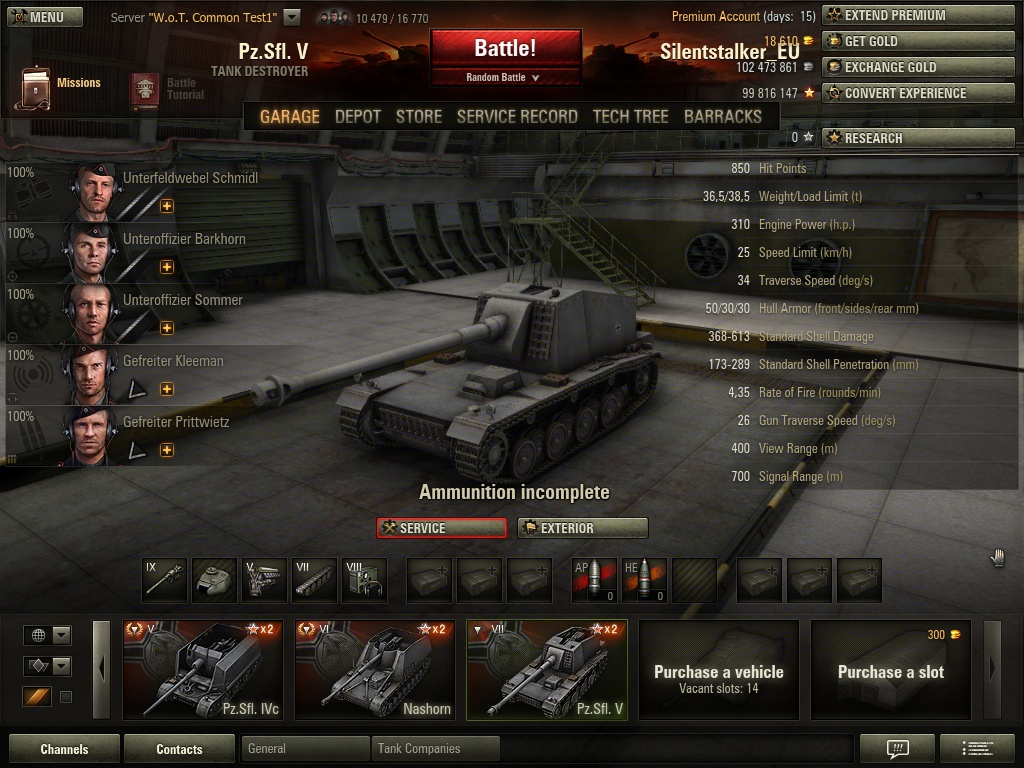 Well, this is certainly an extreme vehicle. It has several very strange properties, together offering a pretty unique combination. As you probably know, this was one of the most awaited vehicles ever – and for a good reason. 128mm cannon at tier 7. Well, let me tell you, its firepower is BRUTAL. Yes, the gun is absolutely awesome. A tier 9 gun on tier 7 vehicle, with 231 pen and 490 alpha – not bad! Plus the decent 0.36 accuracy. The ROF is bad of course (4,35), but nothing that could be handled. There’s a price though: this vehicle has no golden ammunition, only regular AP and HE shells. Strange, isn’t it?

Hmmm, let’s face it, it would be totally OP with 270+ penetration. But the real question is: is it OP even now?

Not really. The gun is brutal, yes, that much is true. BUT there are some significant drawbacks. First, the traverse is terrible. It’s like tier 5 all over. Annoying on a vehicle that relies on stealth. And it does rely on stealth, make no mistake. The only tough spot on its hide is the mantlet, that can occasionally bounce a few shots. The rest is paper and for added extra annoyance, it has the engine in the front, which means constant engine damage from anything, including really puny guns. And don’t let me get started about the engine fires. No, this vehicle can’t afford to take damage.

Another strange feature is the depression, that is pretty extreme: 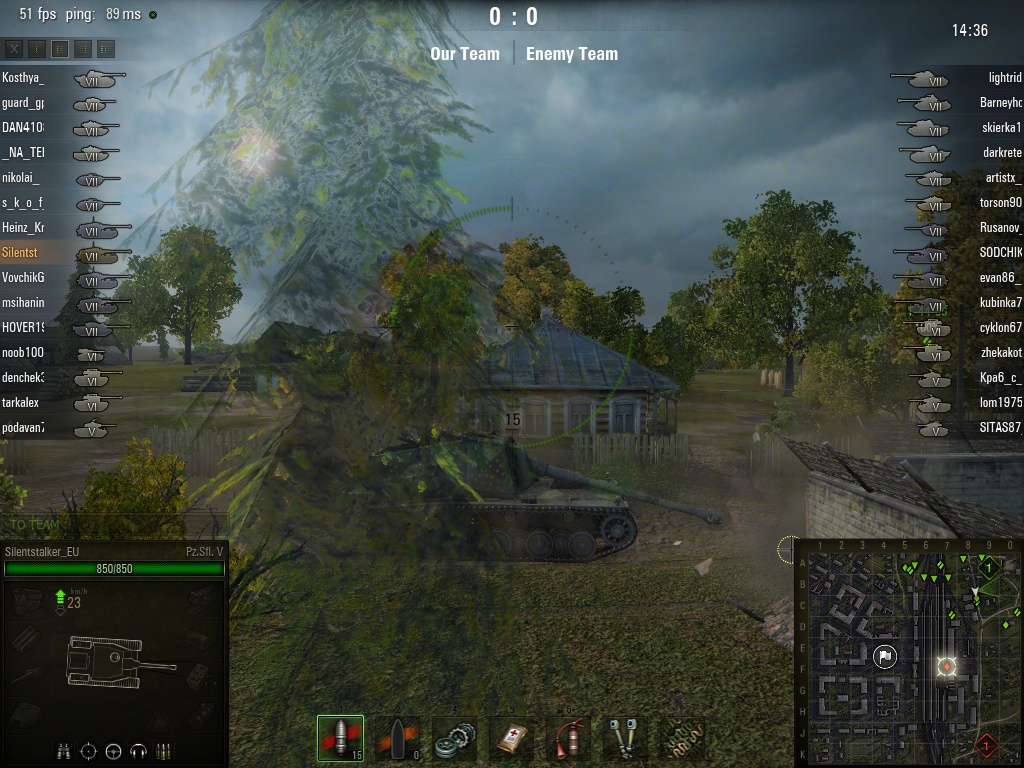 The elevation however is not very good. And then there is the mobility: this TD will rarely go over 20km/h even in its elite configuration. It’s again surprisingly agile, but that won’t most likely save you, when facing anything up close. For this TD to work, you have to have a plan where to go. If you get exposed while executing it, you die. As with the previous tanks, it’s an XP pinata for the enemies, so expect to be their primary target as soon as you appear on their radar.

Oh yes, and one last thing: it carries only 15 shells. You have to make every shot count basically. Not that easy with 230 pen against T8-9 vehicles. Overall, it remains to be seen how successful this vehile will get, but I wouldn’t expect high winrates: this is not a TD for newbies. 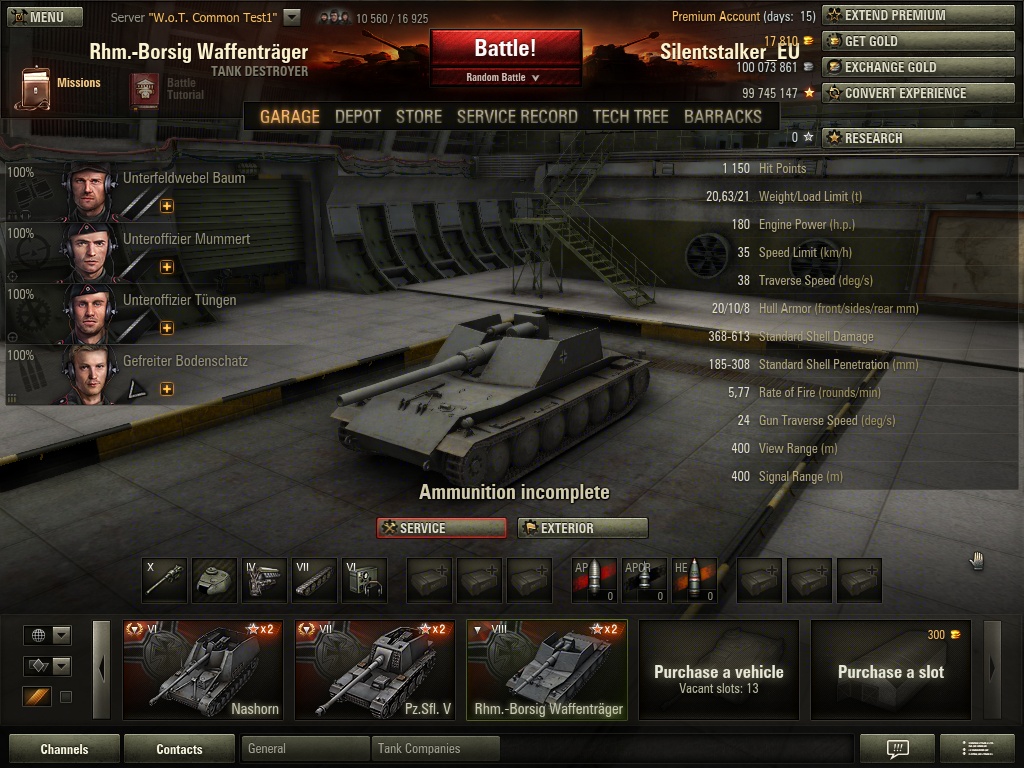 This whole branch has one element common to all the vehicles (well, apart from them all being paper): each vehicle has completely different gameplay style from the previous one – and WTR is no exception.

There are several defining features of this vehicle. First, it’s paper (yet again). Second, it’s very long – like TOG long. Not very practical when hiding sideways. Third, it has a fully rotating turret. That’s awesome. Fourth, it has two guns, that actually are pretty much equal (both are tier 10), despite the fact one of them is “stock”. 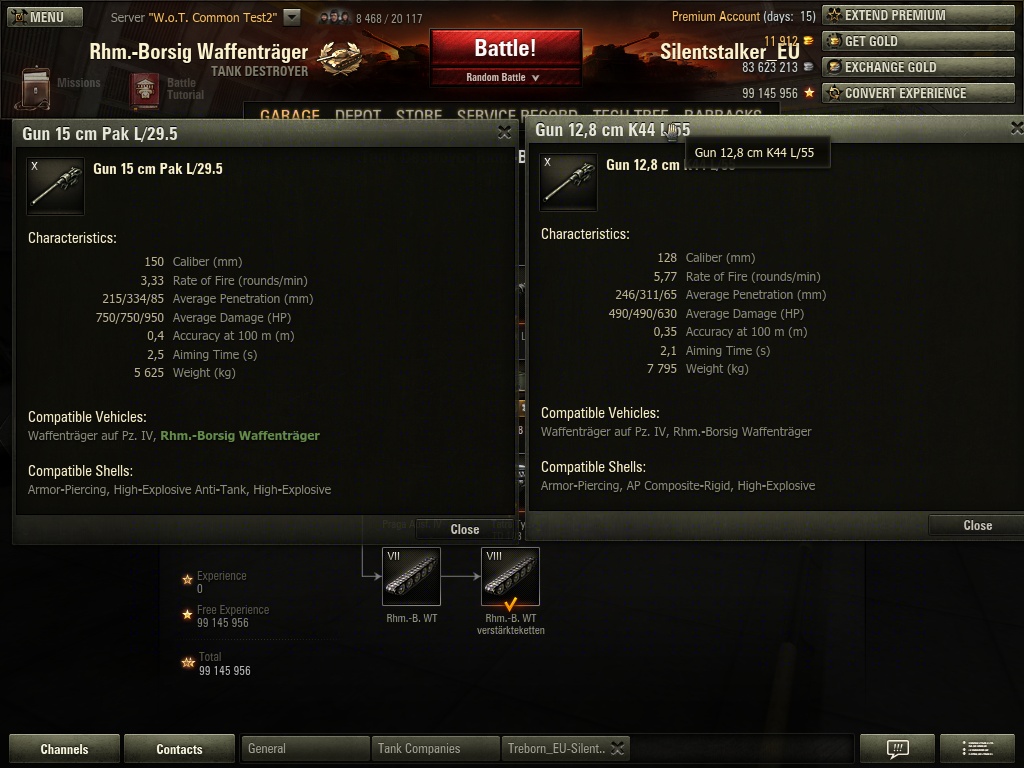 In fact, I must say, I prefer the “stock” 128mm better. The depression is not terrible, but it’s average at best, the elevation is quite good with both guns. The second gun (150mm) IMHO works only with gold ammo. Tried with the regular setup, everything bounces. I think tbh that’s pretty lame, but at least the 128mm is there. Accuracy is okay for both guns (well, for their type anyway). The turret actually rotates quite fast, of course not as fast as on a tank, but could be worse. Camo factor is not very good tho. This vehicle does see very far, but the problem is so do its opponents and if you get spotted, you can get oneshotted easily. It’s very, very fragile.

The mobility is good, but it’s no race car: you’ll be usually going around 30 km/h. It is agile though, more than you would expect from such a large machine. It also carries enough ammo, no shortage there.

Overall, I think the vehicle is okay, but I can’t seem to “grasp” it right. Probably needs training.