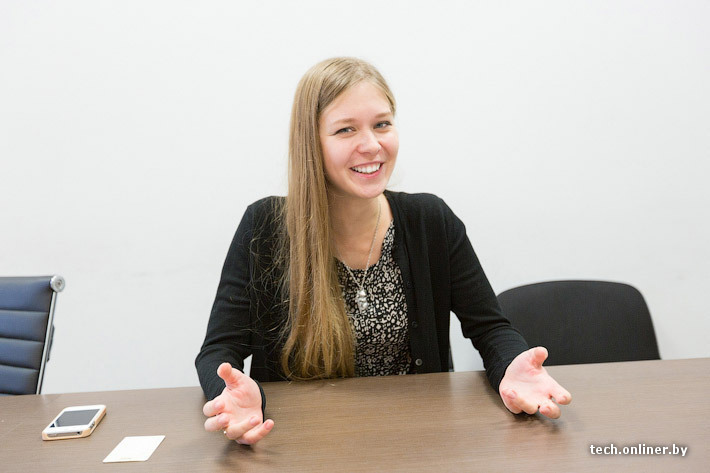 I generally ignore interviews, but this is pretty interesting (with emphasis on pretty :P) – a Belarussian portal tech.onliner.bu made an interview with Olga “Ola” Sergeevna.

I absolutely hate literal translations of interviews (boring, they take long time and some phrases are difficult), so I am going to simply put the info from the interview into points the way I do it with the Q&A.

- OS got to Wargaming as a support staff member because of the fact she finished the university, where she studied to become an interpreter, so she speaks English very well.
- she did play videogames before WG, but without any real preference, but she likes car race games, especially Need for Speed, she also tried Sims. She wants to try GTA5, but doesn’t have a console
- she did play on computer consoles only as a child, specifically on Sega and something called “Dendy”
- she got to work for WG as customer support staff member, because at that point WG was operating the customer support service for US and EU from Minsk, that was two years ago – after that she left the support staff and started doing something else, plus the WoWp and WoT:G appeared and other games too
- she liked the young and dynamic team, because every was creative and inventive
- previously, she played a lot of WoT, now it’s less because of work, has around 3000 battles on her RU account.
- she states that WoT:G (“Generals”) are very interesting, but the development is not finished yet
- she learned how to drive a real T-72 tank, when she was going on trips with the cybersports players, she tried at the simulator first, which is just like a real tank, only that you see a computer screen thru the periscope, unfortunately in the army (SS: Belarussian), you can’t be a tank driver when you’re a girl. When she was in the real T-72, she could only be the commander and told others where to go
- the T-72 episode happened when she met people from videomaking department on some corporate event and they were looking for a personality (SS: “leader”) to make the (then) new “video news” concept. That’s how she got to make the news.
- OS was popular in the support department and many departments wanted to pull her over to them, in the end she recieved an offer to become the assistant for the deputy director for global operations, she is still working on that position, along with the news making.
- she often goes to expos and makes reports from them, becoming effectively a “video personality”, this weekend she will be at WCG finals (SS: not sure the time fits)
- she states she didn’t want to be the prototype “pretty girl” news anchor, the videos were made popular by the “what went wrong” shots at the end of the news, she got inspired for that by Jackie Chan movies
- the videos are made with emphasis on making it interesting for people, as all the expos are in the end about the same, with the same companies and same products, they have to gather a lot of material for a three minute video. Her role is to write the words and to read them on camera, but she states the real heroes are the other video makers
- the videomaking is not her main line of work, that’s being the assistant, which consists of various tasks and she had to learn a lot of new stuff
- a whole bunch of people works on the video news: the producer who selects topics, the operators, translators, editors, proofreading the subtitles/voiceovers by native speakers. In total it’s 7-15 people per movie, plus external workers
- the English voice is a guy named “Ruslan Gabidullin”
- the “Wargaming TV” project (the news) started with 4 guys and a producer, first it was the news, then they added video gameplay guides and player movies, now they use crowdsourcing: players send them their replays, cartoons and guides, currently the video department has 40 people
- Russian Youtube account has 1,25 mil subscribers, average video piece gathers 300-500k views, with the really good ones having over one million views
- apparently, video department actually reads the comments under videos, but only constructive ones, most are just trolling though
- she states regarding War Thunder and other competition, that World of Tanks is an unique product that was first in its niche and everything else are just knockoffs. On the other hand, she states the competition makes them improve the game more than when they were alone in the genre and that’s healthy
- hobbies: she likes travelling and figure skating, she was also dancing ever since she was 5 until 18, but can’t anymore, because she has to go on business trips, she’d like to do that again
- she actually rarely meets fans on expos, because few recognize her in real life, despite her “fame”